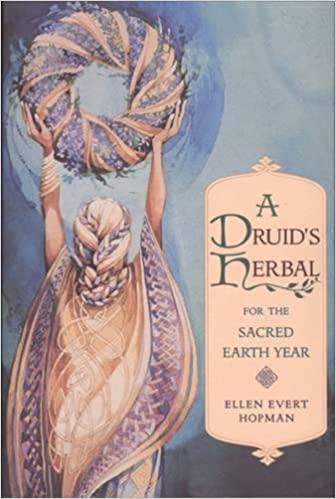 I came to review Hopman’s book because of my reading and review of her most recent book, The Sacred Herbs of Samhain: Plants to Contact the Spirits of the Dead and of the manuscript of her yet to be published book, The Sacred Herbs of Spring.  Though this book is 25 years old, what Hopman offers is timeless.  It is a wonderful introduction to the ancient Druid rituals that are still and even more meaningful in this 21st century.

The Druids were the healers and shape-shifters of the Celtic era, the poet-priests and priestesses who could prophesize the future. With their study of divination, magic, astrology, nature, and herbal medicine, their poetry and songs of incantation could raise the winds and fog and could dry up lakes.  The Bards, the story-tellers for the long winters and for such ceremonies as wakes, weddings and baby blessings, had the ability to listen to the voices from the otherworld and provide guidance, instruction, and knowledge, often providing it for the Celtic kings and chieftains.  The Ovates, the keepers of prophesy, were the executioners of prisoners and the criminal outcasts.  The Celts believed in reincarnation and were polytheistic with each deity holding special functions.  Their three tiered world was the water world of the ancestors, the land of the earthy beings and the sky world of the deities.  The months of their calendar and the letters of their alphabet were given the names of trees.

The Druidic herbal medicines were prepared as they are today as teas, salves, tinctures, poultices and syrups, as well as homeopathic dilutions.  The magical uses of the herbs were administered while in a hypnotic state of consciousness and through spells, a state of consciousness that I attain through ecstatic trance.  The herbs for each of the eight spokes of the cycle of the year is the valuable core of the book, each herb presented in a clear succinct manner including its preparations, and its medicinal, homeopathic, and magical uses.  Mistletoe is important for three of the eight spokes of the wheel of the year, the winter solstice or Mean Geimhridh, the summer solstice or Mean Samhraidh, and Lugnasad that falls halfway between the summer solstice and the fall equinox.  Growing up in California where Mistletoe is very prevalent, I often collected it during the summer for our celebration of Christmas.  I now wonder about mistletoe’s role for the Celts with it growing in the warmer latitudes of California and not in New York or Pennsylvania where I have lived for the last 40 years. Hopman though reports that at least one species grows in northern Europe.  Mistletoe’s great sacredness to the Druids may be due to its greater rarity in these cooler climates. Its twigs and leaves are used for strengthening the working of magic, and for their importance in healing, protection and for producing beautiful dreams.  This parasite is one of the 14 herbs sacred to the druids, possibly the most important next to the oak upon which it often grows.  Research has shown that it stimulates the immune system, inhibits some tumors by activating the killer cells, and it is used to temper epilepsy.

From my love for and writings about the Icelandic Edda, I am familiar with the dart of mistletoe that was used to kill Baldr, the gentle and beloved son of Odin.  There was nothing else that would harm him, a promise made to his mother by every other substance.  Then, at the time of Ragnarok, the final battle with the demise of the gods of war, the gentle Baldr is reborn to lead us into a gentle New Age, a hopeful prophesy.

The herbal alchemy of the Druids defines a relationship between the Earth’s herbal forces and those of the celestial spheres, a system that classifies each herb by its planetary affiliations to the Sun, Moon, Mercury, Venus, Mars, Jupiter or Saturn.  For example, Mars is affiliated with the thorny and prickly plants with a strong acid taste, plants that help with motor nerve, muscle, and left brain problems.  These plants include nettles, hops, garlic and onion.  The sun’s herbs are orange, reddish orange to yellow and are nourished in the warmth of the sun, herbs such as butterbur, borage, motherwort and grapes which are used to help with problems of the heart, circulation, and the spine.

The rituals and celebrations of the Druids take place in the groves of sacred trees such as oak, rowan and hawthorn, rituals that involve repeatedly walking sunwise around the sacred hills, springs, stones, trees and fires, acts that reflect the desire to live in harmony with the cosmos.  Every tree, spring, well, rock, valley, mountain and body of water has its own animating spirits that reveal its sacred relationship with all other flora, fauna and minerals.  At these sacred places poetry, legends and song find their fullest expression.  At these places sacrificial gifts are offered to the deities and fairies to gain their support in providing for a fruitful life.  The twenty-one described herbs used for consecration and purification include Agelica, Asafetida, Basil, Cedar, Juniper, Mistletoe, Sage, and Valerian. Many of the described herbs are also used in funeral rituals and rites and for the journey into the Otherworld, herbs such as Elder and Hawthorn.  For marriage under the Oak the many herbs used include Anise, Apple and Maple.  For bringing peace and prosperity to the home the herbs used include Bay Laurel, Mandrake, and Plantain; and for the rites of passage from birth, for infant naming, and for puberty the herbs used include Ash, Birch, Holly and Rosemary.

These hypnotic and magical rituals beautifully bring alive our need for a harmonious relationship with the Earth and the Cosmos. These rituals are more relevant today than ever because of our separation from our one and only Earth that has occurred over that last several centuries because of our greed, separation that has led to our current battle for survival because of the climate crisis.  I still maintain that there is hope, hope for us to enter the beautiful New Age if we again reconnect with the sacred Earth and the Cosmos, a connection that was very much alive for our ancient hunting and gathering ancestors from the era of the Celts and Druids.