A Review of Welsh Artist Christopher Williams by Alison MacRae

When you read or hear the name of the Welsh town Maesteg, what comes to your mind? 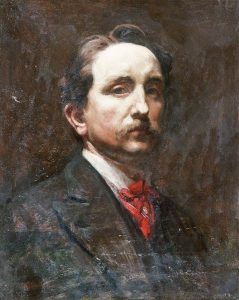 It is famous for rugby and football players, so that’s what you might be thinking if you’re a sports fan. In the art world, however, the name Christopher Williams would automatically come to mind.  This golden nugget of a man was never given enough accolades, in my opinion. He did Wales proud with his paintings.

Maesteg is a town in the community of Bridgend County, Borough of Wales, in the Lynfi Valley. The English translation is “Fair Field”. Welsh Gaelic is part of their language along with English. Christopher Williams was born in 1873. His father had high hopes that Christopher would become a Doctor. Christopher had other ideas.

It all started the day, when as a teenager, Christopher went to the Walker Art Museum in Liverpool. He spent hours looking at Frederic Leighton’s painting called Perseus & Andromeda, which steered him on his path to becoming a painter. He studied at Neath in the Town Technical Institute in 1892. In 1893, he went to the Royal Academy. In 1910, he received a prestigious invitation from the Royal Society of British Artists to join their ranks, and he had nearly 40 of his paintings in the gallery over the next ten years.

In 1911, Christopher painted three portraits of David Lloyd George (he was the British Prime Minister, born in England and whose parents were Welsh). Lloyd George commented that Christopher was one of the most gifted artists Wales had produced. Real success came that year when he was commissioned to paint the Investiture of the Prince of Wales at Caernarfon Castle by King George V.
Another of his crowning glories was the painting of Mametz Wood, which portrayed the 38th Division of the Welsh Fusiliers during the Battle of Somme in WWI.

To make it so realistic, Christopher visited the battle site and used soldiers who had fought in it. They were engaged in fierce hand to hand fighting against the defending Prussian Guards before finally emerging victorious. Never before had a Bayonet charge been so realistically portrayed. It hangs in the Museum of the Royal Welsh Fusiliers in Caernarfon Castle. The name of the painting is called Welsh Charge at Mametz Wood.
Christopher had many accomplishments, including a collection of portrait paintings that he did of Welsh noblemen of the time, which hang in the National Library of Wales. He really only did portraits of the Welsh, and if they were not born in Wales their parents or their ancestors would have been.

Christopher Williams has a lot of his paintings in the National Museum of Wales. I did find one portrait of Sir Henry Jones. It is hung in the Hunterian Museum & Art Gallery in the University of Glasgow. Yes, indeed, Glasgow. The University of Glasgow was his Alma Mater. Christopher went to the University on a scholarship to be a Presbyterian Minister. He also married a Scottish lady, and they lived in Scotland.
Until his death in 1934, Christopher unknowingly did a lot to stimulate an interest in art in Wales. He also loved to go to the seaside, and the painting he did of his wife sitting on the rocks at the seaside called The Red Dress is remarkable. That was how people dressed to go to the seaside in Christopher’s days. Such elegance comes through in that painting.
Christopher Williams had a great love for humanity and empathy for people. This was noted when he donated a painting to the Salvation Army that he had done at the Thames embankment at night. It was called Why.

Christopher Williams had two sons, and one was also a famous Welsh painter called Ivor. Ivor had two daughters. One is an artist the other is a potter.
So the talent has been handed down from generation to generation how wonderful is that the name Williams lives on in Wales. 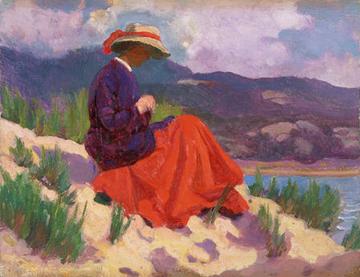 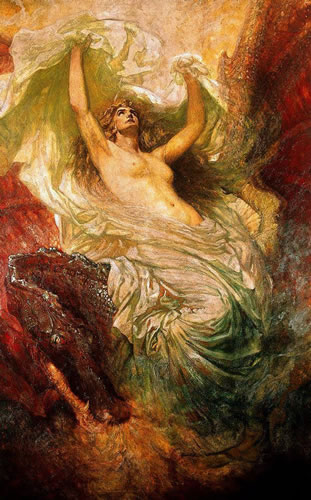 Deffroad Cymru, the Awakening of Wales 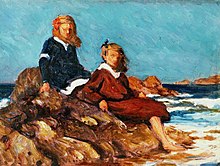 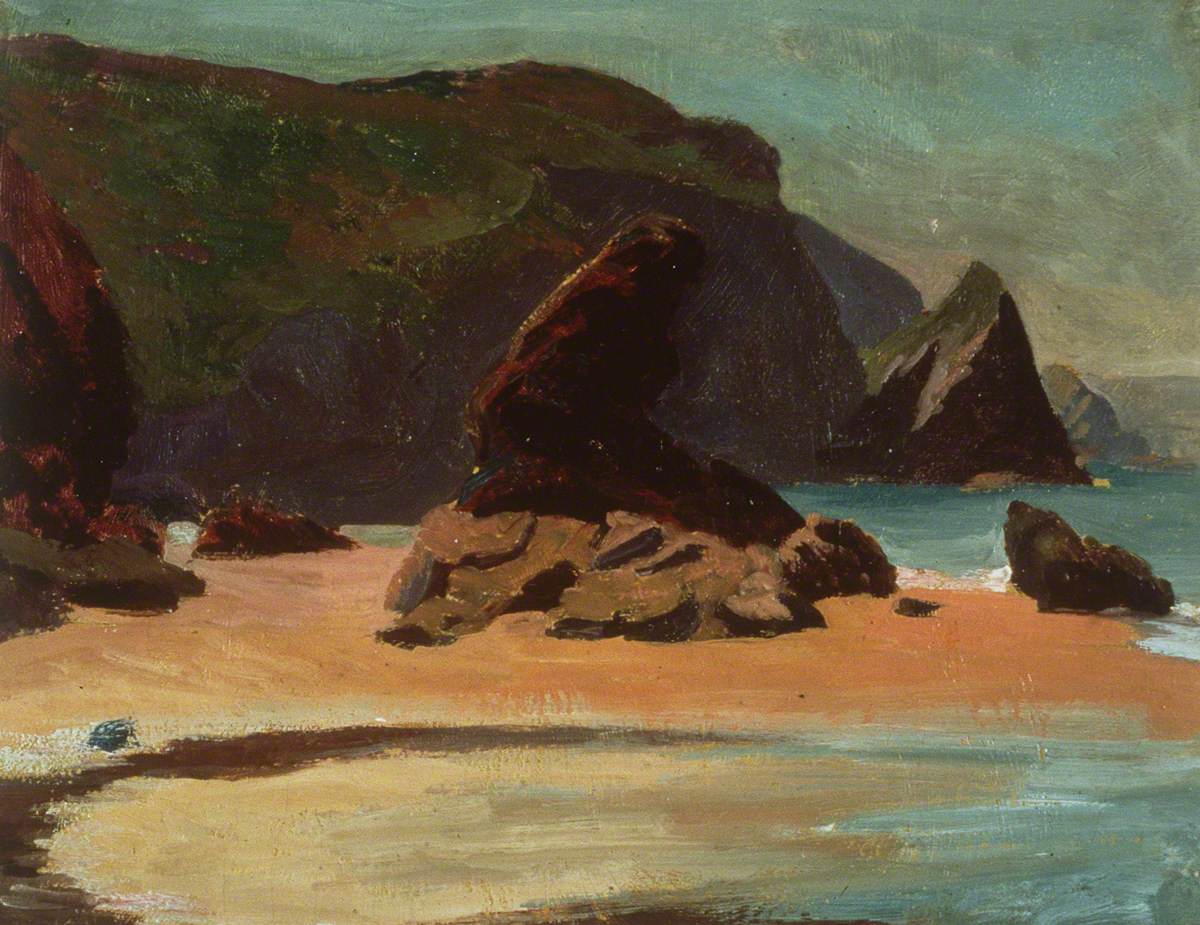 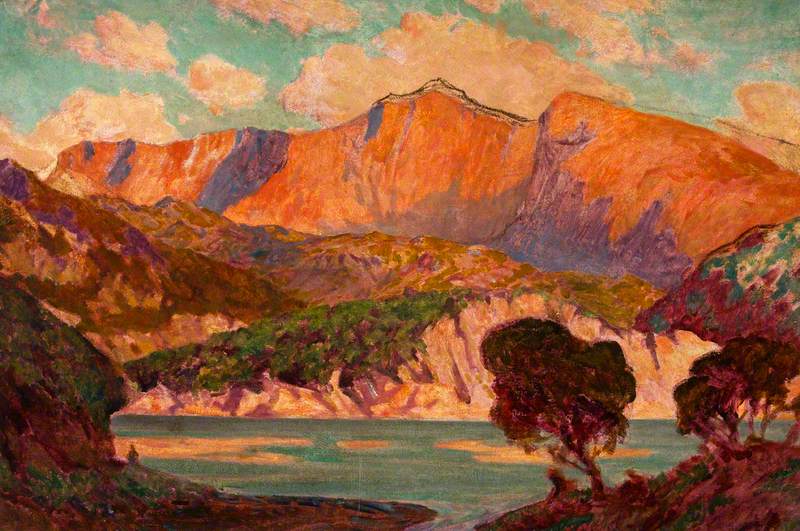 Mountain Landscape over a Lake with Trees in the Foreground 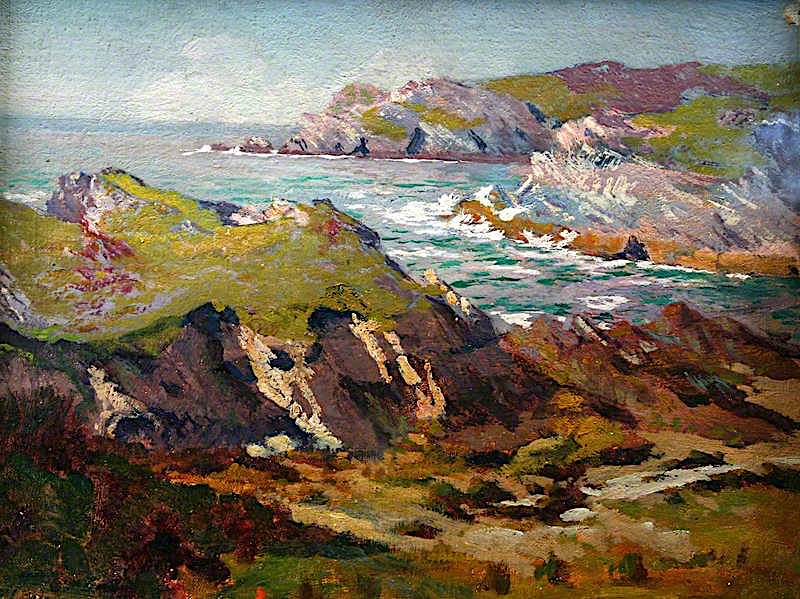 The Remorse of Saul 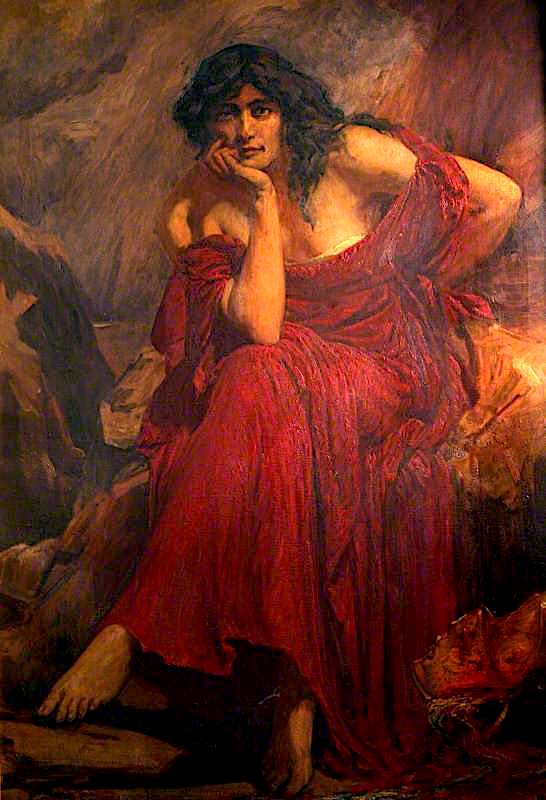 The Investiture of the Prince of Wales, 1911

If you enjoyed this article, please DONATE to Alison MacRae