Arawn – King of Annwn, the Welsh Otherworld by Arian Niwl

I am interested in Welsh lore and mythology, and it is sad that so much seems to have been lost over time. Though the Welsh were subjugated at least for a time by the Romans, the Cymric tribes managed to hold off the Angles and the Saxons to the point that there was even a large ditch or dyke put into place to delineate Anglo-Saxon England from Wales. This dyke known as Offa’s dyke was put into place in the eighth century. 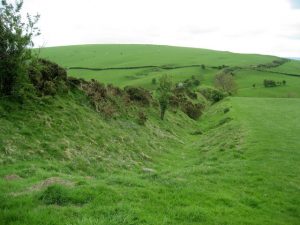 The Cymric tribes even managed to hold off most of the northern raiders more thoroughly, though there were settlements of Norse in Wales and there was always continued raiding from the Norse king in Dublin and the King of the Outer Isles located north. So, one would think more would have been preserved than it has, but all the lore was passed down orally and the only written down later by Christian monks and that was through their religious filter. None the less, I think it is a testimony to the bards and strength of the stories themselves that as much as managed to make it to us in this later age.

Now then the poem above leads me to think of Arawn, who is the king of the Welsh Otherworld called Annwn. 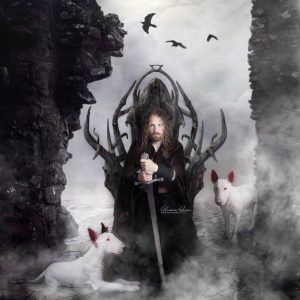 The realm of Annwn, the Otherworld, the land of Fairy is a land considered to be a blessed place, a place described as no hunger, death, disease or time ever touches those there. The name Arawn itself seems to have an uncertain origin being sometimes given as a Welsh from of Aaron, which is Hebrew for “exhalted”. Others link the name to the Continental Celtic god Arubianus. Aaron was known from Roman times at least so it is possible, but at this point in time nothing is certain for sure.

Arawn figures most prominently in the first branch of Mabinogi. It is here that he tricks Pwyll who has somehow followed a white deer with his own hounds into the realm of Annwn. There he finds the deer which white hounds with red ears have taken down. These are the Cŵn Annwn, hounds of the Otherworld. They are described as being very large, dire wolf size or larger, white as new fallen snow with bright red ears and glowing red eyes. It is said that the baying of the hounds is loudest when furtherest away and goes softer as they get closer. 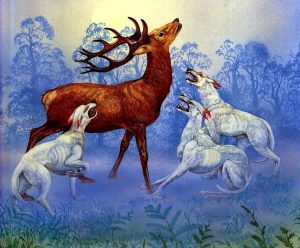 Pwyll drives the hounds off the deer and then Arawn shows up claiming an insult that Pwyll has trespassed on his lands and then tried to take his prize. Pwyll agrees after a point and asks how to make amends. Arawn then asks Pwyll to take his place for a year and a day to then fight his rival in Annwn who is Hafgan. Pwyll agrees and Arawn magically transforms him to resemble himself and says that he may sleep with the “Fairest woman in all creation, his wife. Pwyll but does not sleep with Arawn’s wife and after a year and a day defeats Hafgan in combat, thus paying his due to Arawn. Arawn becomes king of all of Annwn.

Arawn befriends Pwyll, not only for honouring his vow but also for foreswearing to sleep with Arawn’s wife. This is a friendship that continues even after Pwyll’s death to his son Pryderi who is gifted with otherworldly pigs from Arawn.

Another source in which Arawn then figures prominently is the Cad Goddeu or the Battle of the Trees attributed to the Welsh bard Taliesin. It seems to be the cause that Amaethon ab Dôn steals three magical animals from Arawn (a dog, a deer and a lapwing). Arawn declares war against him and Amaethon is aided by another son of Dôn, Gywdion who is also a skilled magician. In the end, Arawn is defeated. 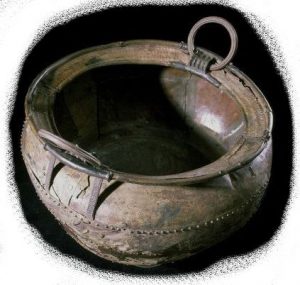 Preiddeu Annwfn is an odd poem found in the Book of Taliesin that briefly mentions Arawn. The tale recounts an expedition in which King Arthur travels to Annwfn or really Annwn, the Welsh Otherworld. Arawn was the owner of a magical cauldron with rejuvenating powers, that would not boil a coward’s food. Thus, Arthur leads a quest into Annwn, Arawn’s Kingdom, to steal this precious artifact. The cauldron is said to have the power to restore life but left the victim a mute. This part of the tale is suspiciously like that of Bran the Blessed in the second branch of Mabigion. Arawn is further linked to Arthur by some scholars as being an antecedent of Alain li Gros who was keeper of the Grail and father of Perceval li Gros, one of Arthur’s knights. Perhaps the magic cauldron then was later Christianized to become the Holy Grail.

Besides being a great magician, Arawn is portrayed as a great hunter and it became connected that in the fall season – when Calen Gaef which is considered the first day of winter in Wales (November 1st) comes around – that Arawn and his hounds would go hunting for any souls of the dead that had not crossed over and take them to the Otherworld. He would continue his hunt throughout the winter until the coming of Calen Mai, the first day of May, when it became summer again. Thus, Arawn and his supernatural hounds the Cŵn Annwn became associated with escorting the souls then to the Otherworld.

As an aside there is an asteroid registry number 15810 that is named Arawn after the Lord of the Otherworld.

Arawn on his throne digital photograph by Adrienne Roisin.