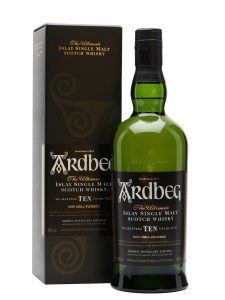 Scotch, if you even got a bit of Celtic in your genes you know this lovely drink.  If you have a bit more you know the best to anyone with a palette for fine Scotch will go with single malt.  If you are not familiar single malt means made in one and only distillery, whereas blended is more than one distillery or maltings.

Now where we are going with the current review of Ardbeg 10-year-old Scotch Whisky is this is a peated scotch from the island of Islay. Now Islay is an island off to the west of the main part of Scotland and southernmost island of the Inner Hebrides.  As you can find it was once part of the Gaelic Kingdom of Dál Riata before becoming part of the Norse Kingdom of the Isles.  Now more up to modern times Islay is one of five whisky distilling locations and regions in Scotland and whose identity is protected by law.

The scotch from these Islay distilleries are known for a strong peaty flavour.  So, what is peat?  If you are not familiar, peat is an accumulation of partially decayed vegetation. It develops in areas where organic matter is covered by water before it can fully decompose. Eventually this partially decayed material forms peat bogs. Now in the islands of western Scotland, especially on Islay peat has been used and burned to produce heat.

When peat is burned to kiln malted barley, the smoke from the peat would be absorbed by the grain, a phenomenon referred to as peat reek, and it would be passed on to the whisky. This has continued to this day in this region to make the scotch.

The peat adds a smokey flavour to the scotch but also makes a very nice softness with a slight acidic fruitiness. There are some hints to me of vanilla and spice that lingers nicely on the palette of this light yellow coloured scotch with a slight lingering taste of the smoke.  Ardberg is getting a bit pricier but  still is fairly inexpensive for a good peat scotch.  If you have never had or tried a peat scotch you really could not go wrong with Ardbeg 10.