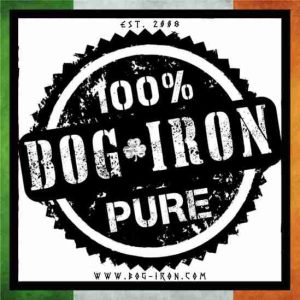 If ever Sons of Anarchy was transmogrified into a Celtic story, Bog Iron would be perfect for the soundtrack. This gritty, driving band harnesses a bedrock of heavy metal. The awesome lead guitar and rolling thunder of the drums and bass will bring down the walls of the best underground venues.
With Patrick Golden on guitar, Bog Iron conquers such Irish classics as Rocky Road to Dublin, Fields of Athenry, and Foggy Dew, most notably in their Pacific Grove Version. Patrick’s solos are outstanding; he is a metal demigod among mortals. He really hits his stride in Kerns and Gallowglasses, where he played all the instruments.
Keith Wieland just nails it on the drums, even though a recent shoulder injury has forced him to leave the group. Still, he’s a brilliant percussionist whose work really shines in She Moved Through The Fair.
But Bog Iron wouldn’t be where it is today without the keening vocals of John Michaels. Strongly reminiscent of Dave Evans (AC/DC), Robert Plant (Led Zeppelin) and Axl Rose (Guns n Roses), John does acidic renditions of Spancill Hill and Black Velvet Band.
In fact, Bog Iron really comes together in their newest album of the same name, The Star of the County Down. Embracing a more contemporary metal sound, they breathe new life into old favorites.
Lead guitarist, Patrick Golden was kind enough to sit down for an interview, so let’s learn more about Bog Iron.

Q: So Patrick, how did Bog Iron get together?
Patrick: Well, in 2007 I was playing in a cover band in Monterey. John Michael, who’s originally from Dún Laoghaire (Dunleary) Ireland, went into a studio that knew my band, and started laying down solo tracks with his acoustic guitar. The sound engineer suggested that John’s songs would sound good with a band to back him up, and put in some calls for musicians. I came on board, as did some others, and that was pretty much the beginning of Bog Iron.
The initial 18 songs took 18 months to record. I was part of some sessions because we weren’t really a band at that stage. But in 2008, John Michael wanted to do some larger gigs for holidays, like St. Patrick’s Day. The first band name was the Bog Iron Boys, which I really didn’t like, but after we first band members had begun playing for a few months, the name became Bog Iron.
But regarding the “bog iron” concept in general, I originally came up with the name by trying to think of a Celtic version of ‘heavy metal.’ I thought ‘iron’ would work, so I started searching the internet for anything “Irish + iron” or “Celtic + iron.” Eventually, I discovered bog iron, which is iron ore found in bogs and marshes. Smiths in Iron Age Ireland and Scandinavia discovered ways to extract the iron and use it to make weapons, tools, nails, etc… so, I thought, “Rad! Bog Iron it is!”
When I presented it to the group, they loved it. But we had a mandolin player at the time – he was only with us for a short while — and he suggested “The Bog Iron Boys” because it sounded more bluegrass. I mean, I love bluegrass too, but that’s not what I was going for. Still, everyone liked it and out-voted me. However, the instant the mandolin player left the band, I suggested we rename ourselves “Bog Iron”. Everyone agreed, and that was that.

Q: So where did Bog Iron go after you found your first groove?
Patrick: Some of the initial musicians fell away, and the group became a quartet. This was a nice feeling, more like a rock group than an ensemble. I’ve always been a metal guy, and the other members agreed that Bog Iron should have a metal sound.
I actually would have liked to go heavier into metal, but being in a band is like being in a marriage. Compromise is important. So we all decided on metal/rock sound.

Q: Well, I love your sound. It is very unique.
Patrick: Thanks. Bog Iron doesn’t get the chance to rehearse as often as we want, but this gives us some fluidity. John Michael sings in a Sinatra cover band as well, and he can sing just about anything. We have rotated a few members in our rhythm section. Peter Sheehan, who is from Kerry, Ireland, is our bass player. Keith Wieland is our drummer. Our other “Keith”, Keith Graves, comes in sometimes as both our drummer and our bass player, though right now Keith G. is on the road with Kiss as Gene Simmons personal cameraman.

Q: So how did Bog Iron gain a following?
Patrick: We had a dedicated following in 2008, but interestingly, most people in Monterey are loyal to the local venues rather than to the individual bands. This made things a little difficult for Bog Iron because we don’t have any traditional Celtic instruments, which meant that local Celtic venues didn’t want to book us.
I gotta admit, this presented a struggle. We first thought, “Hey, we’re a different type of Celtic.” But not everyone was on board with that. Some people just had expectations of what a Celtic bands should sound like.
We found a more receptive audience when we played with other metal bands. Jose’s Underground Lounge in Cannery Row had a great metal scene. I actually played with another metal band back then called Vulture King. At Jose’s I would play a set with Vulture King and then play a set with Bog Iron. It was awesome.

Q: So take me through the 20-teens.
Patrick: Bog Iron broke up in 2012, but it wasn’t long before we all realized that we belonged together. We weren’t able to break into festivals for a while, though. In 2015 and 2016, we played at the Kern County Scottish Games and Bakersfield Celtic Music Festival. We weren’t playing a lot throughout the year because we all live in different cities.
At this time, we did have one album, a self-titled record which suffered from not having been recorded well, and I wanted another. This was difficult because, as I said, we all live in different cities. In 2016-17, I kept bringing up the idea of new recordings, so around Bog Iron’s 10th Anniversary in 2018 I made the decision to release something new – which ended up being two new records.
The first was Live Iron, a live album with recordings from our first ten years. The other was a re-mastered re-release of the original John Michael album that brought us all together in the first place. That wasn’t easy because I only had demo tracks to work with. I didn’t have the masters, so the work took a while. But I kept at it, adding some unreleased songs from those original sessions and brand-new guitar solos on several of the songs, and soon we released Echoes From The Cliffs Of Moher.

Q: Tell me about your band’s sound. It’s so unique, which is why I just love listening to you.
Patrick: Again, thanks. It’s always been John Michael and me in the front. We create a great deal of our sound. From the beginning, I knew that John’s vocals were so powerful that people would connect with the music, not the songs. That’s always been true for us. Me, I’m an old school metal fan, and I love to make our sound heavier. I try to play the guitar as though I were playing a traditional Celtic instrument. (I play the mandolin, BTW, but I haven’t really used it in our recordings.)
We get the best sound when John Michael and I collaborate, though here’s a funny story. John couldn’t make it to one rehearsal when we were finalizing our set for an upcoming gig. The rest of us were rehearsing songs from Cliffs of Moher, and I pushed them to more of a metal sound. When John heard the tracks, he wondered what the heck had just happened. But the more he listened to the changes, the more he came round and liked it the overall sound.

Q: I love the way you sing Celtic ballads. You make them sound like metal ballads. Tell me about songs like Foggy Dew and Spancill Hill. What influenced your choices on these arrangements?
Patrick: We have two arrangements on Spancill Hill. The original is the type of song that John likes to sing with his acoustic guitar. He wanted to perform songs like this live before Bog Iron existed. But then came that rehearsal that John missed, and I made Spancill Hill more metal, and that’s how we’ve played it ever since.

Q: I was wondering, are there any big bands you’d like to collaborate with?
Patrick: Big no, but there are bands we would love to collaborate with. One is Whiskey Galore out of Bakersfield. They are a very traditional Celtic Band with great energy and sense of humor that creates a natural magic whenever we are together. Another is The Pikeys out of Sacramento. They are a Celtic Punk band, and sometimes we are able to play together at festivals in California’s Gold Rush country. And finally, there’s the Black Eyed Dempseys, another great NorCal. Celtic rock band. We’ve had James Hill, the lead singer, on stage with us before to sing The Fields of Athenry. What a lad!

Q: You’ve spoken about your background as a metal guitarist, but tell me a little more about John Michael’s background.
Patrick: John is a great mimic. He can pull techniques from anyone. He has always sung. There was always music in his house growing up. He was born in Ireland, but he grew up in Palo Alto.
When he sings with Bog Iron he has a different sound than when he signs with just me – or with his Sinatra cover band. John Michael just knows how to sing like a rock star, but he pulls it back when he’s doing only acoustic work.
Interestingly, John and I hit a rift in 2016. We were both getting frustrated with a lack of progress for Bog Iron. I took some time off to play with a Pirate Celtic Punk Band called O’Craven. That was a lot of fun. We had costumes and scenery and character names. Mine was Wicked Dick Saxon. O’Craven had a good run, but the band burned out and I went back to Bog Iron. It was then that I remembered why I loved Bog Iron so much in the first place.

Q: What are your plans for Bog Iron?
Patrick: I definitely want to record a new album. I want to get John Michael back into the studio to write some new material. I have a handful of originals, plus I have some traditional songs that John and I have ‘done the Bog Iron thing to.’ One is Irish Rover. We’ve also thought about The Unicorn Song, which John always sings for fun when we’re together, so maybe watch for that one in the future.
I want to release our next album at the end of this year. I have a studio in my house, which really helps. I’m thinking about 10 tracks. I don’t like overly-stuffed albums. I prefer a well-curated album.
Here are two upcoming tracks:
Goodbye Gemini, which is about John’s Dad.
The Sailor, which is about the Viking Raid in Lindisfarne.
John Michael has also promised to write lyrics for the Jig of Liam Fitzmurderhorse, which is currently an instrumental.

Q: Anything more in the future for Bog Iron?
Patrick: The future is a good question. As I’ve mentioned, the band members live in different cities and it’s hard to nail people down. After the upcoming new album, I hope we can play more summer festivals in California.
Bottom line, we all love doing what we are doing, and we want to do it bigger and do more of it. So be sure to look for lots more from Bog Iron in the future. 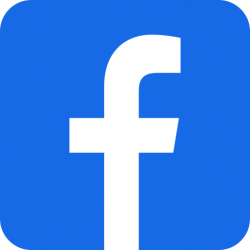 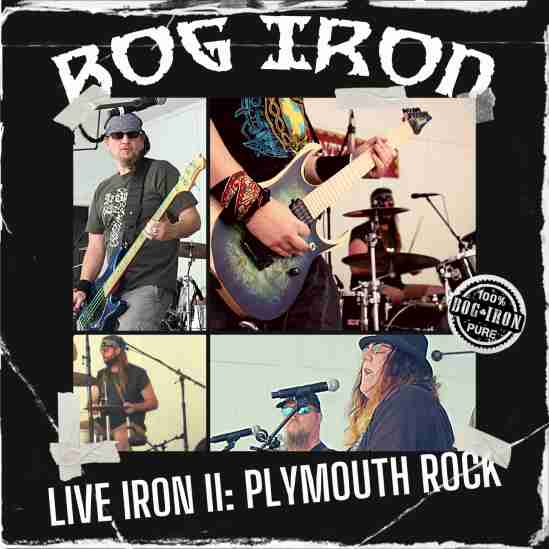 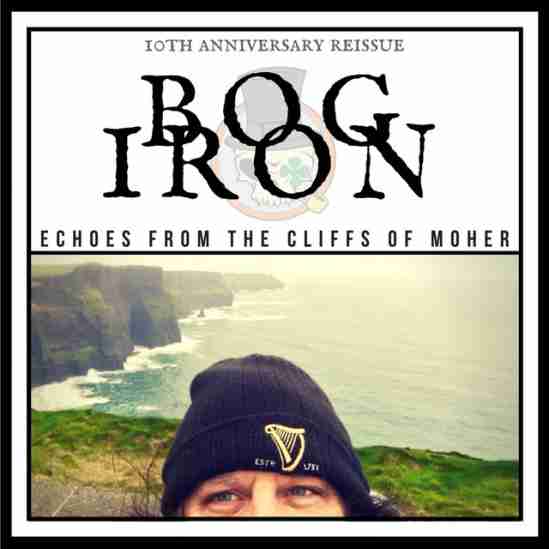 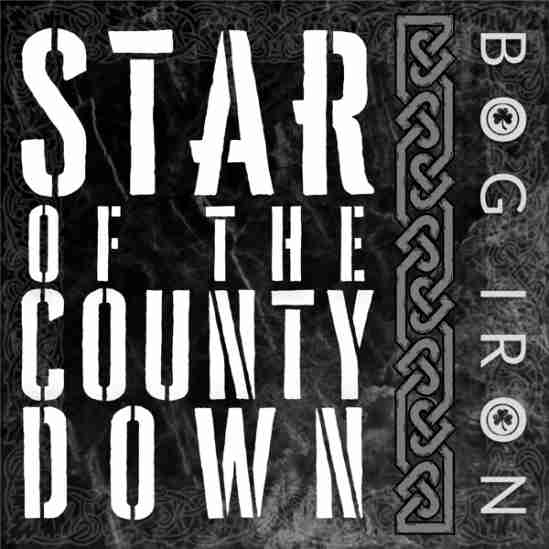 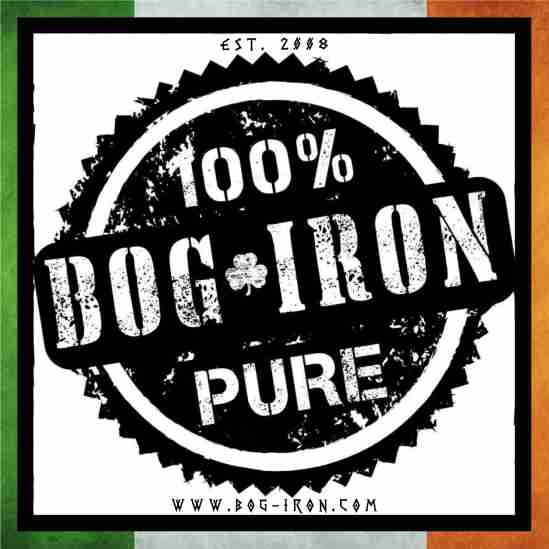