“Bran”, in general, means “Raven” in Celtic languages (“crow” in Welsh), which is appropriate for the soaring sound of this Czech Celtic band based in Prague. Founded in 1999 by Dewi Pajot, a native of Brittany (Lorient, France), along with some of his friends, Bran sings in both Czech and French (and occasionally some English). They have a modern sound with a folk vibe, which is both haunting and intriguing.

Interestingly, there’s an Eastern European connection to the word “bran” as well, as that was the name of Dracula’s castle. Not surprisingly, “bran” is an Indo-European word, pertaining to filth/dirt and crows/ravens, the perfect tie-in to the mood of Bran’s album, Le Carnet Noir (The Black Notebook).

Le Carnet Noir is an album of rich Celtic music. The rhythms and instrumentation are true to the genre, and the music is celebratory, moody, nostalgic, and haunting. I cannot say enough good things about this album. It’s marvelously compelling, innovative, and as a fellow musician I find it inspiring. The original compositions are brilliantly written and brilliantly performed. I would like to hear more strings, but then again that could be just my bias as a fiddle player.

At the time of this interview (originally written in 2014 for Celtic Family Magazine), the band members were unavailable for comment about Le Carnet Noir, so yearning for more information, I tried using Google Translator as a guide to what I was hearing – just for a glimpse of the subject matters of these intriguing melodies. It failed utterly with the non-French language, regardless of the language chosen.

When Czech is chosen, the translation was identical to the original it. When “Detect Language” is selected, pegged these songs as Afrikaans! Yet of course still provided no translation. Undeterred, I found a way to enjoy these great songs, and so here is my original review of the tracks in Le Carnet Noir. 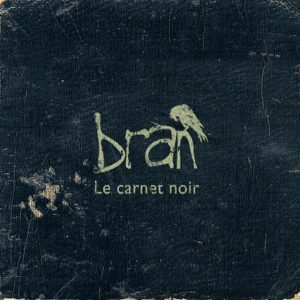 Marzhin Foll (Czech), Tri Martolod and Laridée-Gavotte are excellent examples of Bran’s traditional Celtic sound. These songs are evocative of the sea, possessing a rollicking energy that incites one to dance. Marzhin Foll has a combination of warm percussion with a great drum solo and accordion, and Tri Martolod employs lilting pipes. Laridée-Gavotte is indeed a gavotte played with a strong woodwind sound including pipes, clarinet and flute.

Quand Je Menai Mes Chevaux Boire – (When I Led My Horses To Drink, French) has a marvelous nostalgic sound invoking a smoky Parisian café of the 1940s. The accordion is the lead instrument and is complimented by strings and vocals and a sprinkling of pipes.

La Jument de Michao (Michao’s Mare, French) has an equine playfulness to it. It is predominantly vocals, bass viol and pipes. This track introduces an element of Celtic jazz featuring the flute.

An dro is another dance piece commanding a rich traditional pipe and accordion sound. The string and flute compliment the Celtic rhythms beautifully.

Lundi Mardi is a whimsical piece where the lead singer often whistles a refrain. It is a light, fun song with innovative jazz elements

Le Carnet Noir (The Block Notebook or possibly The Black Travelogue, French) is rightly chosen as the title piece. It is stunningly rich in emotion. It is in turns a dark and moody accordion, clarinet and bass contrasted with a lightly lilting flute. The minor key and rocking rhythms bring a grey day at sea to mind. There is a dreamlike quality infusing this instrumental with a delicious surreal quality. This is truly the pièce de résistance of the album.

Pe Trouz War an Douar is presumably in Czech. This is a sad, sleepy song evoking loss and a windless sea, chill and quiet in the winter. Lovely.

Le Phare (French – The Lighthouse) picks the mood back up with more Celtic jazz and jovial dancing rhythms. It is inviting and playful, fun to listen to.

La Croisée (French – The Crossing) combines a serious accordion enjoined with flute in a minor key. A saxophone and pipes interweave it with a feel of the coast of Lesser Britain, the briskness of sea breezes, warm grassy hills with an energy that builds as the song progresses. It comes to a crescendo of jazz, the fluting and sax together reminding one of Jethro Tull’s album Heavy Horses, which is a tribute to the Celtic horses of Great Britain.

I was finally able to sit down for a one-on-one with Bran’s lead guitarist, Vojtěch Jindra. Here’s my interview, which I hope you will enjoy. 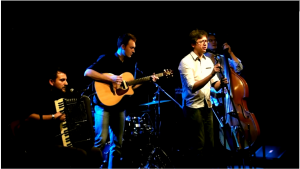 Caitlyn Johnston: I read that you’re from Brittany originally. When did you move to the Czech Republic?
Vojtěch: Well, I must say all members of the group are Czechs now. But Bran was founded in 1999 by Dewi Pajot, vocalist and multi-instrumentalist from Lorient, France, after he moved to Prague, Czech Republic. He was like father for the group and its musicians, starting and supervising the project. He strongly attracted people interested in Breton culture in Czech Republic, but then he moved to Canada in 2010. So it’s a little absurd – Czech musicians play Breton music, but we like it and our Breton friends are still our fans. So we are happy with it.
CJ: When did you become interested in music? Is your family musical (meaning, did they sing or play instruments)?
Vojtěch: I started with classic guitar when I was eight. Later I found rock music and then I started to listen to folk and world music. My parents are amateur musicians, they play every week in a pub just for fun. It’s interesting that the music they liked to play is music inspired by American traditional music. This Czech version of country music is still quite popular in Czech republic.
CJ: When did you become interested in Celtic music?
Vojtěch: I became interested in Celtic music in 90’s, when I was teenager. I listened to albums by Alan Stivell, The Chieftains, Solas… And I was interested in mixing of Czech traditional music with contemporary genres. I tried to found a group playing this type of music, and I started playing guitar in couple “Irish” groups. I listened to various music, but I – as musician – prefer folk and world music.
CJ: I love your album, Le Carnet Noir! Some of the music is indeed dark and moody, and yet it is accompanied by the lightness of the flute. What was the inspiration for this style?
Vojtěch: It’s such a melting pot of different styles. I was affected by diverse styles of music. Classic, jazz, folk, rock. And so different artists such as Bob Dylan, Miles Davis, Jethro Tull or Depeche Mode. And a huge amount of Breton, Irish, Czech and Moravian traditional music…
CJ: There’s jazz worked into the Celtic tunes in La Jument de Michao and Le Phare. What a great idea! How did you come up with that?
Vojtěch: This is due to the fact that every member of Bran has his own musical roots and plays many styles in other groups. We mix traditional material with folk music, rock and jazz…. But it’s nothing new. Breton music mixed with rock – it’s well-known Stivell in 60’s. And jazz approach to Breton material was tested by Jacques Pellen, e.g.
CJ: Is the title song Le Carnet Noir an original song?
Vojtěch: Yes, it’s our original composition, which I created with our previous singer Dewi Pajot.
CJ: Unfortunately I speak no French and even less Czech. It seems to me that you’re singing in French. Is that right?
Vojtěch: Yes, we use both French and Breton language. It’s necessary if you play old Breton songs. 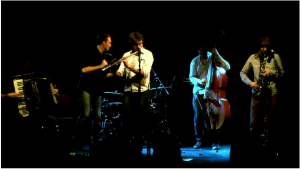 CJ: What other languages do you speak or sing in?
Vojtěch: We play strange song called Ihala written by P.J. Perche and EV. It’s in Finnish.
CJ: Do you plan on singing in Celtic languages too such as Irish, Welsh or Scottish?
Vojtěch: We love Irish music, but we feel like a „Breton” [sic. This is how Eastern Europeans use quotation marks] group. You can say: Why? You are Czech! But we have worked for ten years under the leadership of our front man who came from Brittany. And we play Breton music.
CJ: Will you be coming to play in the United States or Canada? If so, when?
Vojtěch: It’s difficult for us because we have no management in USA and Canada. But we would be very happy to play there, of course. We are looking for an American agency.
CJ: What new music are you working on?
Vojtěch: We would like to maintain the current course that we started on album Le Carnet Noir. We have many new similar songs, and we are slowly preparing next album.
CJ: Do you have advice for musicians who want to learn Celtic music?
Vojtěch: I do not feel that I could advise someone. But I think making music is the same as in any other genre – to learn, to listen to others and especially to play. And do not try to slavishly play just like Irish musicians if you are from Central Europe or elsewhere. Everyone has its own style and approach.
Well, thank you so much Vojtěch, and thank you to Bran for all the great music.