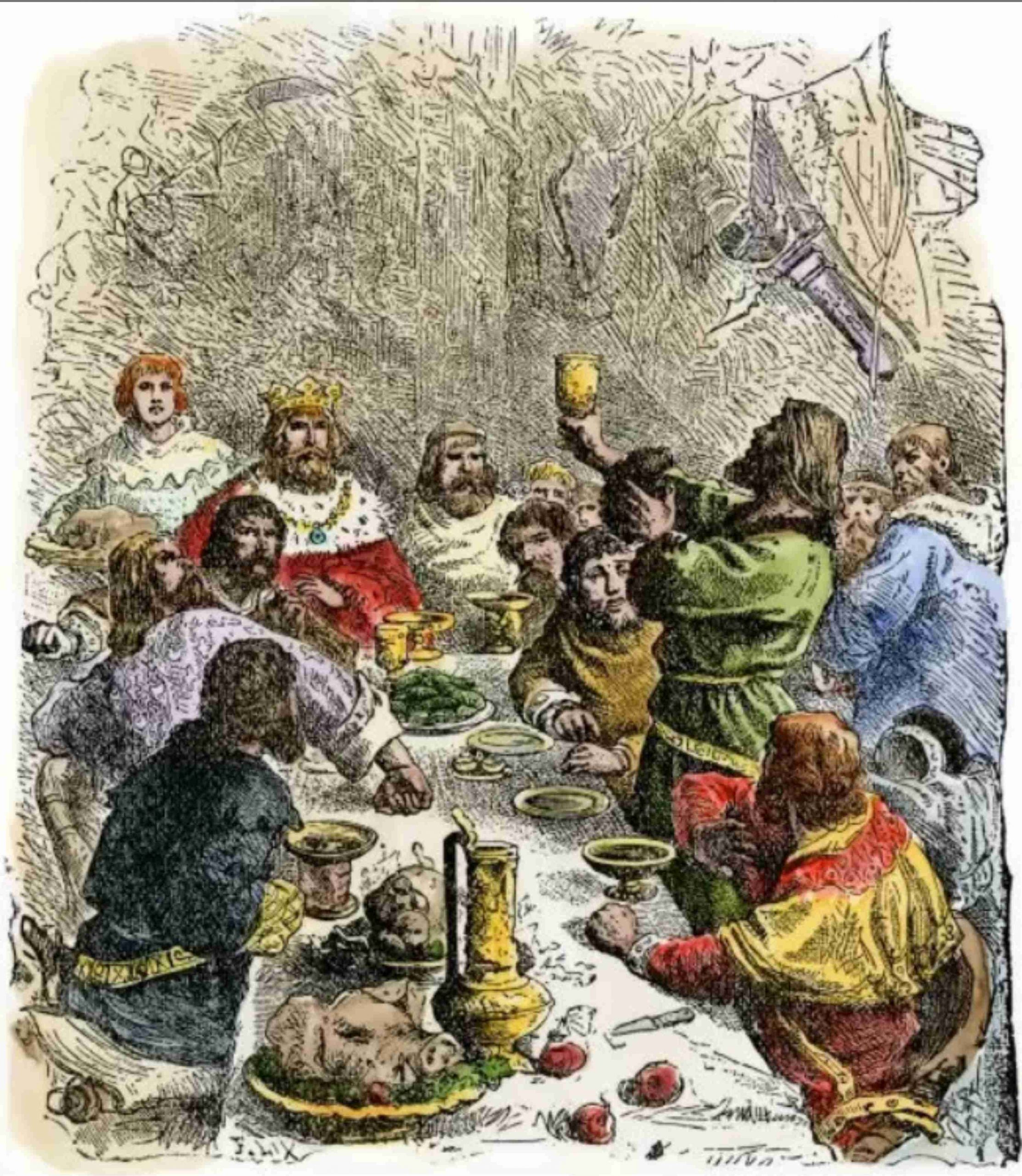 Who doesn’t love a feast?

As a medieval/renaissance enthusiast, some of the best times I have shared were at a banquet. The community seating, the talk and bustle, the entertainment, it’s all such great fun.

The Celts enjoyed their feasts as well as they celebrated Feast Days, weddings, victories, you name it. Feasts gave the clan’s affluent members a chance to show off their finery, thus making their social status abundantly clear. It provided a good excuse to fight over the honor of claiming the best cuts of meat. And once the drinking took hold, there was plenty of laughter, singing and brawling.

The Celts held feasts to toast the construction of a new village or a new defensive fortification. They held feasts to celebrate the seasons, or to honor the ascension of a new Clan Chief. The most famous of these ‘leadership’ feasts was the Feis of Tara (dating from BC to the 6th century AD). This was an assembly of Ireland’s top fellows. While the Feis was a multi-day event held every 3 years to discuss a variety of legal and political topics, there was certainly a good amount of feasting.

At a feast, folks could expect a variety of meats, seasonal fruits, vegetables and cereals – and, of course, alcohol. Since cows were considered a measure of wealth (see the famous Tain Bo Cuailnge – The Cattle Raid of Cooley), some beef was served, but so was pork. However, the Celts had access to other tasty beasts. Evidence shows that poultry and game were likely supplemental dishes. With a handy roasting spit or a handy cooking cauldron, tummies would easily fill up.

Upper-class Celts were fond of wine when they could obtain it from Mediterranean traders. Clans would exchange slaves for Italian amphoras. Lower-class Celts made do with malt beer or mead (fermented honey).
The Celts ate at low tables which rested on beds of hay, where everyone sat. Serving plates were made of bronze, wood or wicker, and all one required for a place setting was a knife. Makes me think of the first time I took friends to Medieval Times. They were looking for the forks, while I just dug in with my hands.

At a feast, the Celts expected to be seated according to their social status. The Greek philosopher, Poseidonius, commented in his Histories in the 1st century BC:

…they sit in a circle with the most influential man in the centre whether he be the greatest in warlike skill, nobility of family or wealth. Beside him sits the host and on either side of them the others in order of distinction. Their shield bearers stand behind them while their spearmen are seated on the opposite side and feast in common like their lords.

This is not so different from a Renaissance Festival where the King and Queen sit at the center of the table with high-ranking lords and ladies fanning out on either side. I always find myself at one end of the side tables, though thankfully not in the ‘kids’ section.

Two types of cauldrons could be found at a feast. 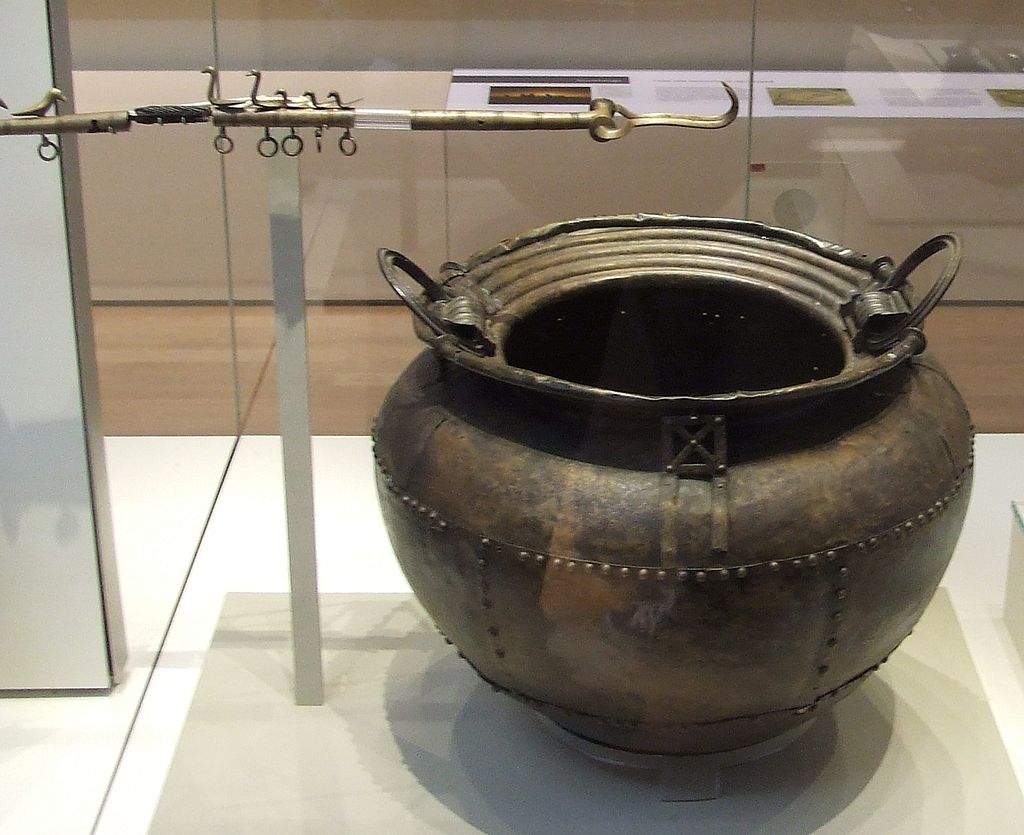 Bronze Age cauldron and flesh-hook made from sheet bronze.

The first is the type we often think of, the communal cooking cauldron. This cauldron would have been made from riveted bronze sheets. The rim would be straightened and fixed with two large rings for attaching chains or ropes. Then the cauldron could be suspended over a fire. Meat was boiled with herbs and vegetables to create stews, and larger pieces of meat would be drawn from the cauldron using flesh hooks.

The Gundestrup Cauldron is composed almost entirely of silver, but there is also a substantial amount of gold for the gilding, tin for the solder and glass for the figures’ eyes. Materials for the vessel may not have been added at the same time, so the cauldron can be considered as the work of artisans over a span of several hundred years.

The other type of cauldron was a decorative piece placed on the table to display the host’s wealth. This cauldron would be made of precious metal and intricately decorated. A lovely example of this type of Celtic cauldron is the Gundestrup Cauldron found in Denmark, which dates to the 1st century BC. It features panels depicting gods, animals and rituals. Imagine the awe feast goers would experience when the Clan Chief trotted out this handsome trinket.

Upper-class Celts drank from decorated horns and goblets crafted in gold or silver, flagons made of bronze (anyone doing The Flagon with the Dragon bit from The Court Jester?). A wonderful example of this type of vessel (…with the Pestle? Anyone?) is the Ardagh Challice, which dates to the 8th century AD.

Lower-class Celts had wooden tankards or simple drinking horns, though folks in the middle-class adorned theirs with bronze. 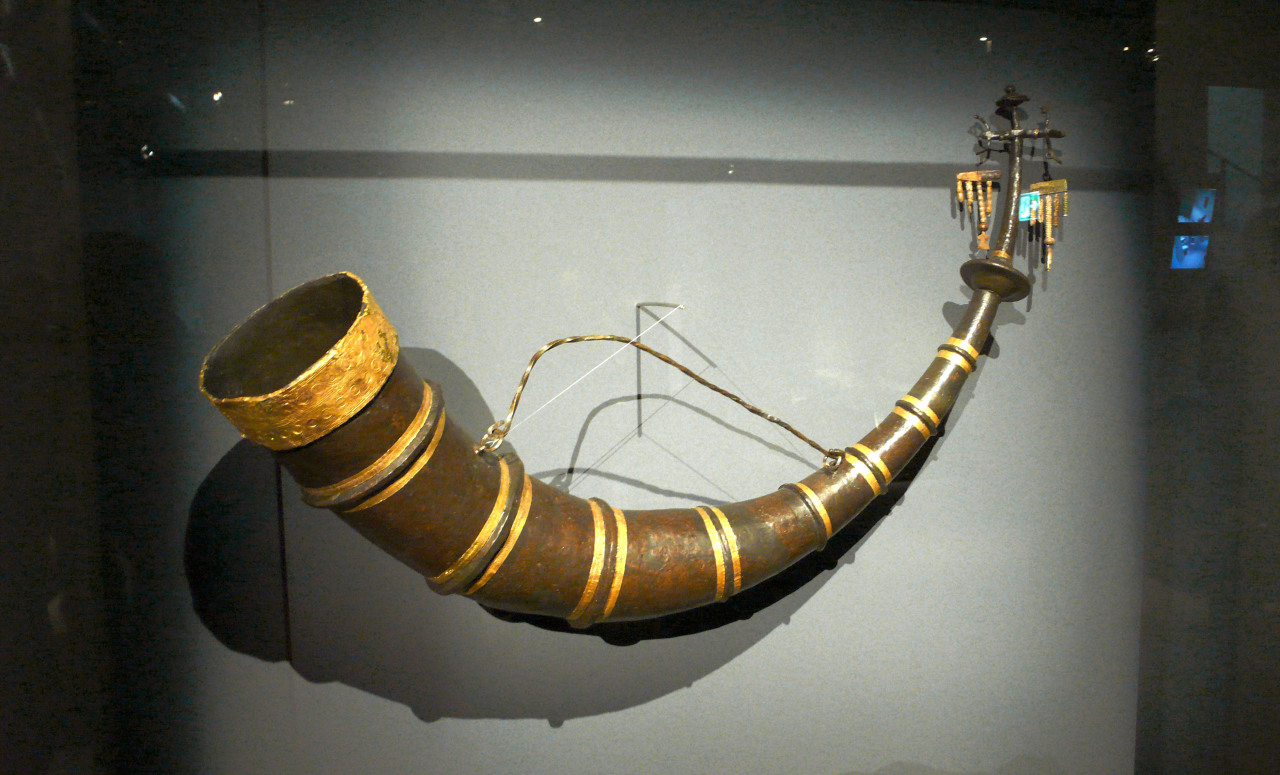 The Celts would trade with the Etruscans and Greeks for all sorts of goods, including feast gear, which was often buried with its owner. The Kleinaspergle burial site in Germany dates to the 5th century BC and has a set of two drinking horns, two wine-mixing vessels, and two small drinking cups. Since sets are intended for more than one person, perhaps the owner was expecting to offer hospitality in the afterlife.
At feasts, the better cuts of meat went to senior guests. The best cut, the thigh, was granted to the feast’s most acclaimed warrior. If another warrior wished to challenge him for the cut, a fight would soon be had. Brawls could also break out over more trivial matters, as Poseidonius describes:

…The Celts sometimes engage in single combat at dinner. Assembling in arms they engage in a mock battle drill and mutual thrust and parry. Sometimes wounds are inflicted, and the irritation caused by this may even lead to the killing of the opponent unless they are held back by their friends. When the hindquarters were served up, the bravest hero took the thigh piece. If another man claimed it, they stood up and fought in single combat to the death.

A stranger who arrived at a feast was always welcomed and offered a seat. No one asked his name or his business until he had eaten. People also exchanged gifts. Indeed, this was an expectation for any leader, and host offered gifts to guests according to their status.
And of course there was entertainment. At a feast, one could enjoy group singing, bardic recitations, poetry, and music. All in all it was a good time to be had, and I prefer to enjoy the romantic notion of a well-done feast.

Etymology
Many historians suggest that the Irish word “fulacht” denotes a cooking pit. In modern Irish, it is one word for a barbecue. “Fiadh” in Old Irish meant something like “wild”, often relating to animals such as deer. However, all acknowledge the difficulties in deriving a genuine etymology for the word “fulacht”. As some historical texts clearly use the term “fulacht” to describe a cooking spit, a close reading of these accounts suggests that the term actually derives from a word meaning support and probably carries a deliberate reference to the Irish words for blood (fuil) and meat (feoil).

Siting
Fulachtaí fiadh are usually found close to water sources such as springs, rivers and streams, or waterlogged ground. They were also sited close to sources of suitable stone where it could be obtained close to the surface. They required a source of fuel, so would have been close to woodland. They would also have to be in proximity to whatever was being processed by boiling in the trough. Once these conditions were met, a fulacht fiadh could be constructed. Once the use of a fulacht fiadh had ended it was common for people to continue to make use of the local landscape, therefore fulachtaí fiadh tend to be found in groups strung out along water courses.

Construction
Fulachtaí fiadh generally consist of three main elements: a mound of stones, a hearth used to heat the stones, and a trough – often lined with wood or stone – which was filled with water and into which the heated stones were placed to warm the water. Troughs may be cut into subsoil or, more rarely, into bedrock. The site may contain the remains of structures such as stone enclosures or even small buildings, and sometimes multiple hearths and additional, smaller pits. They are almost always found near running water, or in marshy areas where a hole dug into the ground would quickly fill with water.

A number of the fulachtaí fiadh pits are approximately a meter wide by 2 meters long and maybe half a meter or more in depth. However, size can vary a great deal from site to site, from rather small pits lined with stones to pools conceivably large enough for people to bathe in.

Function
It is postulated that these pits were filled with water and heated stones thrown in to create a pool of boiling water in which meat was cooked. This is because when excavated, fulachtaí fiadh are found with associated charred, scorched and broken rocks. The Ballyvourney reconstruction also included successful attempts at heating the water and cooking meat in this manner.

Other theories suggest that the sites may have been used for bathing, the washing and dyeing of cloth, and leather working. Supporters of these theories point to the fact that no remains of foodstuffs have been found at the fulacht fiadh sites. Some researchers believe the fulachtaí fiadh were multi-purpose and could have, at least in some cases, been used for all of these activities – cooking, bathing, dyeing, or anything involving hot water. Some fulacht fiadh reconstructions, such as the one at Ballyvourney, include circular, hut-type structures based on the post holes found at the sites; some believe these small buildings were used for the storing and preparation of foodstuffs. Another theory is that the small buildings on site were used for enclosing heat and steam in a manner similar to the Tigh ‘n Alluis Gaelic sweat-houses (which were built of stone), however, this theory does not take into account the fact that the hot water trough is located outside the buildings (when a building is even present at all).

In August 2007 two Galway based archaeologists suggested that fulachtaí fiadh were used primarily for the brewing of beer, and experimented by filling a large wooden trough with water and adding heated stones. Once the water had reached approximately 65 degrees celsius they added barley and after 45 minutes transferred it to separate vessels to ferment, first adding wild plant flavorings and yeast. Some days later they discovered that it had transformed into a drinkable light ale. 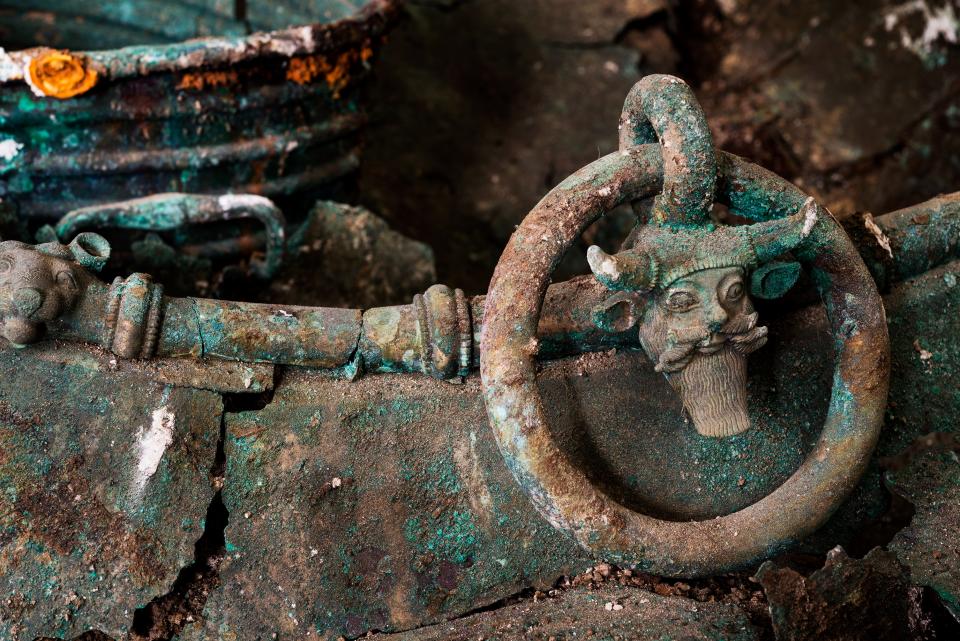 Detail from a 1 meter bronze cauldron from a Celtic burial located in Lavau, Champagne France. Its four circular handles are adorned with heads of Acheloos, the Greek god-river depicted here horned, bearded, with bull ears and a triple mustache.

The edge of the cauldron is also decorated with eight lion heads. The work is Etruscan or Greek.
Inside the cauldron rests an Attic ceramic oenochoe with black figures: Dionysus lying under a vine faces a female figure. It would be a banquet scene, a recurring theme of Greek iconography. The lip and the foot of this jug are set with a gold plate, underlined by a decoration of meanders in filigree.