For as long as I can recall, music has not only given me great joy and escape. It has provided me with great inspiration, both in everyday life and my own creative work. I discovered the sounds of Celtic music a little later in life and was immediately taken in by the beautiful mélange of mysticism and mystery woven throughout. As a Celtic artist myself, I often draw much inspiration from a variety of artists. While it is difficult for me to recommend just one (or even just a few!), I have selected three artists and albums that influenced me as I was growing up – and fairly recently. 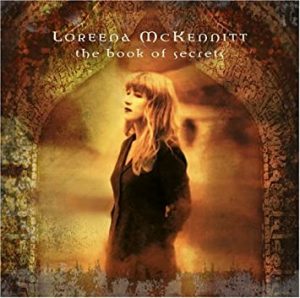 LOREENA MCKENNITT BOOK OF SECRETS – My introduction to this amazing artist and icon in the Celtic and World Music realm was when I heard the song The Mummer’s Dance. Immediately, I was taken by the song. McKennitt’s vocals along with the musical arrangement played on old world instruments. It was a song that took me to a world in the distant past and very much influenced me later on to also do so with my own music and storytelling.
The Mummer’s Dance is only one of many beautiful and magical songs on the Book of Secrets album. Mummer’s Dance drew me in, but the rest of the track list made me stay and begin exploring McKennitt’s other releases.
My personal highlights from the album are Skellig, Night Ride Across the Caucasus, The Highway Man, and Dante’s Prayer.
This was the album that began my own journey to becoming a Celtic artist and storyteller. 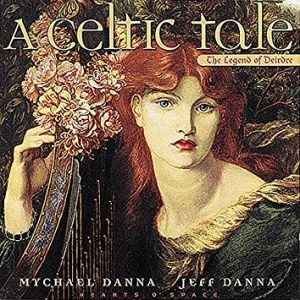 MYCHAEL DANNA AND JEFF DANNA A CELTIC TALE: THE LEGEND OF DEIRDRE – This was an album I heard in a high school music class. We were studying music from around the world and when we got to the British Isles, the instructor had us listen to this particular album. Mychael and Jeff Danna are creators of instrumental soundscapes (their Sirens album is also a beautiful one), much like David Arkenstone.
This album introduced me to the beauty and tragedy that is the story of Deirde and Naois. It inspired me to further delve into Celtic lore and legend, which would later become a great part of how I approach my own work.
This album invokes the mystery shrouding the ancient Celtic world and offers the listener a portal into a time outside of their own. In this, the father-son team have created a haunting soundscape with a variety of old world instruments, including uillean pipes, highland pipes, penny whistles and the Celtic harp. Their instrumentals unfold the story of Deirdre and the Sorrows in a riveting, masterful, and suspenseful way.
I will also add that there are two different versions of this album. One that is purely instrumental, and another that has narration over the instrumental. While I’ve heard both, and the narration is done well, I do prefer the instrumental album. The story is also in the linear notes for those unfamiliar with the legend of Deirdre and the Sorrows. 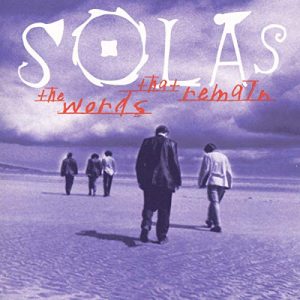 SOLAS THE WORDS THAT REMAIN – I discovered Solas about ten years ago when I was working at a Starbucks. Every so often, I would hear this wonderful, fun, and vibrant Celtic sounding song playing in the store and it got to a point when I had to see what the song was and the artist. It turned out to be the song I Am a Maid that Sleeps in Love by the band Solas. It prompted me to look the band up and check out what else they have to offer.
Now, while Loreena McKennitt and the Dannas tend to invoke more of the old world, Solas is a little more contemporary with some old world woven in. Still, I find them to be quite immersive and entertaining.
One album in particular that I enjoy by them is The Words That Remain, which is the album that I Am a Maid… is on. Karan Casey’s vocals are more on the breathy, sweet, and whimsical side. Almost like a water pixie to Loreena McKennitt’s powerful lady of the lake. The rest of the band compliment Casey’s vocals and other musical highlights on this album for me include The Grey Selchie (love me my water-themed songs!), The Vega Set, and Song of Choice.