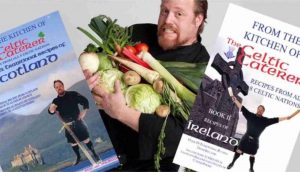 To Say Chef McBride is passionate about Celtic Food and its Culture is a bit of an understatement.  Classically educated in Celtic History and Literature his experiences have taken him across 4 continents and more than 20 countries.  At one point he found himself the Head Maître d’ for Princess Ann’s engagement party.  His unique knowledge of the almost forgotten field of Celtic Cuisine has possessed him to bring these remarkable dishes back into the fold and find their places amongst the dinner tables of the 21st century

What is Celtic Food?

Much of what can be called Celtic Cuisine, comes from the 8 Celtic Nations, (Scotland, Ireland, Wales, Manx, Cornwall, Brittny, Galicia & Asturias). And is divided between that which was fished from the Seas of the Northern and Western climates of Europe, and those products that could be farmed in the very rugged and sometimes mountainous terrain which they now live in.  The vegetables from were primarily root types, for lack of a better word.  These types of vegetables did not need much light but could store large quantities of energy in complex carbohydrates and starches.  Within these 6 books by Chef McBride, are more than 300 traditional recipes enhanced by modern cooking techniques, which reflect the different origins or variations within the 8 Celtic Nations.

As a chef that specializes in Celtic Cuisine, I have been taking the time during this pandemic to write my 7th Celtic Cook book.

The inspiration for me to do the Whisky Cookbook has a number of different reasons.  Off the top, comes from when I do the research on the recipes, some are over several hundreds of years ago, and there is a lot of recipes using whisky, but they do not list what kind.  Then what happens is that too many whisky companies jump in and promoted their whisky, when it was not always the best served.   There were no rules regulating what whisky to use, as the early recipes used whatever whisky was about.

It is from this aspect that many years ago I started to work out the variations of COOKING with Whisky as compared to what many have done with pairing whisky with food.  I have looked at what flavor that a particular whisky can add, vs the potency remaining, when heat is applied.  Irish whiskey as well as some Canadian and Ryes will dissipate when cooked or placed under heat too long.  This makes a dish, where the whisky is irrelevant to the actual flavor of the dish.

Bourbons are a steady factor in use in the US.   The Celts will use bourbons when they have a dish with many different flavors competing and don’t want it to overpower everything else.   Some simpler recipes will find a Blended Scotch works best, as you get the bold flavor you need without changing the chemical balance of the dish by having too much liquid in the mix.  The Islands or Islay Whisky’s are very nice, but these peated whiskies can destroy a dish like a Orange Chocolate Whisky mousse but be perfect for a Smoked Salmon whisky cheese soup. So, my new cookbook looks at all these factors, as well as explaining a graph in a bell curve as to which whiskies are best for which dish.

One of the most intriguing discoveries was the use of Whisky in the southern most Celtic Nations of Galicia.  In the southern region, close to the Portuguese border, whisky usage in cooking is quite the norm.  The evolution of this came from Scotch makers traveling to the areas to buy Sherry and Port casks to age their whiskies.  What the Galicians took back was the usage of whisky as an alternative for some recipes.  They have found that it worked great with olives and instead of wine for some Sevilla style dishes.

Like all my cookbooks, it will be filled with many different Historical attributes of the Celts, the Evolution of the making of whisky, excerpts of various Celtic poetry, and cooking methods for ageing steaks and curing salmon with whisky.

Look for the Whisky Cookbook this November.