Craic In The Stone

Since breaking into the Irish music scene in 2013, Craic in the Stone quickly became the hottest band of their genre in Southern California – selling out local venues with their die-hard fans, better known as “Craic-Heads.”

Now, after more than a year off due to the pandemic – Craic (pronounced crack) is back and happy to be playing live once again! Janelle Viones’ driving vocals are powerfully expressive, and Chris Caputo brings a perfect blend to their magical harmonies. Matt Brislawn makes his violin sing and wail alongside the rocking guitar work of Jay Rofsky. Riding the rhythm are Scotty McKay on percussion and Bill Strongin laying down some tasty bass.

Just released, Craic is the Stone’s fourth CD – PUB TUNES was recorded at Wellandia Studios and features traditional Irish and Scottish songs like: “Dicey Reilly” and “Donald Where’s your Troosers,” plus several originals in a similar vein like “We Drink When We’re Dry” and a fitting tribute to their favorite ale, “It’s Guinness.”

A fun music video was filmed at Muldoon’s Pub a while back and is available on YouTube. But a big surprise comes right at track one with “Bron-Y-Aur Stomp,” a Led Zeppelin classic that takes on a Celtic-Rock sound, and stand by for the party-ready version of the Proclaimers’ “I’m Gonna Be (500 Miles).”

Reflecting the challenges we’ve all endured this past year is “I Will Not Be Broken.” Penned by Nashville singer/songwriter and great friend, Mare Wakefield, this powerful ballad has become an instant classic. 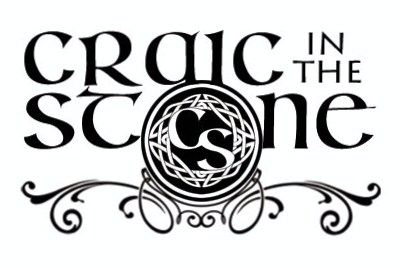