While roaming the aisles of the 2021 World Science Fiction and Fantasy Convention in Washington DC, I came across the Scroll Saw Puzzles crafted by Judy Peterson of FanTaminals. Judy was kind enough to sit for an interview, and I am pleased to bring you her story.

In 1989, Judy and her husband Dave moved from Green Bay, Wisconsin to Madison. Judy did not know the town or the folks, so as she began to explore, she went to a local art show. There she saw two women selling wooden scroll saw puzzles. Judy didn’t know what a scroll saw was, but she loved the puzzles so much that she decided to find out. She bought her first scroll saw the next February, and she was soon off on a journey of discovery.

Judy’s first puzzle was a 3-piece rabbit. At the time, Judy was working a seasonal job at a “cheese and sausage” company, and she brought the rabbit into the office to show her co-workers. They loved the piece, and began asking her to create custom pieces as gifts for the upcoming holidays. 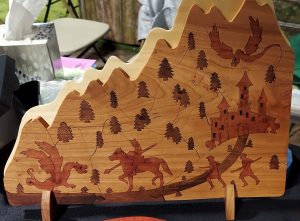 The most-requested item was the Creche Scene from a book published by Better Homes & Gardens. Judy went to the local library and found the book. She made copies of the pattern and decided, “Yep, I can do this.” The co-workers loved the Creche, and she sold a dozen before her seasonal job ended.

After that, Judy started buying lumber, much in the same way other crafters buy fabric, or yarn, or beads. “Honey,” she would say to Dave. “I just bought $40 of lumber today.” She began spending a lot of time at a lot of sawmills, and it wasn’t long thereafter that Judy decided to start a crafting business to justify her ‘habit’. (Honestly, fellow crafters, haven’t we all been there at some point?)

Scroll saw crafting became Judy’s mid-life career change. She got her first seller’s permit in 1990, and did her first show just before Christmas that year.

Judy attended WisCon the following March and had a great time. Fans loved her work, so WisCon became an anchor on her yearly schedule until she and Dave eventually moved away from Madison. Judy also started doing “mall shows”, where local crafters were invited to set up tables and display their wares. She started taking professional photos of her work, and was soon accepted to larger shows, such as artisan street festivals in downtown Chicago.

Then Judy started traveling. Her mother lived in Arizona at the time, and while she found a few shows in the area Judy discovered that the shows in Albuquerque were much better. So Judy concentrated on selling in New Mexico and then stopping by Arizona to visit family.

Judy attended her first WorldCon in 1998, and has attended all US WorldCons since (or NASFIC when WorldCon was abroad). The only exception was MidAmericaCon (Worldcon 2016) in Kansas City, Missouri because some thief stole her trailer with all her stock and display shelves! 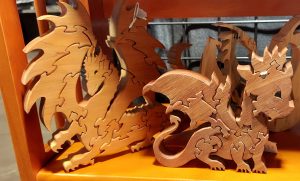 Judy traveled by herself for several years, but since Dave had accrued many vacation days at work, the two got into a smooth rhythm of picking Dave up on a Tuesday, traveling on Wednesday-Thursday, selling at a show on Friday through Sunday, and then returning home so Dave could get back to work the following Tuesday. Whew!

COVID shut down all shows in 2020 and most in 2021. However, Judy and Dave had already retired and were keeping a part-time show schedule. Judy also had royalty income from her books. Back when Judy started crafting in 1998, she ordered a book of scroll saw patterns. However, the book was late in coming, and so Judy contacted the publisher. The publisher was looking for scroll saw artisans who created their own patterns, which Judy did.

Judy stopped by the publisher’s office (on the way to a show, of course) and exhibited some of her scroll saw patterns and the finished wooden puzzles. The publisher purchased her patterns on the spot, which lead to a series of 6 books. The 5 still in print are: 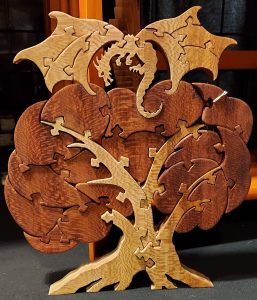 Judy also writes articles for scroll saw magazines, averaging 3-4 per year. She now attends indoor shows (no wind, and no need to set up tables). Some shows have inspired her to create specialty puzzles. One in particular were the Liaden Universe books by Sharon Lee and Steve Miller. Judy met them at a con, and spent time chatting. The Liaden books were also recommended to Judy by Anne McCaffrey, and Judy loved anything “Annie” recommended. On the back of one of the Laiden books was a tree, which was a character in the book, and a dragon above the tree. This visual spurred Judy to create her Tree and Dragon, one of which was sent to Anne as a thank you gift. 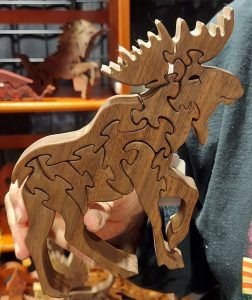 Another of Judy’s favorite pieces is her Moose, simply because it looks the way a moose oughta look. All the pieces fit well, and their ‘keys’ keep each piece in place. Interestingly, one of the pieces which confounds Judy is her Elk, largely because the antlers are so difficult to cut.

Judy always watches the way customers interact with her work. One thing she observes is how people are attracted to specific species of wood. For example, a “cherry” person will pick up all the cherry pieces, but not the walnut. Judy finds it interesting that people do not realize they are doing this until she points it out. Judy also notes that a Moose made of walnut will sell, but a Moose made of cherry will not. Conversely, an Elk made of cherry will sell, but not an Elk made of walnut. And – not surprisingly – all red-wood dragons sell first.

Judy takes orders for custom pieces, which range in price from $35 up. She doesn’t sell on Etsy because other crafters who have purchased her pattern books also sell on Etsy, and their quality isn’t always the best. Judy’s is. While sanding each piece is time-consuming, especially for wooden puzzles with lots of intricate edges, Judy knows that sanding is important. All quality pieces are well-sanded, and Judy’s quality speaks for itself. At the end of the day, Judy wants people to think one thing about her work, “She did it well.” 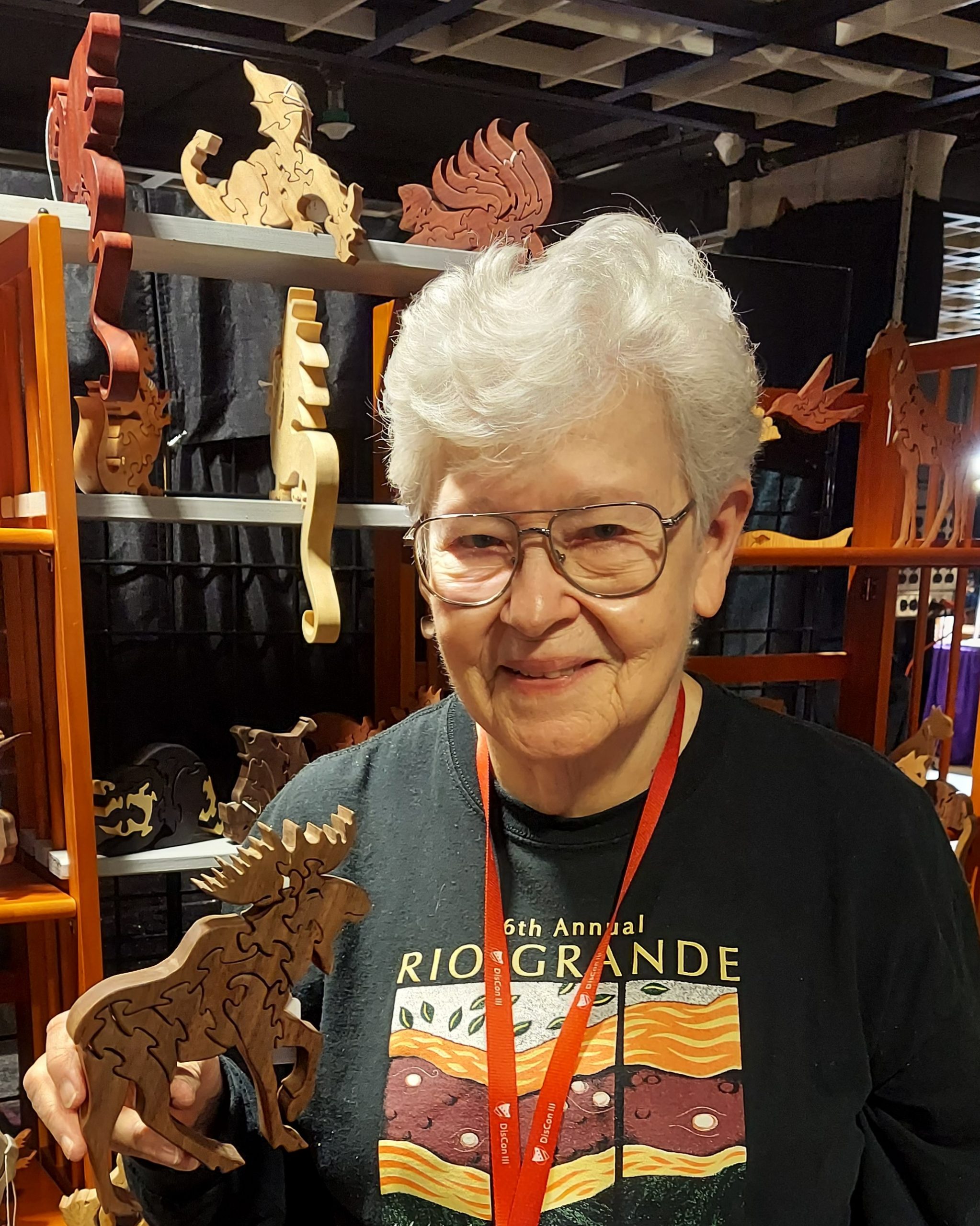 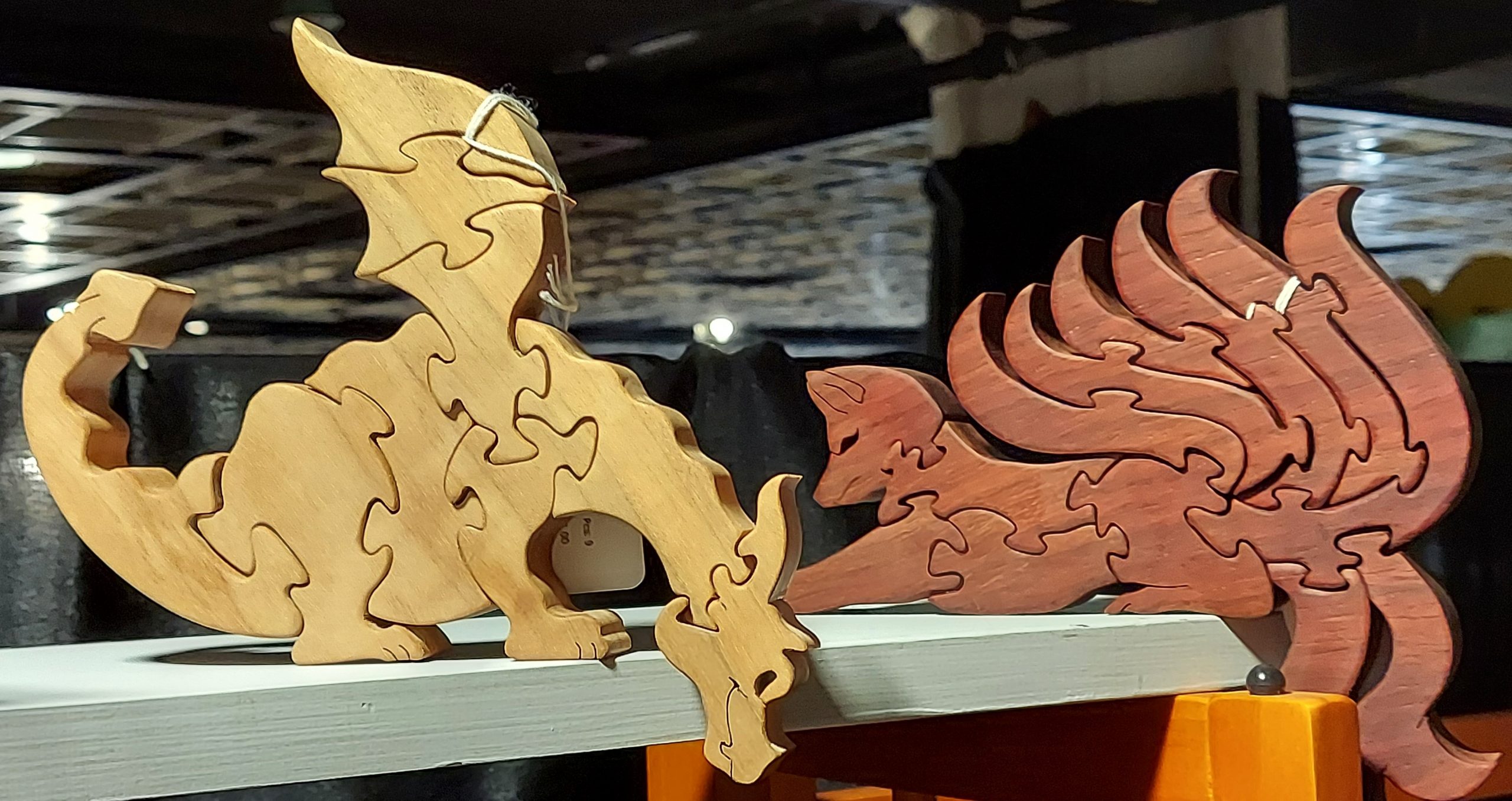 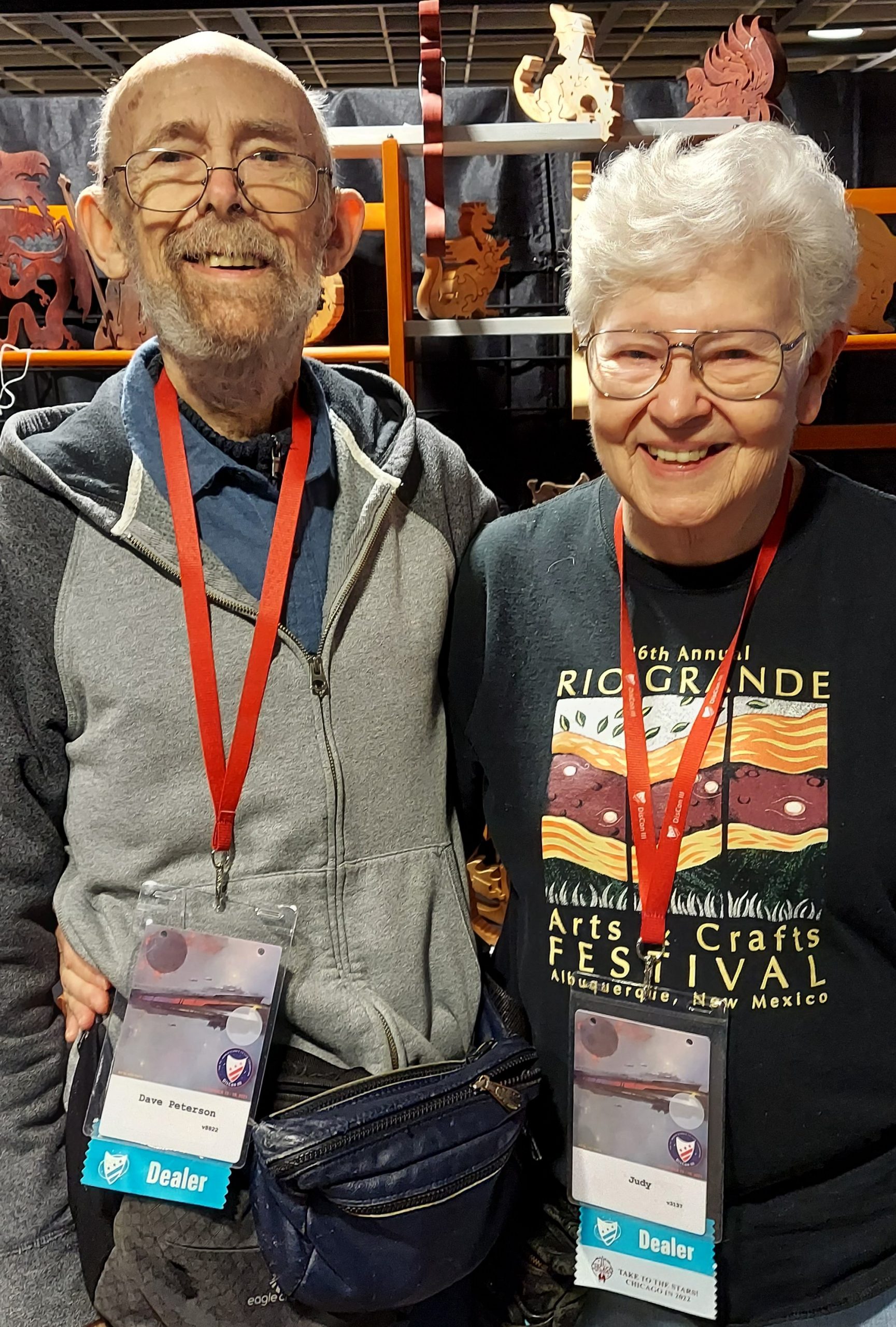 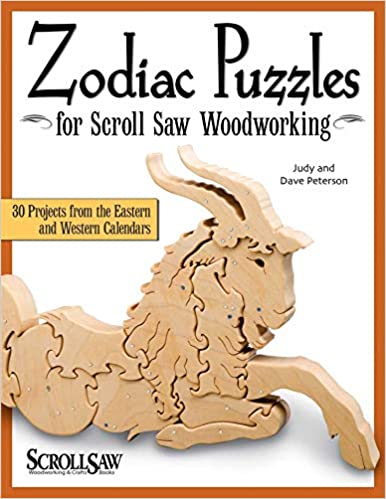 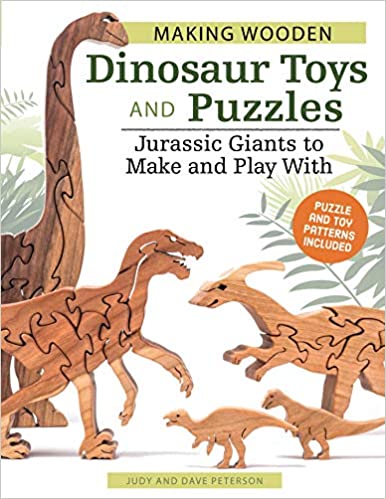 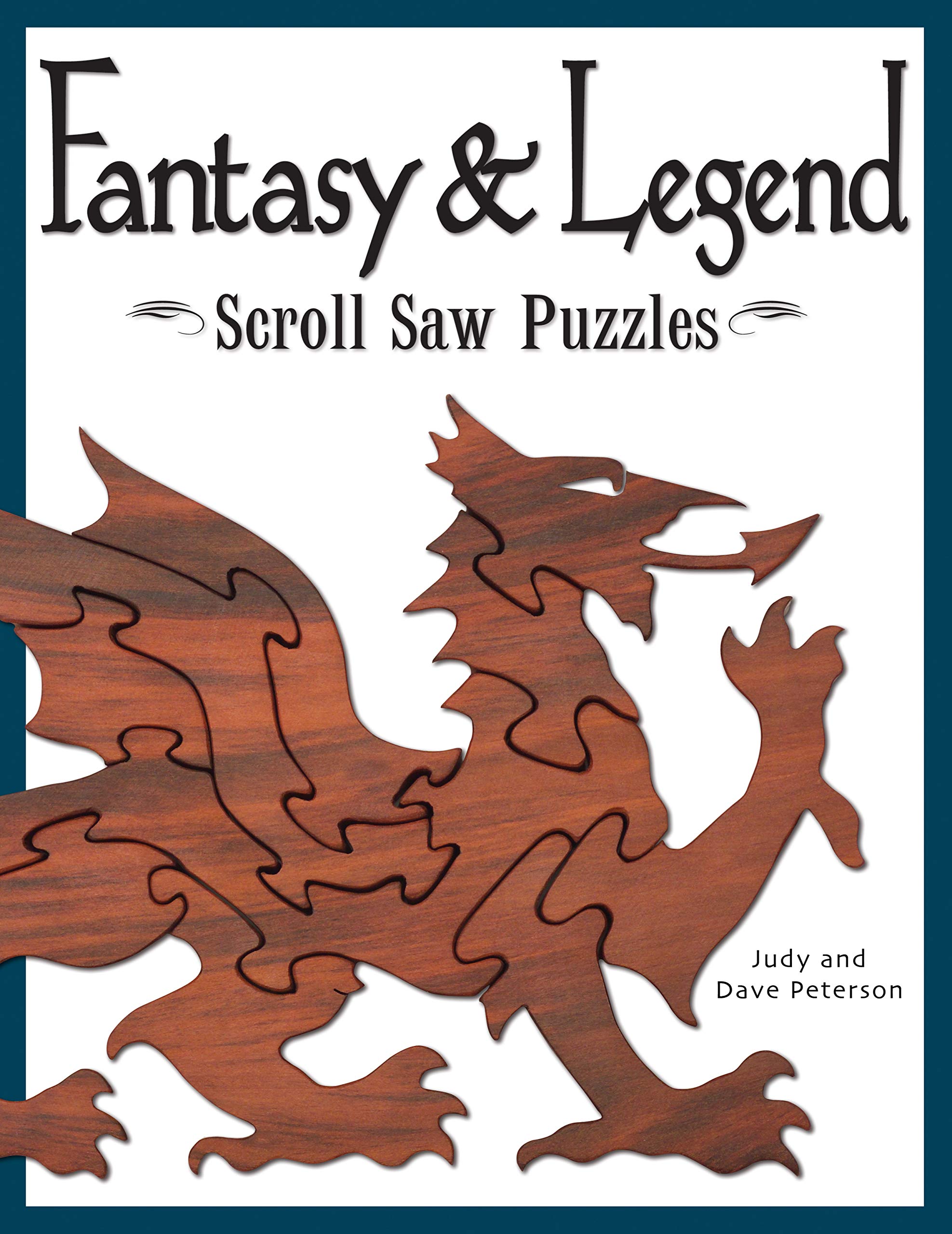 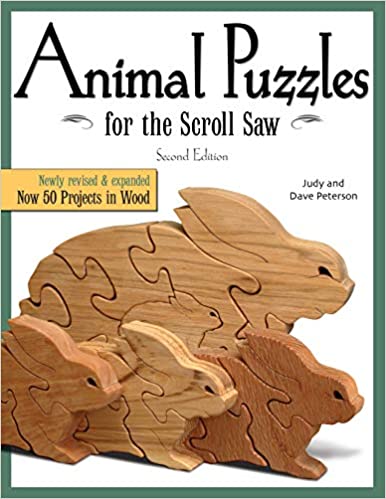 Animal Puzzles for the Scroll Saw 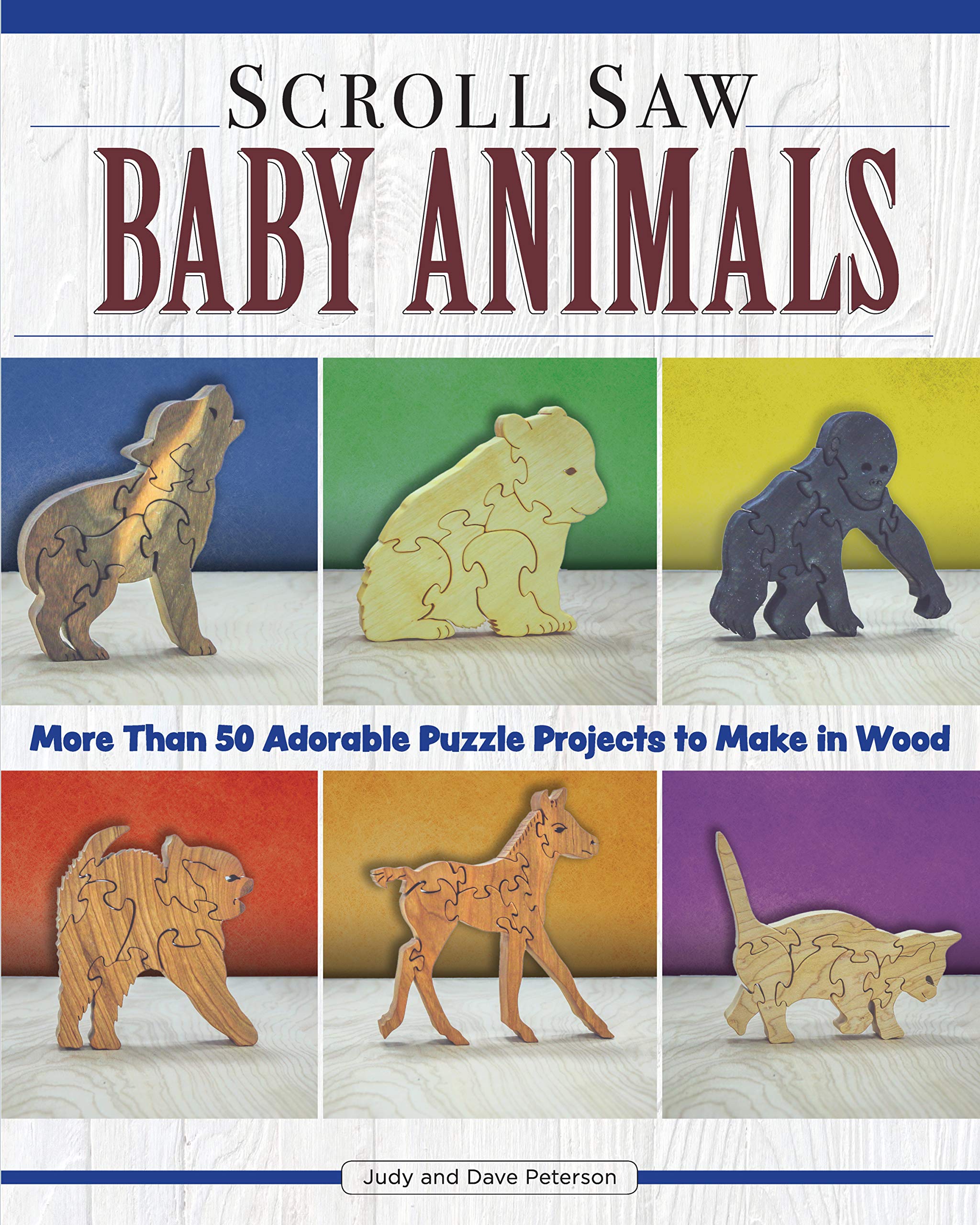