KING ARTHUR AND THE OTHERWORLD

King Arthur and the Otherworld: Missteps in Fairy Etiquette, The real reason for the tragedy of the tale? by Arian Niwl

First off, just what is the Otherworld?
For those who are not familiar, the Otherworld, as related in Welsh tales, is referred to as Annwn. It is described as a place connected to our world, and yet it is a very different realm. The place, according to the Bard Taliesin, is beyound suffering, death, and sickness. The inhabitants are described as being unearthly beautiful and possessing various magical attributes. In other literature, the beings of this world are called by various names, but they are basically what in Wales are the Y Tylwyth Teg or “the Fair Family”, which is a euphemism for Fay Folk.
Turning back to the many tales of Arthur, most of these deal with quests into the Otherworld. We find such accounts in the Black Book of Carmathen, Culhwch and Olwen, and in variations of the Triads. It is also noted that many of Arthur’s knights are also beings of, or have ties to, the Otherworld.
There has been much Otherworld folklore that has grown up in the Celtic lands, especially the Insular Celtic nations, but this folklore also extends much further afield. Indeed all over the world, magical beings who are not gods, but instead look like humans, exist. They think a bit differently and follow a different set of moral values, but universally these beings can be easily offended by a misstep in etiquette – and the result is often ill-fortune, madness, and/or death.
Indeed, there are plenty of tales where people have either directly or inadvertently given offense when dealing with these beings, and thus the terms “Fair Folk”, “Good Folk”, “Fair Family”, and more have come into being, for it is said that the term “fairy” is diminishing and dismissive to them.
That being said, let us turn back to some of the Arthurian tales, starting with Arthur and his family connections. Arthur was born from the deception of Lady Igraine by Merlin, who disguised Uther Pendragon as her husband. I wonder if there was an ulterior motive behind Merlin’s actions, which is speculation on my part, for there is probably little doubt that Uther had fathered several other children, and thus there would be other claimants to the throne.
Further, it is interesting that two of Arthur’s older half-siblings are Morgana and Morgause. The former eventually became known with the appellation of “Le Fay”, which is derived from French term meaning “the Fairy”. Further, the names for both Morgana and Morgause are a derivation of Mari- or Mori-gena, which is a type of fairy sea spirit found near sea caverns. Thus Igraine had named at least two of her three daughters after these sea-fairies. 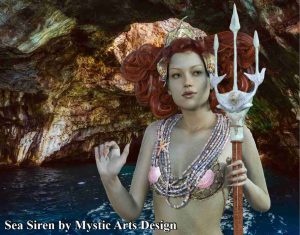 One wonders why she did this, but sadly there are few tales that survive of Igraine’s origins. Mostly, she just enters the tales as the Duke of Cornwall’s wife. One speculation is that the Duke met her and married her, thus passing onto their children part of her Fay blood. 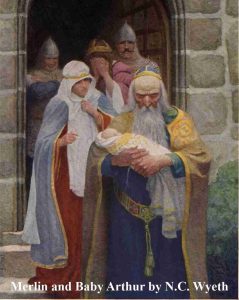 It is well known in the tales of the Fay that children of fairies and humans sometimes take after the human side, but sometimes they take after the fairy side. Perhaps then, Merlin knew this and thus by producing a male claimant to Uther’s throne by Igraine, he also knew that Arthur would carry both royal blood and Fay blood, and be able to accomplish more than mere mortal men.
Given this, the tale of the Sword in the Stone makes more sense because Merlin knew that only a man with Royal blood and Fay blood would be able to break the enchantment. However, by deceiving Igraine, Merlin engaged in a falsehood against the Fay Folk, and that is a grave misstep. If one recalls, Merlin pays dearly at the hands of the Lady of the Lake, and do we see a water connection here?
But we are not quite done with the Arthurian connections to the Otherworld. There is Guinevere, whose name is more or less a French form of the Welsh Gwynhwyfar, which means “white phantom”. In Welsh Gwyn means “white”, and the root form of the proto-Celtic word “windos” means “white or fair”. The second part of her name is given in translation from sources as “phantom”. However, when digging deeper it appears the later part of Guinevere’s name has older Celtic roots going into the root word “sebros” or “sēbarā”, which according to literature means “magical being”.
Now this is interesting because there seems to be some confusion as to Guinevere’s origin. Indeed, she appears to have three different fathers depending on which tale you read. Eventually, Geoffrey of Monmouth ends up just saying she is “of Roman descent”.
The Triads mention Guinevere as the daughter of Cywyd of Gwent, or Gwythyr ap Greidawl or Gogran Gawr. Gwythryr ap Greidawl, is interesting because a king of Annwn is his rival. Gogran the Giant, Gawr in Welsh, is also mentioned as a being of Annwn.
Now etymologically cognate with Gwenhwyfar is Findabair or Finnabair, which also means “white” and either “phantom or ghost”, and is likewise a term used for Fay by coming from the root sēbarā. Thus, perhaps Guinevere’s true origin lies within her name, and she is really “a being of fairy”. 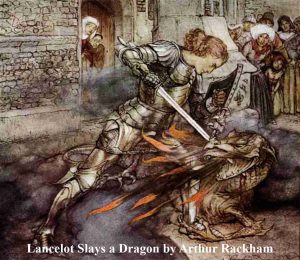 And let’s not forget that Arthur was seduced by Morgause, which again adds to a depiction of “a being of fairy”.
Finally, when mentioning Guinevere one cannot but help associate her with one other pivotal Arthurian character, Lancelot.
This is the knight with whom Guinevere had an affair, and it is important to note that Lancelot is the shortened form of his full name which is Lancelot du Lac, or Lancelot of the Lake.
Tales and history place Lancelot as being raised by none other than the Lady of the Lake, hence the appellation “du Lac”. And yes, this is the same Lady of the Lake (or in the original Welsh Arglwyddes y Llyn, who has also been called Nimue or in some versions Viviane) who eventually seduces Merlin.
Also in the tale, the Lady of the Lake is the Fay who gives Arthur Excalibur. Arthur receives both the sword and the scabbard (which turns out to be the greater treasure). He marvels over the sword, but then he just departs. There is no mention of him either directly appreciating the gift or giving something in return.
This is a very big misstep in Fay etiquette, for one never accepts a gift from the Fair Folk without some trepidation. A gift from a Fay is never simply “given”. Rather, it is an implied debt. At the very least, one should acknowledge the gift – and never say “thank you”, for an expression of thanks is also a debt to the Fay and one does not want to be in debt to the Fay. This is precisely the reason why anyone receiving a Fay gift should return the gesture with a complementing gift. 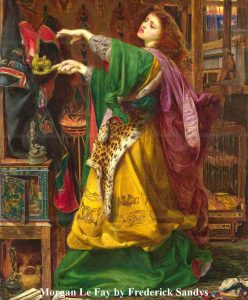 It seems interesting that with Arthur having snubbed the Fay, the Lady of the Lake would then raise the child Lancelot as revenge, which complimented her plan to rid the world of Merlin.
Finally, there is one other tidbit of information. It is said in the tales that the ruler of Avalon is a Mari-Morgena. Indeed, this might actually be Morgan Le Fay carrying on as Mari-Morgena, for it is this same Morgan, Arthur’s sister, who takes a mortally wounded Arthur off to Avalon.
In summary, there is no doubt that Arthur had connections to the Otherworld, the land of Fay Folk, and may have carried his own strain of blood Fay blood. His wife may have been “a being of fairy”, his right-hand knight may have been raised by a Fay, and we all know his sword came from a Fay.
In almost all the folklore, getting involved with a being from the Otherworld results in some sort of tragedy or loss due to a misstep, and there were plenty of those in the Arthurian tales. This, then, might explain what eventually happens. There is magic and beauty, but eventually there is the loss of that magic and the ruin of that beauty with the fall of the Camelot and the Round Table.
Even so, perhaps a bit of the magic still lingers, and this is why after a millennia or more that the Arthurian tales still spark the imagination, and show little sign of disappearing.