Lady of the Dark Horses 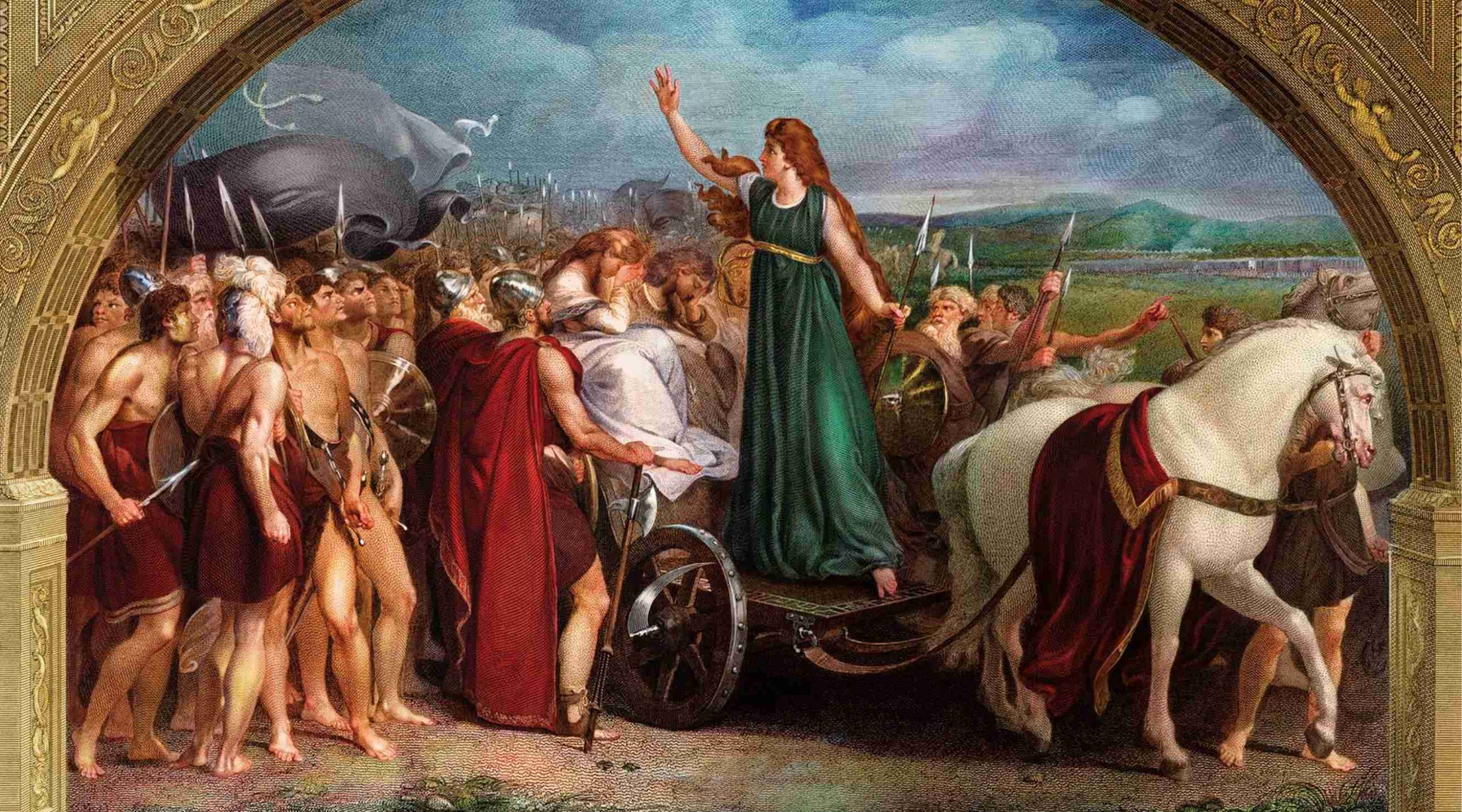 “‘We the Celts of this isle, are used to women commanders in war,’”she cried. ‘I am descended from mighty men! But I am not fighting for my kingdom and wealth now. I am fighting as an ordinary person for my lost freedom, my bruised body, and my outraged daughters. Consider how many of you are fighting—and why! Then you will win this battle or perish. That is what I, a woman, plan to do! Let the men live in slavery if they will.’”
Tacitus, Annals (XIV.35)

Great stories are not supposed to begin with endings, but I was never truly meant to be a bard. And yet this was my final duty to my Queen. The Romans had made every effort to ensure that what had happened would be a song forever unsung. They vowed to sever the tongues and fingers of any bard who dared tell the story. Yet I am beyond their reach now, and so I un-dust my harp.
I am Amergin, charioteer to High Queen Boudicca of the Iceni, and I recall now how the day of battle dawned in fiery crimson hues. The sky seemed alight from the flames of some resplendent pyre, like the vision of a mad artist who paints in wild red.
The carnyx brayed, heralding her coming.
“Make way for the High Queen!” they bellowed. The shouts relayed throughout the mass of warriors, and they responded like a great parting of a tempestuous sea.
I drove her chariot, drawn by majestic dark horses, through the ranks of our great Celtic army. The stallions responded, as did I, to the resounding cheers and chants of her name.
When her smiths had asked her what she wished them to craft for the battle soon to be joined, she only said, “Make them fear me.”
And they did, applying all their skill to forge the poetry of her legend into objects of shimmering steel. They had inscribed ornate scenes of battles and hunts on the varnished surfaces of her chariot. They had wrought Celtic knots and spirals so painstakingly into her armour that, in the crimson dawn, each line appeared to be the pulsing vein of a heart pierced by a sacrificial dagger. They had constellated her shield with rare gems, as though crafting a celestial star map.
Boudicca was beautiful and terrible to behold, both dream and nightmare. Our warriors whispered that she was the living incarnation of the Morrigan, the feared and worshipped Goddess of Death and War. When she stepped down from her chariot, she seemed to have stepped down from the fiery depths of the sun itself, radiant and resplendent.
“Hail Boudicca!” they cried out in a raptured choir, drumming the hilts of their swords on oblong shields. The throaty bray of the carnyx heralded her arrival, but it cringingly attacked my soul for the percussion was as jarring to me as it was to the stallions.
Boudicca was flanked by armour-clad Hibernian war hounds that strained on the chains of their handlers. Behind her stood her great Celtic army, in rank after rank. Those who stood in an honoured place at the vanguard were great brawny warriors, women and men, whose hair was spiked to resemble the spurs of a boar. Their faces were dyed blue in serpentine patterns, like eels ready to swim in the blood of their enemies. They bore no shields but rather carried swords with human-shaped hilts. Piles of heads lay at their feet to be tallied for prestige, and they each eyed their rivals’ count with restless envy.

She bared her teeth, and then suddenly became alert in lycanthropic fury as if seeing the Romans for the first time.
She became a force of nature as wild as the winter storms that swept the lands and froze lost men to death where they stood.

I drew rein for her for one last time.
At the lakeside, she shrugged off my assistance, for she held frailty in contempt, and dismounted.
She stood looking out on the sacred waters, the sun mirrored on their surface.

The flank of Boudicca’s chariot became riddled with arrows that quivered upon impact. We hurried past the Roman’s lightning-emblazoned crimson shields, racing the gauntlet. Roman knights rode toward us, their helms like sliver-masked executioners, their swords drawn. An accomplished huntress adept at bringing down stags and boars in the greenwood while evading antlers and tusks, Boudicca cast her spears at them powerfully, catching one in the chest and throwing him backwards, blood spraying from his mouth.
Her hounds kept pace with our chariot, loyal beasts which, in a last act to save their mistress, brought down two horsemen before they could slay her. Their jaws frothed red as they mauled Roman flesh. Then I heard them yelp, and I knew they were gone.
I pulled at the horse’s reins, but Boudicca was no longer with me. I glanced aside and saw her standing alone like a cornered lioness. Romans raced in to claim her head, and the royal bounty that no doubt came with it. Like a desperate gambler’s throw, I made my move. It was almost certain to shatter the chariot and drag me behind the bolting horses, but I wagered my life to save hers.
Whispering a prayer to the gods, I urged the horses on faster, their flanks heaving their mouths frothing. I steered toward a rise in the terrain, waited for the right wheel to elevate, and then wrapped my hands and arms about the reins and wrenched them sharply to the left. The horses veered and the chariot tilted, threatening to capsize at any moment. I saw the green earth rush by ever closer to my cheek, but then twisted my hips to set my balance, and when my perspective changed, I locked eyes on Boudicca standing only a short distance before me.
I pulled on the reins again and righted myself. The chariot tilted back into position, and I felt the wheels fall back into place, jolting me as it landed. I cried out euphorically, smiling into the sonorous rush of wind sweeping my hair as my helmet fell off as I urged the horses toward her.
Boudicca stood impassively before her would-be assassins, her features set, statuesque and as oblivious as a Goddess of War is to the steel and the howling carnage about her. If the Romans expected a yielded sword or a cowering woman, they had chosen the wrong enemy. She was covered in gore like a lioness guarding her last kill. She held the head of a slain Roman by the hair before casting it at their feet. It rolled to them, looking up in an expression of final shock.
A lowborn soldier stepped forward to claim her, but I roared in like the chariot of Hades, and drove over him, sickened and yet satisfied at the sound of the bladed wheels lacerating his flesh. I tasted the coppery tang of his blood as it splattered my face.
“Come, My Lady. Take my hand,” I urged.
She did, but as I pulled her into the chariot, I could see that she was wounded. I feared mortally, for I saw spreading dark stains beneath the fabric of her royal cloak. I fought back tears harder than I had any human enemy.
“Drive me to yonder lake,” she bade me.
I drew rein for her for one last time. At the lakeside, she shrugged off my assistance, for she held frailty in contempt, and dismounted. She stood looking out on the sacred waters, the sun mirrored on their surface. Her eyes were blinded by light and tears. She seemed lost, oblivious to time, ageless as the hills.
“Go,” she bade me.
“I won’t leave you, my Queen,” I vowed.
“As your Queen I command… No, as your friend I ask you. Tell all what has happened here before the Roman scribes do.”
I could see her intent, and I wished to join her. I prepared to sever the horses’ reins and bolt them, for I could not bear to think of them butchered by Roman blades, but Boudicca staid my hand.
“I have not released you from my service, charioteer. I saw the way you looked at my daughter.”
“Forgive me, my Queen,” I beseeched.
“If you do not go now and save them, I never will forgive you. This is the last command of your Queen.”
I clasped my fist to my heart in salute, but then Boudicca said more tenderly, “Amergin, you have to let me go. Save my daughters, sing my story, and I will hold your service fulfilled.”
The Romans never found Boudicca. They never took her alive nor found her dead. They never paraded her in chains through their streets or vanquished the cherished dream among her people that she would return one day to drive the Romans into the sea.
She turned away from my sad eyes. Head held high, she strode unwaveringly into the lake, her hair and garments rising as she waded into the depths. Her armour bore her down until she was immersed below the dark surface, like a flame enduring through water, till I saw the last of her.