Want to sharpen those sword skills? Then look up your local historical group! Just like Medieval Crusaders, Mercenaries and Artisans Inc. on the Sunshine Coast, Australia.

Founded by Micheal Geppert in 2020. The like-minded individuals with medieval hearts, portray the 900-1500AD era and specific events in the 1050-1150 time period.

The sword training starts at age 13 and up by the specialised teachers in the group. The highly dedicated clan meet weekly, at public centres and nature spaces, where they can really let their hair down!

The idea is new and unique to this area, as in the past you had to travel further a field to enjoy medieval delights! The sub-tropical weather doesn’t deter the passionate re-enacters from suiting up in safety gear, armour or chainmail. So step into another world and find your tribe!

(Schools are welcome to get in touch, new members and interested people come along and see what it’s all about).

BE INSPIRED, MEET SOME OF THE MEMBERS… 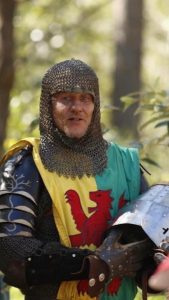 Michael Geppert (founder of the group)
“I am Sir Horath Covington of Essex and am portraying Sir William Marshal’s bodyguard/head advisor, which allows me to wear his colours into battle. I was knighted at a ceremony in April 2021, so I am a fairly new knight. I have been involved with reenactments and sword work for over 20 years now. I enjoy doing this, making and creating different outfits and kits. There is no other place you can get this uplifting feeling from. Great fun, great people. I am also reenacting a Crusader knight from the period of 1050-1150 AD, based on the crusade of Norwegian King Sigurd I Magnusson, the Saviour of Acre”. 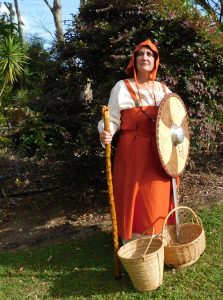 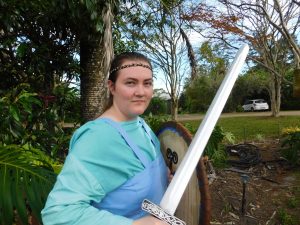 Lynette and Taryn Audsley
“Reenactment is a life-long interest we both had. We go to the Abbey every year. We saw MCMA advertised in the paper and went just for a look. Once we started going it was like finding ourselves. Taryn loves the sword fighting and Lynette loves learning how things were made and what food was like and just daily life”.
A Tale of two traveler’s
Gertrude is a Viking volva (witch/seeress) who is well known for the practices of the ancient arts and her love of cats, especially her spirit animal a Norwegian forest cat. Gertrude is an elder woman of her village Henbarian. She is renowned for her many skills and is revered as a very magical person. She loves all pretty and shines objects and sells her potions and fortunes for trinkets and baubles that she can display proudly. The light of her life her beloved daughter Alva. Alva a young maiden and daughter of the village witch is heart broken when her love left the village to prove himself in battle and has not returned. She leaves the village and goes in search of him determined to find him and bring him home safely. Armed with the shield that was gifted to her on his departure painted with his symbol a wolf, and of course her mother Gertrude who insisted on coming to protect her with her life. They meet up with a ragtag group of traveler’s from all corners of the world, who all have quests of their own. Though Gertrude has no love for these people who practice a strange religion she knows that they can keep Alva safe during her quest to find her love. Training her in the art of combat and with the knowledge of the strange worlds they are travelling through. 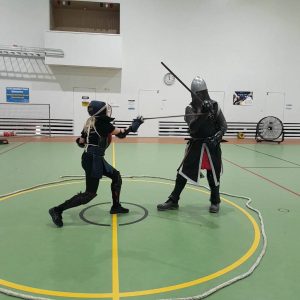 Karuna Davis (left above)
“Sword fighting makes me feel empowered, I love the thrill of it. It gives me the chance to get to know a side of me that I would never have encountered in normal everyday life. My fellow sword fighters are incredibly encouraging and supportive. Reenactment lets you be part of another world, you get to be a character from a completely different time. The Viking Age is what got me into it initially but I’m learning so much about history since I joined the group. It got me interested in all kinds of weapons and fighting styles that were used at different times in the past. I am also studying herbalism of the Dark and Middle Ages”. 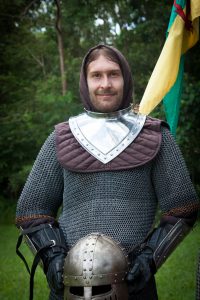 Wade Kahlow
“I enjoy reenactment for the friends you make, with a community of like-minded people.
The Viking age is my favourite Era because of the history, lots of epic stories of adventure, heros and tyrants, of emperors and empire’s – the stuff of myths and legends. The Vikings were some of the best sailors and adventurers of the world and made many of them famous like Harald Hardrada. If I were to pick being a historical figure, it’s a hard choice but I would take the great Varangian King of Norway who unsuccessfully invaded England in 1066. And if I could have any item from history, it would be a suit of gothic plate armor, kings and lords alike would pay 1000 gold pieces or more to have the best money could buy”. 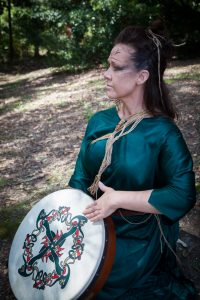 Alison first became involved with medieval reenactment in Brisbane in the 1990s. Feasting and fun- she was hooked! Since then,
her enduring love of all things historical, musical – and let’s face it, dressing up! – has continued for this PhD student based at USC.
“It’s great to see groups like MCMA bringing medieval fun and learning to the Sunshine Coast”, enthuses Alison.

Jenny Catalano is a children’s writer and illustrator. She lives in Eastern Australia where she is inspired by the natural environment and drawn to ancient worlds through her family history.