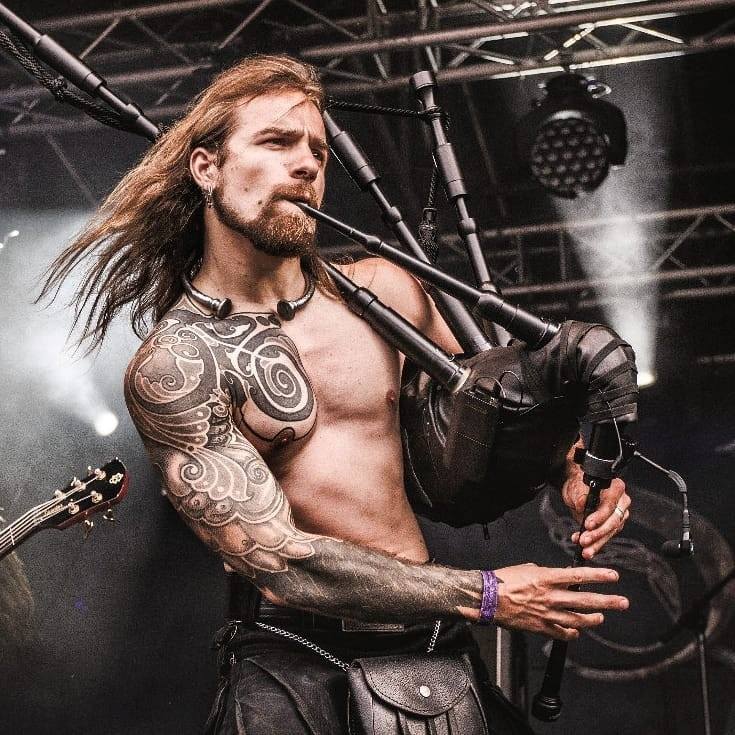 Metalhead Piper. This isn’t the typical job description that you find on a resume. You might find Metalhead Guitarist or Metalhead Drummer, perhaps even Metalhead Vocalist, but Metalhead Piper? And yet as interesting as this moniker sounds, it doesn’t begin to describe the talents of Pereg Ar Bagol, a multi-faceted musician from Southwestern France who not only plays the Scottish and Boha Bagpipes. He also plays the Diatonic Accordion, performs wonderful vocals, and even records tracks in Mongolian Throat Song.

I met Pereg on Facebook. Gotta love an algorithm that offers a picture like the one on the left with the offering, “Add Friend”, right?

However, what intrigued me about Pereg wasn’t just the photo (although it’s a darned good photo). It was the uniqueness of what he represented. I love the fusion of ancient and modern, and while I don’t mind a well-sung traditional Irish or Scottish ballad, I often think that many classic Celtic tunes can be much improved by adding a baseline and a drum kit. Looking at Pereg, I could see that he has obviously worked with both, which was the reason I had to reach out and get to know him better.

And his work did not disappoint. Pereg sent me links to several of his tracks, and I listened to them all. The music was amazing, but so too was Pereg’s versatility. Ironically, this made him difficult to interview. Was he just the piper? Was he a lead singer? Did he record all the tracks himself? (His music is very layered.) Did he play for more than one band?

The answer to all of the above was, “Yes.” And this became obvious when I chatted with Pereg via VOIP. What a life story.

What I first discovered was that Pereg did not begin with music as his career choice. Rather, after high school he went to Brittany and began to study cuisine. He spent 3 years in culinary school and received his diploma. Then he returned to the Pyrenees Region of France and started cooking. However, he soon realized that cooking didn’t fit with him. He didn’t ‘go along’ with the work routine. His fellow chefs wanted to go for a drink, and Pereg wanted to stay in his car practicing his new-found Boha Bagpipes, which are native to the Gascony Region of France. (BTW, not a lot of bagpipers in Southwestern France). His co-workers wanted to stay out late, but Pereg wanted to go to bed early so he could start early the next morning.

If there’s one thing I noticed about Pereg during our interview was his work ethic. Point this young man at a task and voom! He not only works toward his goals, he immerses himself in them. It’s not enough for Pereg to learn how to play an instrument or sing a song. He wants to know about the history and culture of an instrument. He wants to be comfortable with the different vocal styling required to sing in his native Occitan instead of singing in English.

At one point, Pereg told his father that he was going to stop cooking and focus on music. He had also studied bagpipes during his culinary schooling, which inspired this alternative choice. “Just give me one year,” he said. “If I don’t succeed, I’ll go back to cooking.” But within that year not only had he learned to truly ‘master the blow’. He was offered a gig with the heavy metal band, Skiltron. Mind you, the gig didn’t just fall into his lap. Rather, Pereg heard that the band was looking for a piper, and honestly he never thought he would get the audition. However, his girlfriend at the time (yes, sorry ladies he’s got a current girlfriend) told him he would get the audition if he worked hard enough for it.

That’s all Pereg needed. He worked hard, got the audition, and then he was off touring. Another band, Boisson Divine, also came to Pereg – largely because of a network he had started on Facebook called Metalhead Bagpipers. Pereg figured that he wasn’t the only person out there who loved metal music and bagpipes, and he was right. He began a FB group devoted to both types of music, and found many like-minded individuals.

But naturally, Pereg immersed himself. It’s easy to form an online group and let the members just ‘do their thing’. Pereg, however, wanted to meet everyone in the group, and really get to know them. He spent hours chatting with them and learning about them. He helped them set up profiles and interact with other members. He spent so much time networking that he built an amazingly strong community where people could ask for assistance with their music and learn from one another. 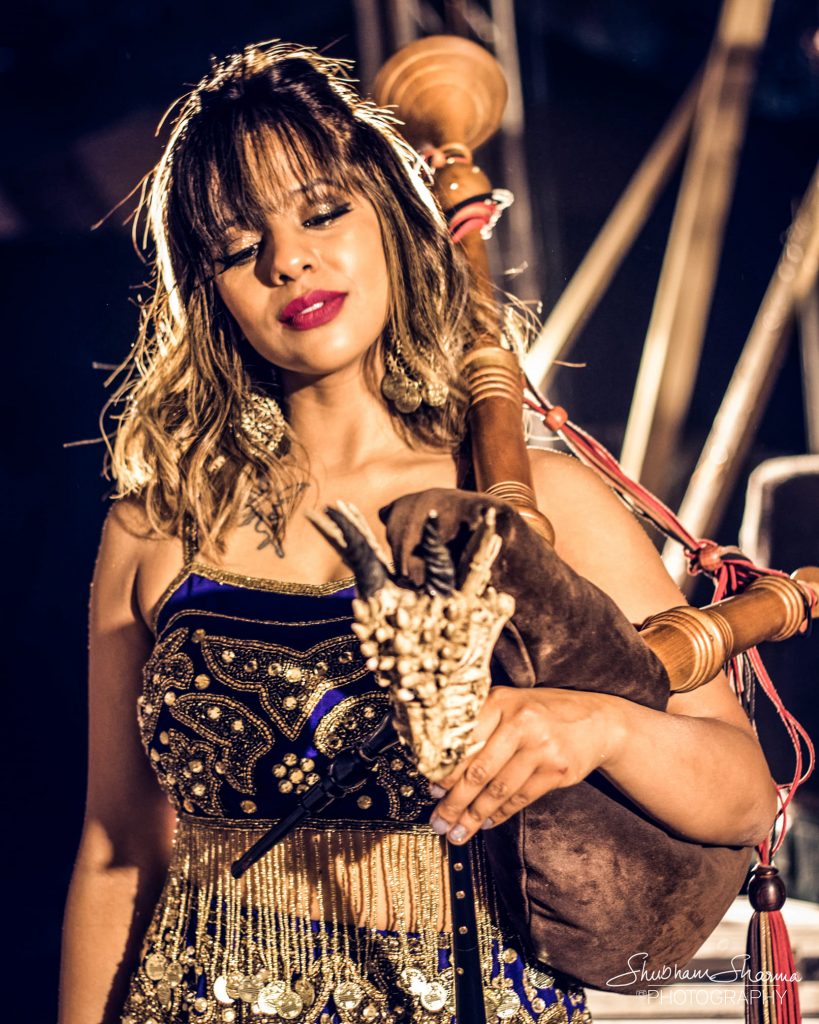 One great story is that of a female piper from India, Archy, who plays the electronic bagpipes – and has a massive YouTube following as The Snake Charmer Piper. When she first came to Metalhead Bagpipers, she asked about the instrument’s requirements. Pereg suggested that she learn the electronic Redpipes because reeds were going to be difficult to find in India. She did, and became so famous that her videos are viewed by millions of people. Check her out at Youtube.com/user/archyJ03.

Eventually, Pereg allowed Metalhead Bagipers to float off into the internet ether so that he could focus on music. In addition to his Gascony Boha Bagpipes, which are different than Scottish Bagpipes, Pereg began to study the Diatonic Accordion. This gave him more musical range, but Pereg had yet to develop what I consider to be one of his best natural assets – his voice. Pereg has a remarkable, clear tone. He sings in a slightly high middle register, but his songs and chants sound like those of an ancient Celtic warrior relating tales of past battles. His voice commands one’s ear and makes you take immediately notice.

And then there’s the Throat Singing. What? Yep, Mongolian Throat Singing. Not bad for a Laddie from Southwest France. I first heard this on “Cernunnos ”, a song from Pereg’s music lab, Celtic Bastard. I thought I was listening to a didgeridoo, which I’ve heard in another Celtic Rock group. Nope, it was Throat Singing, which Pereg was inspired to learn when his brother gave him a Throat Song CD a few years ago. He found the form difficult at first – which is natural, for how many of us sing this way – but he kept practicing while secluded in his car (his own personal sound chamber), and eventually he was able to grind out a few ‘tunes’. I use the term “grind out” because that’s the way I describe Throat Song. However, when mastered this musical form is both primal and riveting. 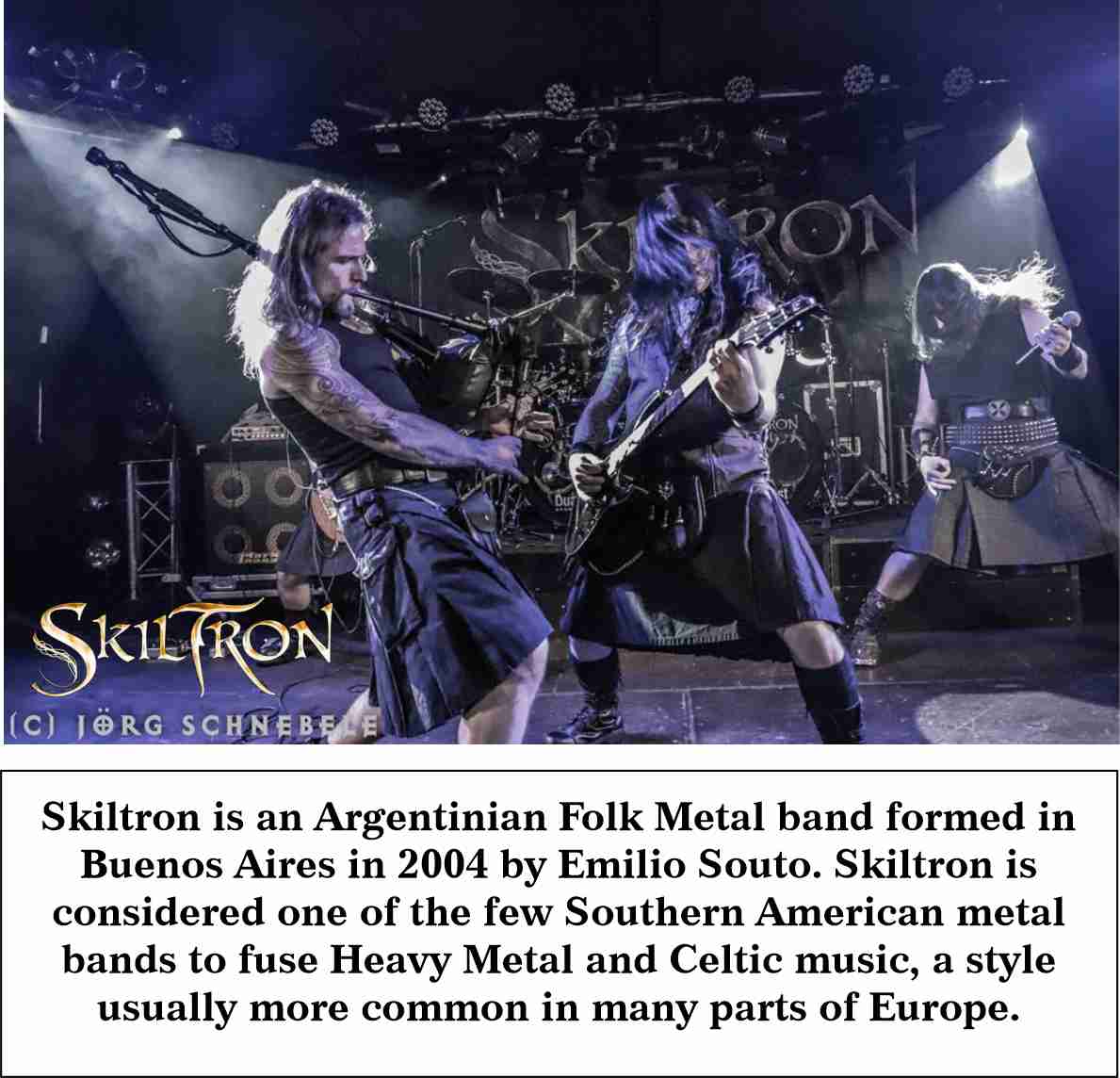 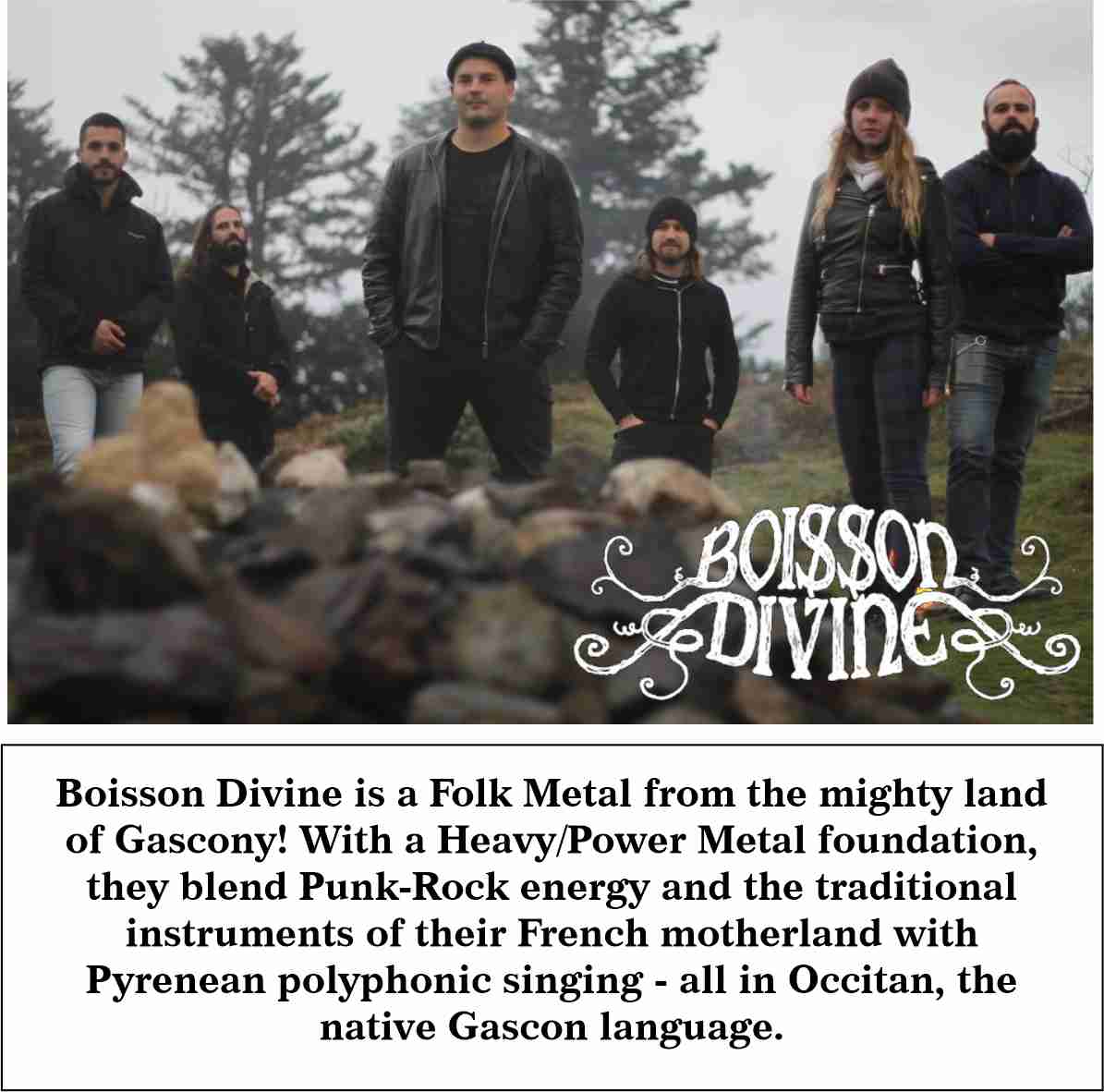 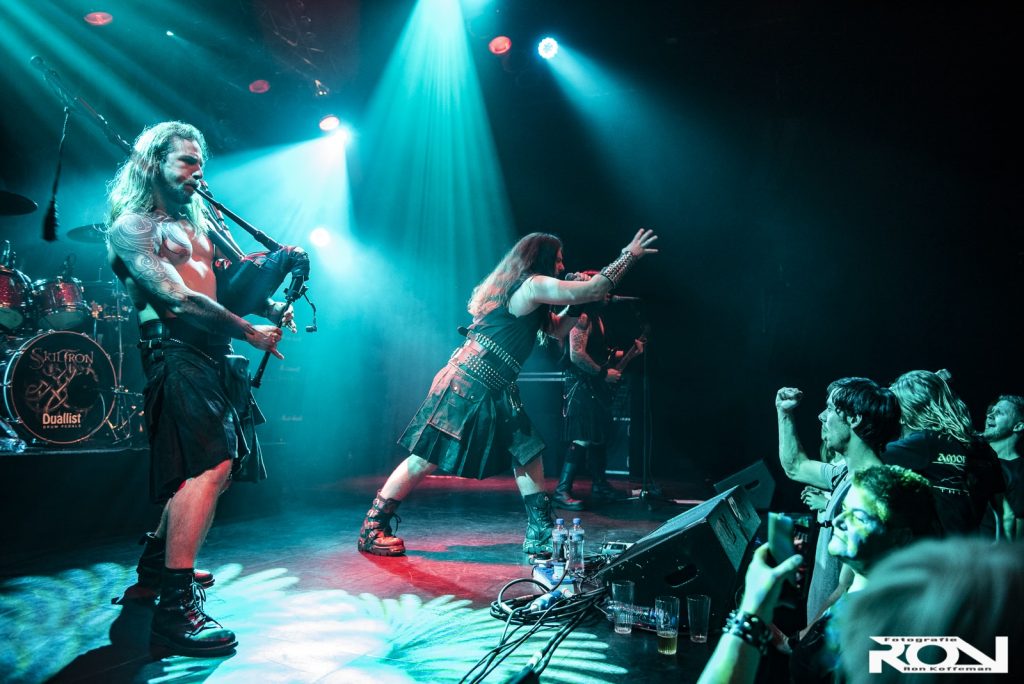 Pereg’s work with Skiltron and Boisson Divine kept him busy, but all that stopped when COVID forced the cancellation of both groups’ tours. However, never one to let ‘grass grow’, Pereg found himself immersed in yet another project. This was the musical collective, (OC)KVLT. The song, “Lo Parapalhon” is their most recent project. Several people contributed to this 9:00+ minute piece, which ranges from ascending harmonic lines to epic orchestrations. At one point, the track falls into the soft ambience of a crackling fire (which almost sounds like the patter of raindrops). Then a woman’s voice fills the emptiness with an “ah” track – only it wasn’t a woman at all! Nope, the voice was that of Luc Arbogast, a man with an 7-8 octave range. Pereg describes him as the “last of the living minstrels”. Luc would travel to cities and just sing, and eventually he got a recording contract with Sony Records.
“Lo Parapalhon” is an amazing collaboration in which the contributors all recorded from home. They sent their tracks to Pereg, who did the mixing along with adding his own vocal and instrumental contributions. I invite everyone to take a moment and listen to this amazing piece.

Pereg hopes to go back on tour once COVID lifts. He even hopes to travel to Mongolia to study with a Throat Song master. In the meantime, he teaches Gascony Bagpipes and Diatonic Accordion at a regional conservatory. He’s composing his own work as well, and he’s working on a new song for the (OC)KVLT collective. You can find his music lab, Celtic Bastard, on Bandcamp. You can find tracks from both Skiltron and Boisson Divine on YouTube. Both bands have albums, while Celtic Bastard releases tracks individually. Check out Pereg’s YouTube channel: Youtube.com/channel/UCqiMHJHxVdZZI7UtvLMc_bg.
So here you have the story of a Metalhead Piper, a ‘renaissance man’ in many ways and a natural-born minstrel.