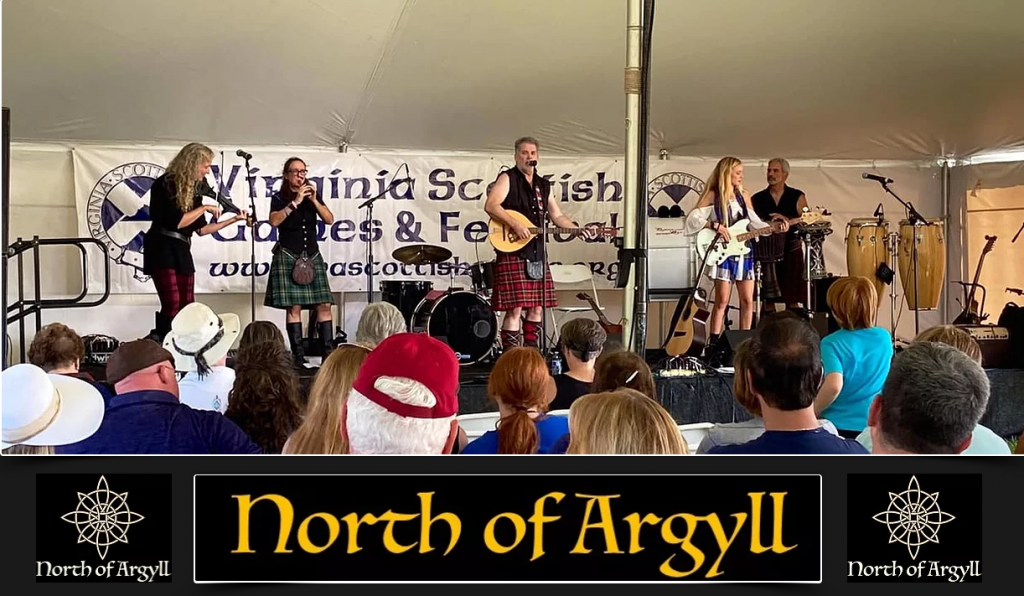 North of Argyll, are an up and coming Celtic Fusion band who hail from the sunny shores of Florida.

The bands founder Paul Macleish was born and raised just south of the Scottish Borders in the United Kingdom. Paul settled in Florida and started the band Macgilliossa in 2015. The band changed its name to ‘North of Argyl’l in 2019, due to the fact people were having issues pronouncing ‘MacGilliossa.’ As Paul said,’ Having a name nobody could pronounce, did not enhance the band as tall.

The band started playing local pubs and bars, and quickly became recognized as a band that delivered more than music. Paul spent fifteen years working at the Disney Institute in Florida, and has learned that the key to entertainment is to exceed expectations of the audience. The ‘North of Argyll,’ show became a celebration of the Celtic culture, where songs are proceeded by the story explanation, and in true Scottish style, the performance, is high on audience interaction and humor.

Paul, mentioned that the goals of their performances, is to entertain the audience, with great foot tapping dance music, and to leave the audience with a gift of new knowledge about their Celtic roots.

Paul describes the bands musical style as Celtic Fusion, or Modern Celtic. He jokingly says its like rock music, with less volume, and you can hear the words. It is a cross between Jazz, Rock, and Traditional, using Bagpipes, Fiddle, Irish Bouzouki and percussion such as, Congas, Djembe and Dumbek. The band decided against the use of a full drum kit, as a more traditional percussion sound played with a Jazz, or Funk beat, provides a unique sound, and blends with the Celtic style.

The band has seen a huge rise in interest since the end of the Covid lockdown. They have played large Celtic festivals, across the USA since 2018, leaving their bar and club roots, and focusing on bigger audiences. Considered a main stage large festival band, they also have a theater show, which was playing in several theaters until Covid hit in 2020. They are hoping to rejuvenate the theater show ‘Out of the Glen,’ in 2022.

The Name ‘Out of the Glen,’ ties into our theme of ‘Celtic Adventure.’ Both Paul Macleish, and Scotty Scott, the bagpipe player for the band, are avid long distant hikers. They often hike long distance trails in the Scottish Highlands. Their favorite hiking areas are in the Western Highlands, up by Fort William and Glencoe, areas just north of the region known as ‘Argyll’. ‘Argyll,’ is the ancestral home to the Clan Campbell. When asked where their favorite place on earth is, Paul once answered, ‘North of Argyll,’ and the band name was born.

The band released a CD in March 2021, this CD called ‘Out of the Storm.’ The CD was written and recorded during the Covid lockdown of 2020. The name ‘Out of the Storm,’ is in reference to everyone who came through the Covid storm safely, and in honor of those who died.

The band is planning a 2022-3 tour of Scotland, a new CD in March 2022, and are focusing on playing the Celtic festival circuit and theaters for some time to come. ‘North of Argyll,’ are a band definitely worth seeing if they are playing near you.

For more information on the band, their music and dates when they are playing, please visit their website at northofargyll.com