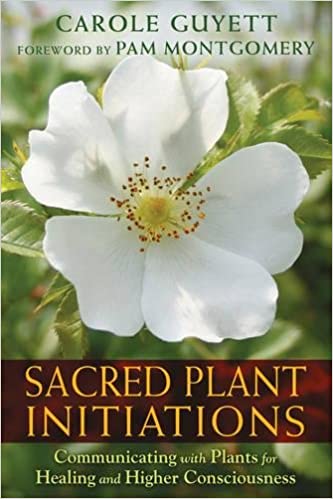 I was drawn to reviewing Sacred Plant Initiations by its title since I use and value initiation ceremonies for communicating with plants.  Also, in first flipping through the book I came to its colored photographic plates with the first photo being of Guyett’s labyrinth.  The first thing I did in moving last year to the Hudson Valley of New York was to construct a labyrinth which is also a part of our initiation ceremonies.  Carole Guyett describes the labyrinth as holding divine feminine energy with wholeness in balancing the male and female.  With my Sami connection I learned that the Sami believe that when they walk their feet connect with their deceased ancestors who walked upside down in the underworld and since walking the labyrinth is trance inducing it opens the door for communication with the ancestors.  That’s why many labyrinths are found in Lapland.

Central to Carole Guyett’s sacred plant ceremonies is what she refers to as the plant diet, i.e. ingesting an elixir of the plant whether it is a tea infusion, a decoction, tincture, oil, a wine or beer, vinegar, or a plant essence preparation.  She offers with each plant chapter several recipes for the plant elixirs that she uses in her initiation ceremonies.  My early introduction to the use of medicinal plants was to read about the use of the plant essence, some part of the plant that has been repeatedly watered down to where next to nothing of the plant exists in the elixir.  At the time this did not make sense to me.  I thought that the plant substance is what promotes healing.  But, at the same time in my use of ecstatic trance I valued the many animal spirit guides that have come to me, and I do not ingest anything of the animal for it to have a major influence on my life.  With this realization my thinking changed. I’ve come to value the belief that I do not need to ingest anything of the plant for the plant spirit to have a significant effect in my life.  Ceremonially ingesting a plant elixir though can be a part of the initiation ritual and adds to bringing alive within me the spirit of the plant.

Carole Guyett has impressive credentials in the number of different mentors she has worked with first in England at the School of Herbal Medicine, Findhorn in Scotland, and Perelandra in the United States.  Upon moving to Ireland she also trained under an American Indian medicine woman, Arwyn DreamWalker and with Peruvian shamans.

In the first 65 pages of the book she lays out the necessary features for creating initiation ceremonies to communicate with and experience the consciousness of plants, the plant spirit.  There are many gateways in ceremonially communicating with plants.  It is important to work with the whole plant and the whole person.  These ceremonies are not experienced in normal consciousness but in an altered state of consciousness and require honoring the plant and plant spirit.  To connect with the plant spirit one needs to be authentic in performing the ceremony.  One goes to the plant with a relaxed and trusting attitude, and with clear intention to connect.   One goes to the plant, seeing its beauty with wonder and gratitude while introducing one’s self and explaining one’s intent.  The plant needs to be experienced with all five senses of sight, touch, aroma, taste and sound.  Listening to the plant is through the heart by paying attention to your feelings and of what comes to mind, spending time with the plant without judgment or comparison, and finally giving thanks to the plant while leaving a gift.

In preparing the plant elixir this same attitude of honoring and listening to the plant is most important, asking permission with sacred intent for harvesting, preparing the elixir and learning what part of the plant to use.  Tinctures, wines and beers, and other preparations often take longer and need to be prepared weeks or even months before the initiation ceremony, though each step of the way requires the ritual of honoring and listening to the plant, thus bringing you in communion with the plant.

For the initiation ceremony the person needs to prepare the self generally three days ahead of time with a period of purification by fasting or restricting what is eaten (no meat, refined sugar, alcohol, strong spices, and artificial additives).  For the initiation ceremony a sacred space is needed that is clean, clear and safe, and the sacred space is entered with clear focus of intention and with no distractions.  The sacred space includes an altar for appropriate items such as a vase holding the sacred plant or maybe a drawing or piece of artwork that represents the plant, and a vile of the elixir.  The sacred space may be outside next to the plant, in the labyrinth or in a special inside space.  Each person is cleansed with smudging with the smoke of a sacred herb, and an invocation for calling the spirits from each direction is offered before offering a few drops of the elixir to our Earth Mother and then ingesting it.  These ritual steps aid in bringing about the induction of an altered state of consciousness. In my induction of ecstatic trance the next step would be to quieting the mind by following one’s breathing for five minutes, the time that I would think would be perfect for doing the green breath, a method for joining with the plant through breath and music developed by Pam Montgomery and valued by CaroleGuyett.

My use of ecstatic trance is quite parallel to Carole Guyett’s ceremony.  I follow each of her steps except that I now have added her feature of ingesting the elixir after calling the spirits and again at the end of the ecstatic trance induction. With my use of ecstatic trance after smudging and calling the spirits, the participants proceed to quiet their minds. I use drumming or the shaking of a rattle to induce trance and I also have the participants stand as does Guyett, but with the drumming we sit or lay in a specific ecstatic posture.  My mentor Felicitas Goodman in her research of ecstatic trance examined the ancient art of the hunter and gathering people and found what she believed were the sacred postures used by the shamans of the tribe.  In experimenting with these postures she found that some postures were for bringing into the body a healing energy, some were for divination of finding answers to question and others were for metamorphosis or shape-shifting.  Then there were the postures for spirit journeying, some for going into the underworld, some for journeying in the middle world and some for going into the upper world.  The last described postures were for initiation providing death-rebirth experiences.

In communing with plant spirits we use four of these postures, first a divination posture for asking about the nature of the plant, i.e. becoming acquainted with the plant (the Lady of Cholula Posture).  In the second session we use a healing posture with the right hand resting upon the heart that is holding a piece of the plant, i.e. falling in love with the plant (the Chiltan Spirits Posture).  For the third session the posture we use is a shape-shifting posture to become one with the plant, i.e. marriage (the Olmec Prince Posture but with fingers splayed as if they were roots).  In the fourth session we use an initiation or death-rebirth posture that brings about a change in one’s life, i.e. a change that occurs sometime after the beginning of the marriage (the Feathered Serpent Posture).

At the conclusion of the initiation the trance experiences are shared.  The trance or dreamlike dreamtime experiences, whether from Guyett’ Initiations or from ecstatic trance, are generally narratives, often metaphoric, that tell a story that is relevant to a person’s personal life, a story that is healing physically, behaviorally, mentally, emotionally and/or spiritually, thus these experiences go beyond healing some limited physical symptom as is expected by a commercial pharmaceutical.

Carole Guyett beautifully adds a number of other ritual activities to initiate the trance experience including the Wheel of the Year, the Wheel of Light, the Green Breath, and singing with the plant while using the plant’s song.

In the Wheel of Light she leads the participants to call upon and bring the spirit of the plant into each of the chakra.  The litany for this Light Wheel along with a combination of drumming and new age music beautifully induces trance, with the litany and music available on the Inner Traditions website: https://audio.innertraditions.com/saplin/   At this same website is CaroleGuyett’s litany and drumming for meeting the plant in nature and an example of singing with the song of the plant.  Each provides beautiful experiences in journeying with the plant’s spirit.

Of the eight plants of the Wheel of the Year I was most strongly drawn to the plant of the Winter Solstice, St. John’s Wort.  Over the years as a psychologist I frequently worked with people with depression during the winter months, a problem often diagnosed as seasonal affective disorder.  At the time of the winter solstice, the shortest day of the year, the bright yellow flowers bring the light of the sun, the power to cast out negativity and to dispel darkness.  This light bringer has traditionally been effective in resolving numerous physical problems such as opening obstructions, dissolving swelling, and closing wounds.

What I looked forward to the most was the last section of each chapter, the Dreaming with … section where she offered the dreaming/trance experiences of her initiates as they journeyed with the plant spirit.   I find that these journeys with the plant spirit guide provide the core of plant healing.  The many chemicals offered by a plant and the wide range of maladies that a plant may treat becomes very complicated, but the plant spirit knows and can determine which chemicals are most needed to aide in curing a specific malady.   More than providing a chemical cure, the plant goes to the cause of the problem which is most likely something more behavioral, mental, emotional or spiritual, and the spirit of the plant gives direction to the initiates for what needs to change in their lives.  The Dreaming with… experiences revealed the behavioral, mental, emotional or spiritual changes needed.  For St. John’s Wort Guyett offers six areas of trance experiences.  Each are related to receiving light in overcoming depression or enhancing energy: Receiving Light, Lightening Darkness, Releasing Old Patterns, Reconnecting with Nature and Spiritual Guidance, Enhancing Creativity and Anchoring New Energies on Earth.

Rather than trying to second guess which plant substance should be ingested for which malady, I find the picture much clearer by relying on the plant to make this decision.  I have sometimes found that in going to one plant, the answer I receive is that I need to take the problem to a different plant.  By ingesting a plant elixir with honor and respect as suggested by Carole Guyett the plant remains in charge.  Sacred Plant Initiations is a very valuable and beautiful book in showing us what I would consider this more powerful approach to plant healing.