SO, WHO WERE THE CELTS? 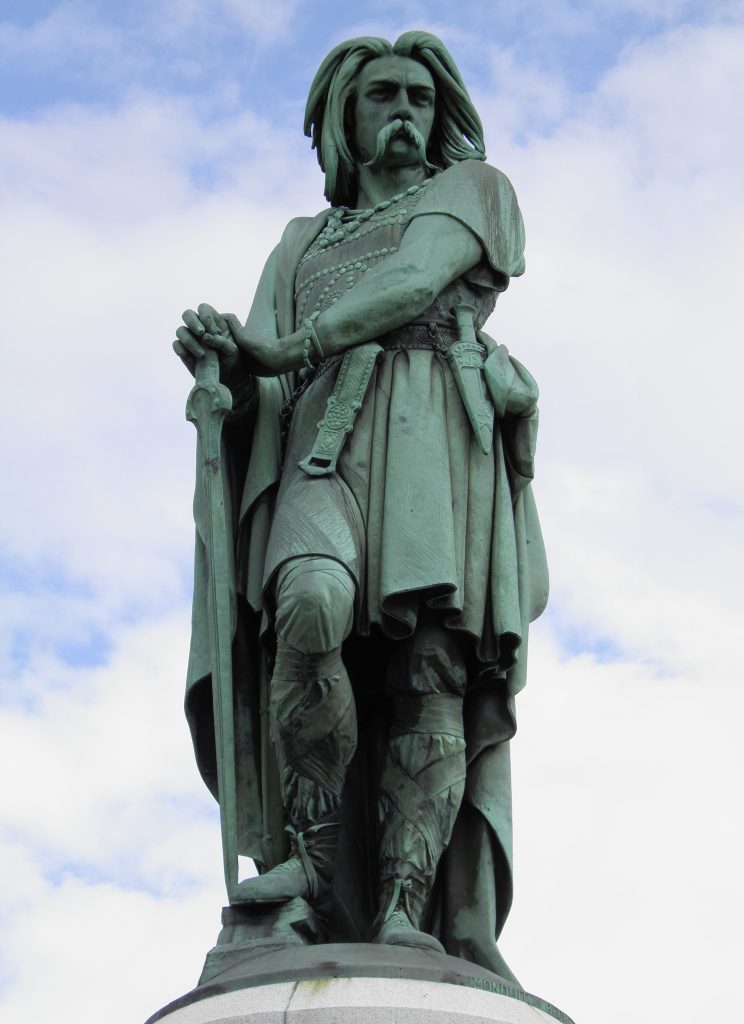 So, who were the Celts?
The ancient Celts inhabited lands that stretched from Spain to the Black Sea. Geographically, they were one of the largest populations to call central Europe ‘home’.
The trick in tracing Celtic history is that the ancient Celts did not leave any written records. Indeed, much of what we know about the ancient Celts comes from the Greeks and Romans, who tended to ‘scuffle’ with the Celts from time to time – okay, the Celts sacked Rome in 387BC, but that’s beside the point.
Funny enough, the Celts did not call themselves Celts. We actually have no idea what they called themselves. We call them Celts because the Greeks called them Celts – or more accurately called them the Keltoi. This name dates to 540BC and describes a Celtic tribe living on the southern coast of France. Barbarians of the French Rivera? Hmmm, maybe the Greeks were just jealous.
The Celts were never a kingdom or an empire. They were a collection of hundreds of different clans and chiefdoms, all of which shared a distinctive language. So being a Celt was not a blood bond. It was a cultural bond, or creed. Think The Mandalorian, and you might get the gist.

So, were the Celts barbarians?
Well, that depends on your point of view. The word “barbarian” is a Greek term describing all non-Greek people. This included Persians and Egyptians as well as Celts. The original Greek word is “bárbaros,” meaning “babbler”. To the Greeks, anyone speaking a foreign tongue made unintelligible sounds (“bar, bar, bar”). Similar words exist in other Indo-European languages, including the Sanskrit “barbara,” which means “stammering.” So if the Greeks could not understand the Celts, yep they were likely barbarians.
As mentioned, the Celts did not leave a written history, so descriptions of the Celtic people come from their adversaries. The Greeks knew them as hard-drinking, hard-fighting savages – which might be a badge of honor for some of the Celts that roam about today’s renaissance fairs.
The Romans called the Celts Galli or Gallia, and frequently clashed with Celtic tribes that invaded Roman outposts in Northern Italy. As also mentioned, the Celts sacked Rome in 387BC under the command of a Celtic warlord named Brennus. This sealed the barbaric reputation of the Celts, who pillaged Rome and put most of the Roman Senate to the sword. Julius Caesar embarked on his nine-year Gallic Wars to defeat the Celts and other tribal kingdoms in Gaul (modern France). Caesar wrote about his conquest with a mix of disgust and respect for his Celtic enemies. Since he saw a clear difference between the civilized world of Rome and the Mediterranean and the unwashed Gauls, he felt justified in colonizing them.
Caesar defeated Vercingetorix, chief of the Celtic Averni tribe, in 52BC, strangling him to death as part of a Roman triumph (who’s the barbarian again?).
About a century later, during the reign of Claudius, the Romans subjugated the Celts in Britain. Queen Boudicca led a bloody revolt against Roman rule in 61AD, during which she sacked Londinium and massacred the inhabitants.
Women were allowed to hold positions of authority in Celtic cultures, which was quite different than in Roman society. They played important roles in military operations, while Druidesses specialized in political prophecy that chiefs used to boost troop morale.
“Clearly Celtic women were occasionally allowed to take on the position of supreme authority, which was distinctly different from the Mediterranean world,” says Bettina Arnold, an anthropology professor at the University of Wisconsin-Milwaukee and the founding editor of e-Keltoi: Journal of Interdisciplinary Celtic Studies. “The Greeks and Romans found that extremely odd.” 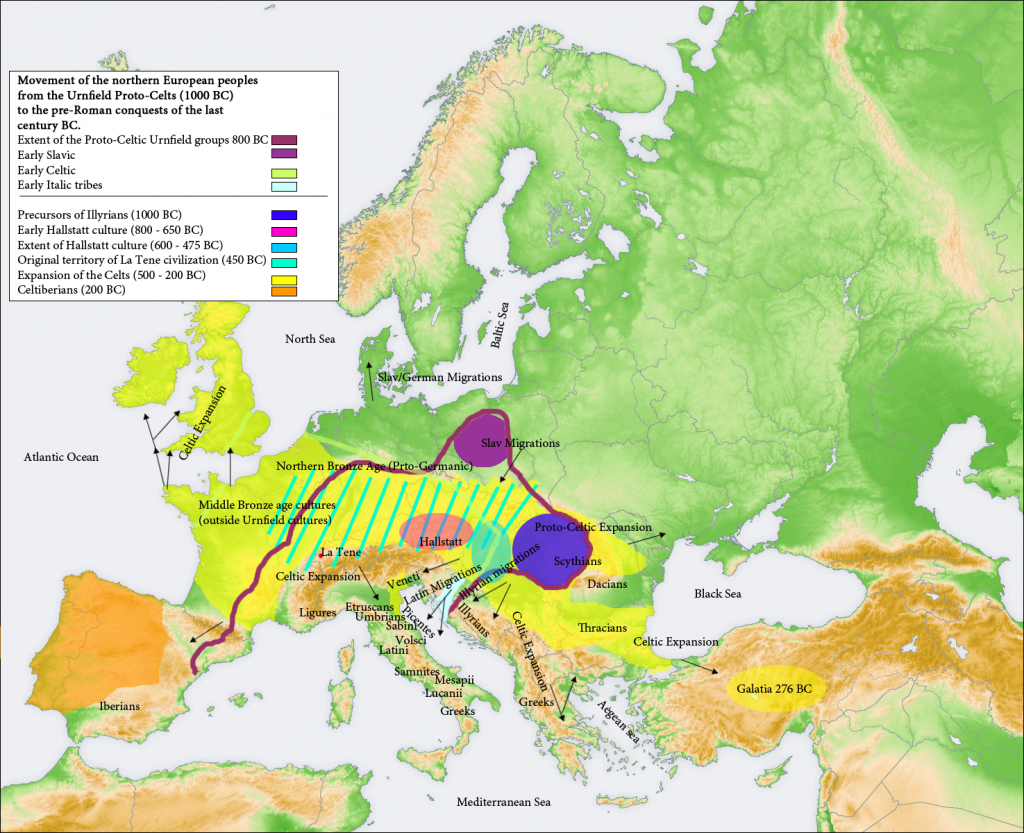 So, did the Celts migrate throughout Europe?
We all know that the Celts settled in western Europe, but they also settled in southern and eastern Europe. The Celtic culture is thought to have been founded near the Rhine, Rhone and Danube rivers, and the Celts certainly expanded down the Danube and along its tributaries.
In the 3rd century BC, one of the most influential tribes, the Scordisci, established their capital at Singidunum, which is now present-day Belgrade in Serbia. A Celtic tribe called the Serdi inhabited Thrace. They founded Serdika, which is now Sofia in Bulgaria.
The Galatians settled in Anatolia, and despite their geographical isolation from the rest of the Celtic world, the Galatians maintained their Celtic language for at least 700 years. St Jerome, who visited Ancyra in 373AD, which is now modern-day Ankara, likened their language to that of the Treveri of northern Gaul.
The Boii tribe gave their name to Bohemia, Bologna and possibly Bavaria, and Celtic artifacts and cemeteries have been discovered further east in what is now Poland and Slovakia. A Celtic coin (Biatec) from Bratislava’s mint was displayed on the old Slovak 5-crown coin.

There are even records of Celtic mercenaries in Egypt serving the Ptolemies. Thousands were employed in 283–246BC, and they were also in service around 186 BC when they attempted to overthrow Ptolemy II.
After the Roman conquest of most Celtic lands, Celtic culture was further trampled by Germanic tribes, Slavs and Huns during the Migration Period of roughly 300-600AD. As a result, few if any people living in Europe and the British Isles identified as Celts until the 1700’s, when the Welsh linguist and scholar, Edward Lhuyd, recognized the similarities between languages like Welsh, Irish, Cornish and the now extinct Gaulish, and labeled them “Celtic.”

So, how about that Celtic language?
The earliest known inscriptions in a Celtic language were found in Northern Italy and dated to the 6th century BC. In 1707, Edward Lhuyd identified two Celtic language families, P-Celtic or Brythonic, which is Welsh, Breton, Cornish, and Q-Celtic or Goidelic, which is Irish, Scots Gaelic, Manx. He assumed that the Brythonic languages came from Gaul (France), while the Goidelic languages came from Iberia (Spain and Portugal).
The six living languages are Breton, Irish, Scottish Gaelic and Welsh, Cornish and Manx. They have a rich literary tradition with some Lepontic inscriptions dating to the 6th century BC Alps. Early Continental inscriptions used Italic and Paleohispanic scripts. Irish and Pictish were occasionally written in the 4th and 8th centuries AD. Welsh has had a continuous literary tradition since the 6th century AD. 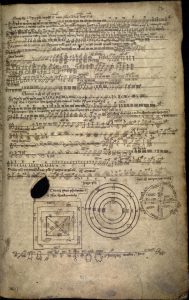 Ogham (OG-əm – Middle Irish: ogum, ogom, and later ogam) is a medieval alphabet used to write the early Irish language. There are roughly 400 surviving Ogham inscriptions on stone monuments throughout Ireland and western Britain, the bulk of which are in southern Munster. The largest number of inscriptions outside Ireland are in Pembrokeshire, Wales, and the vast majority of them consist of personal names.
The names of trees can be ascribed to the individual letters in Ogham, which is why the script is also known as the Celtic Tree Alphabet. In Irish, the word “og-úaim” means ‘point-seam’, referring to the seam made by the point of a sharp weapon. Hence the hashmark style of the script.
The Book of Ballymote (14th century AD) contains treatises on the metre and the profession of a poet, and on the Ogham writing and language.

So, kilts or pants?
The ancient Celts were famous for their colorful wool textiles, forerunners of the famous Scottish tartan. While only a few textile scraps have survived, historians believe that the Celts were one of the first Europeans to wear pants. They didn’t have buttons so they fastened their clothing with clasps called fibulae. These pants would have been much more practical than anything the Romans wore on their legs… oh, wait. BTW, the Scottish kilt was a later invention that first appeared in history as the great kilt dating back to the 16th century AD. 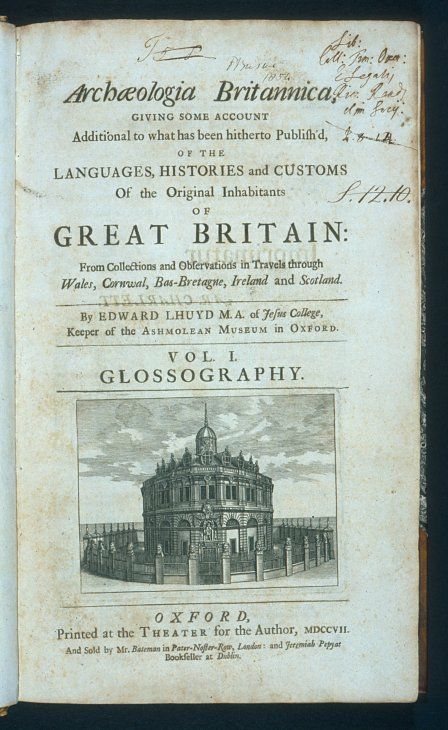 So, is it Keltic or Seltic?
This is a fun one to toss out at a festival. Any basketball fan is certain that the letter ‘c’ in Celtic is a soft sound, as in the Boston Celtics. Anyone who studies Celtic history knows the word began as Keltoi, and so the ‘c’ is a hard sound, as in Celtic Woman and Celtic Thunder.
Indeed, the pronunciation has changed over the ages, and as usual we can blame the Romans for starting it. When Rome adopted the name Keltoi from the Greeks, they spelled it Celtae, but the ‘c’ was a hard sound. Incidentally, Caeser is also a hard ‘c’ word even though we all ask for a ‘S’easar Salad.
When Latin became the Romance languages, the ‘c’ became soft, as did all other ‘c’ words when the consonant is followed by an ‘e’ or ‘i’, unless noted by punctuation such as the French ‘ç’ (c cedilla).
Some who argue for Seltic note that the word came into English in the early 1700’s from the French word celtique, which refers to certain peoples of the British Isles.
Some who argue for Keltic note that the word was used in the late 1800’s to benefit the Irish immigrant population of Glasgow’s east end. The name Celtic was chosen to reflect the common roots of the Scots and Irish, who were subject to a great deal of sectarian prejudice. The term (hard ‘c’) Celtic was mostly used in academic circles, however, and was largely mispronounced by the local population.
“‘Celtic’ is a descriptive term – a ‘heuristic device’ in academic lingo—shorthand for something that we can see archeologically, and we can see in the place name record, and we can see in the linguistic evidence,” says Bettina Arnold. “While it may not have actual meaning in terms of identity, it’s still useful as a descriptor.”

So, where are they now?
The 19th and 20th centuries have seen a full-blown Celtic revival in the British Isles driven by political anger over British rule in places like Ireland, Scotland and Wales. Musicians, artists and authors proudly embraced their Celtic identity, and today it’s quite easy to find a Celtic gathering, be it an Irish Music Festival or a Scottish Highland Games.
Celts are everywhere, and the more the merrier. It’s been a tough slog over the eons, but the Celts stand proud and strong, and ready for a glass of Guinness or a shot of single-malt.