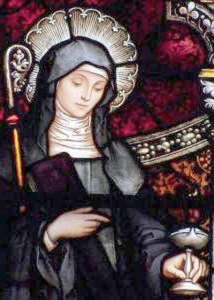 The Legend of St. Bridget and the Christ Child by Anita Booth Brown

The Christmas legend of St. Bridget, Muire na nGael or “Mary of the Gaels”, is encompassed by the Celtic belief in thresholds.
Bridget, intermingling the Christian and pagan, was named for the pre-Christian raven-haired Celtic goddess. She was born during the time of Saint Patrick, on the threshold of the Christian conversion of Ireland. Her Druid father, Dubhthach mac Dreimne, impregnated his Christian Pictish slave-girl Broisearch. His infuriated wife insisted that the heavily pregnant slave be sold or she would leave, taking her dowry with her. So sold the slave was.
Near dawn, as Broiseach was crossing the threshold of her new master’s dwelling carrying a full pail of milk, Bridget was born. Being born betwixt and between night and morning on Imbolic, the threshold of Celtic Spring, midway between the Winter Solstice and the Spring Equinox, it is not surprising Bridget was thought capable of crossing over to other thresholds.
To the Celts, time was circular not linear. The Celts left God to come into the world, then at the end of their lives they hopefully returned home to God. Cracks permeated the thresholds of these worlds, especially at certain times, places, and dates.
Thus, Christ’s birth mass celebration on the 25th of December was no accident. It is very near the in-between times of Winter Solstice and the crest of the New Year. Barriers are removed during these times when the veil between heaven and earth are thin, and by the grace of her God, Bridget was allowed to move freely between.
John Phillip Newell, Celtic Christian spiritual leader and historian, retells the ancient legend describing Bridget as a barmaid in the overcrowded inn where Joseph and Mary sought shelter. Bridget was known for miracles involving beer, so that detail is at least plausible. In numerous stories, Bridget gives the weary traveling Holy Couple water to drink and some of her own bannock to eat. The bannock was then miraculously restored whole. Not unusual for Bridget, for she characteristically showed generosity with food.
Because there was no room at the inn, Bridget led Mary and Joseph to the stable and stayed to midwife Mary. Then she became Jesus’ nurse or foster mother, both important roles in early Celtic society. Foster parents were highly ranked socially, and sometimes they were considered sacred.
Still another version of the legend involves angels escorting Bridget to midwife the Christ Child in the stable. Her green eyes sparkled to serve, and her golden-red hair and blue cloak flowed as she is carried the Christ Child, soaring across barriers of time and space.
In another legend Bridget diverted the attention of Herod’s soldiers, who were slaying all male babies, by wearing a crown of candles, enabling Mary and Joseph to escape with their baby son to Egypt. Bridget was known for an eternal flame burning at her monastery, and is often pictured bearing or nearby a flame. Later as Jesus’ foster mother, Bridget used her Sight to find him when he was lost as a child visiting the Temple in Jerusalem.
In these Celtic legends, the miracle of the virgin birth includes the Celts’ favorite Saint, Bridget. The Celts entwined into the holy nativity and childhood a loving legend of their favorite practical, kindly, determined saint. Bridget served the Holy Family as midwife and nurse, caring for Mary and the Christ Child as she had served and cared for the people across Ireland. This mirrored her miracles in Ireland, which included producing an abundance of food and help for the poor.
Did Bridget travel through the thresholds of time and thin places, or was this just another of Saint Bridget’s miracles? Does she still come through the veil separating heaven and earth to aid and comfort in the name of Christ?
Alexander Carmichael says in the 18th century Carminia Galeatica that Bridget was still called upon for blessings during childbirth in the Hebrides. When a woman was in labor, she would stand on the threshold of her house with her hands on the door jams and beseech Bride, Bridget, to come:
Bride! Bride! Come in.
Thy welcome is truly made,
Give thou relief to the woman,
And give the conception to the Trinity.

When Brigid built her monastery and church in Kildare she continued the custom of keeping the fire alight. For her and her nuns the fire represented the new light of Christianity, which reached Irish shores early in the fifth century. In Brigid’s time, the number of her nuns who tended the flame was nineteen. On the 20th day, Brigid tended it herself.