THE CELTIC ART OF BRIAN BOYLAN by Ravensdaughter

This issue, we explore the art of Brian Boylan.

Brian Boylan was born in Skerries, Co. Dublin, nearly right on top of Skerries Harbor. After two years at college, Brian got his first job in animation for Sullivan Bluth Studios in Balgriffin. From there he traveled to London and Australia working for Disney. He then settled in the U.S. working for the major studios; Disney, DreamWorks and Warner Bros. Animation.

Deciding to be a stay-at-home dad Brian concentrated on his own passion, Irish Myths and Stories, which led to current pub scene paintings. Brian has held successful solo and group shows in the L.A. area, and was chosen to be featured for the publication Contemporary Painters. His painting “TainBo Culainge” was chosen for the cover of its translation to Spanish / Portuguese and presented to the President of Mexico.

So, let’s get to know this world-renown artist.

Q: Brian, when did you first become interested in art? What drew you to art personally? Did you have artistic experiences early in life, or was this something you discovered during your school years?
I guess I was always interested in art, and did it at school. It was never a passion, just was always there. I never thought I’d end up doing it. Fishing was more of a passion for me, but that soon evaporated after a month in September on the Irish Sea. I got into Sullivan Bluth studios and from there I was able to travel, working in animation.

Q: Was there a moment when you decided to be an artist? Did you have encouragement and support? Did you pursue art in college?
I did advertising in college but except for the graphic element, I wasn’t that pushed.
The moment I decided to paint was when I saw a box of matches with an illustration from the Book of Kells. I enquired about it, and just had to copy it. After that I just kept going, re-reading the myths of Ireland which initially became my focus. I got encouraged when I sold that first painting. A large Celtic piece inspired by Kells.

Q: Tell us about your work at the Sullivan Bluth Studios? Did it have an impact on your overall artistic style?
The work in Bluth started with cel painting, leading to animation. When you work on the job with the best artists in the world, all from different countries, bringing their own style (and believe me I’m way behind these guys), you’ve no choice but to learn.

Q: Any artist would be super-excited to work for Disney. What did you do for them in London and Australia? Do any examples of that work still exist? Did you work in their animation department? Did you work on any films we might know?
In London I worked on “Who Framed Roger Rabbit” and in Australia “Winnie the Pooh” in different departments. Roger Rabbit was wrapping up, so it was all hands on deck!!!

Q: Were Irish myths and stories part of your childhood, or was that something you re-discovered as you stayed at home with your children? Did you read them Irish storybooks and then say, “Hmmm… I’ve got to learn more about these stories”, or did you tell them stories you learned when you were young, or a combination of both?
All of the above!!!

Q: Your art is so vivid. Your use of color is amazing. When you contemplate Irish myths and legends, do they appear in your mind in this vivid color scheme? Also, how do artistic subjects come to you? Do you plan out an art piece, or does the inspiration just hit you?
No. Each piece will develop and transform, as does the color, as they progress. It’s like they’ve a mind of their own. I never plan out a piece (probably should). Something will catch my eye and I’ll usually build a picture around that. I usually then stick to a particular palette to give the painting a “feel”.

Q: Do certain legends inspire the way you paint? I noticed that some of your pieces seem more fantasy, and some seem more impressionist. “Granuaile” and “First Communion”, for example, are very different pieces. Do you have a few different ‘muses’ speaking to you when you paint?
With “Granuaile”, I had the idea of a fearless lassie taking on the Irish Ocean. That was the initial idea. The rest of the picture grew around this. She had 3 or 5 castles on the west coast? This is her leaving her one on Clare Island. “First Communion” was inspired by an old B&W photo that I built around.

Q: I love your surfboards. How did you get started doing those?
Like everything else, they’re a fluke! 10 artists were chosen to paint surfboards for charity, so I was one of the 10. Then I just did a few more… And I’m doing one right now! 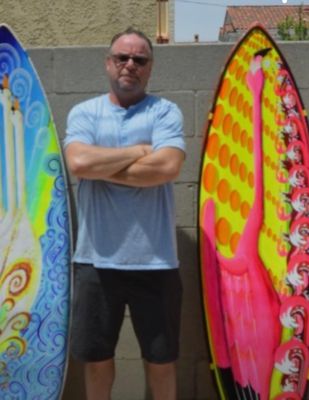 Q: Are you planning any new pieces in the future? Perhaps a gallery show or some festivals when COVID is behind us?
I’ve been pretty productive during COVID, and hope to have a show with the paintings I’ve completed during this time. No location as of yet.

Q: If people want to reach out to you about your work, what’s the best way to contact you?
At the moment, you can email me at boylan6@aol.com. You can also find me on my Facebook. My new website on the way!
Again, thank you Brian for chatting with us here at Celtic Nations Magazine.

The Celtic Art of Brian Boylan 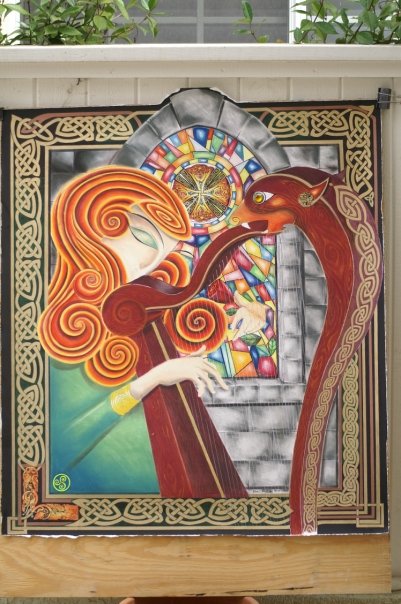 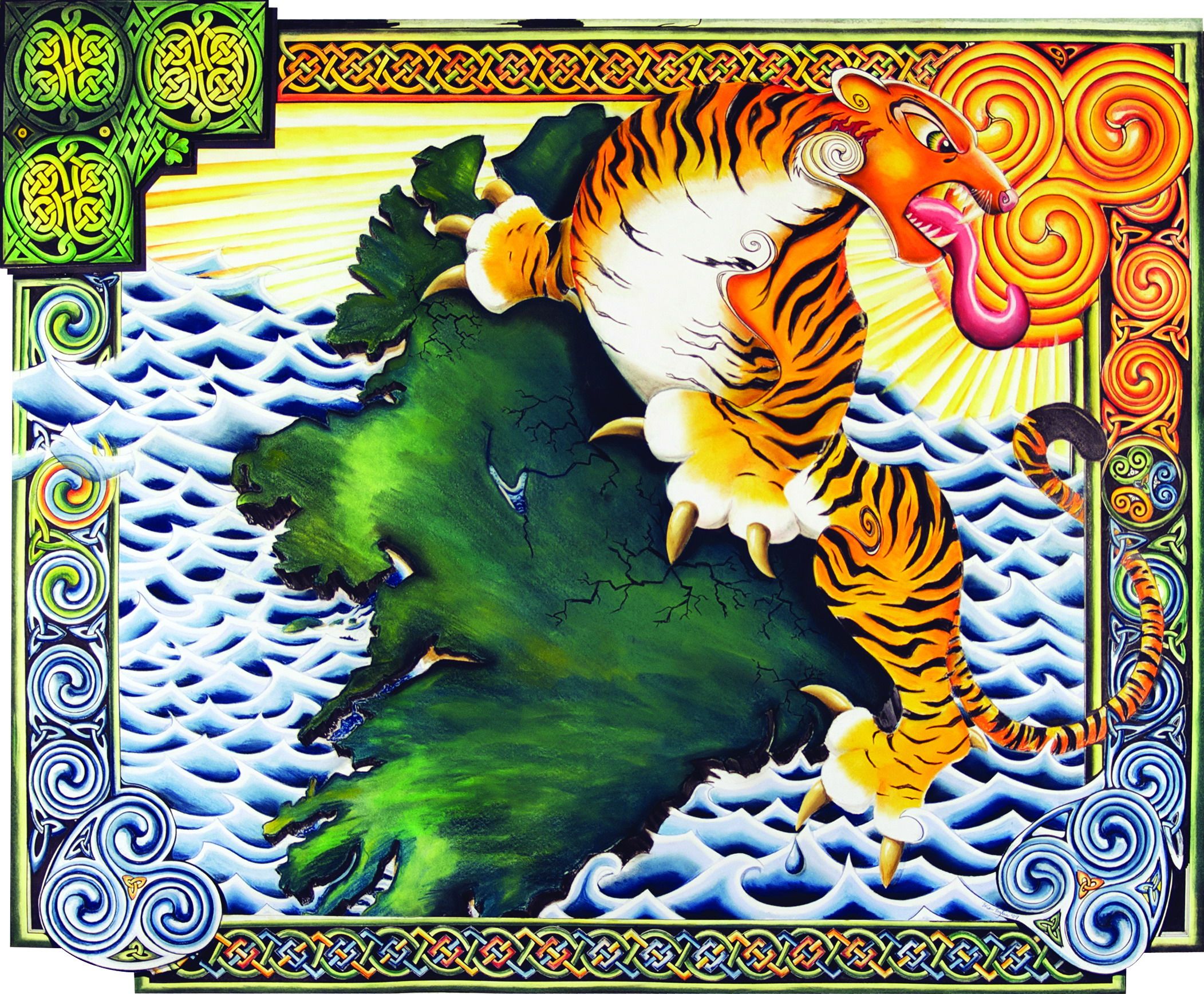 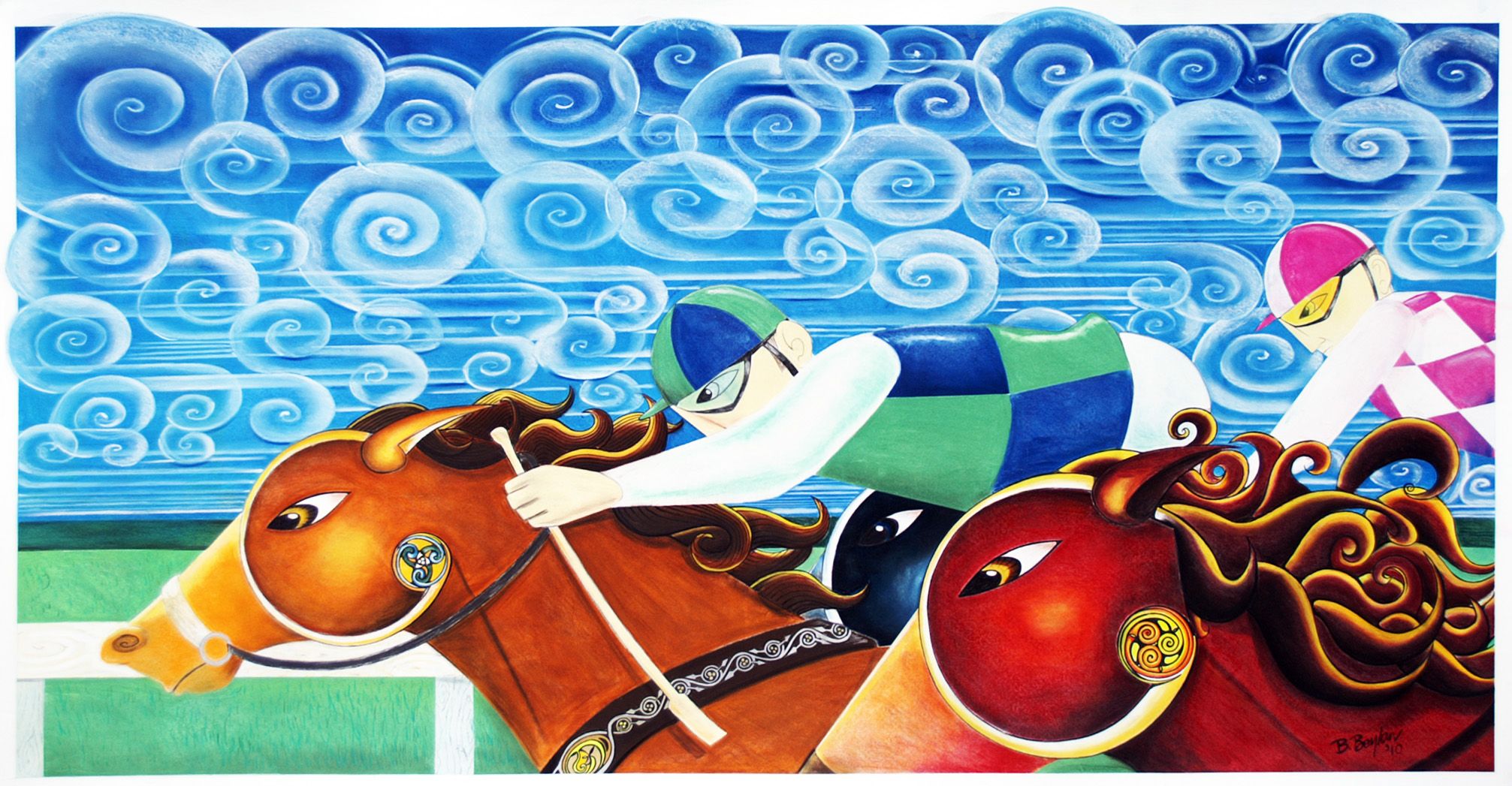 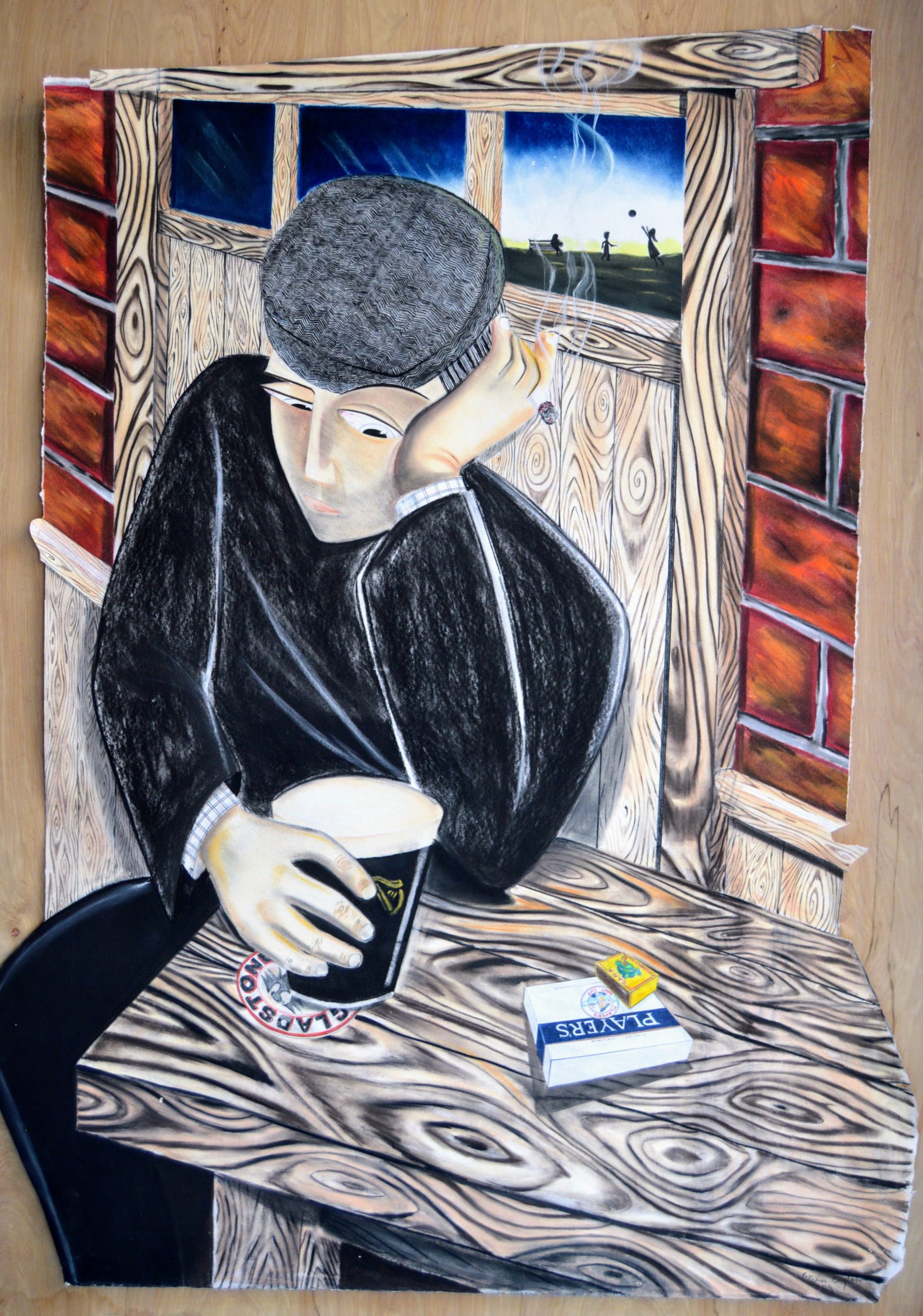 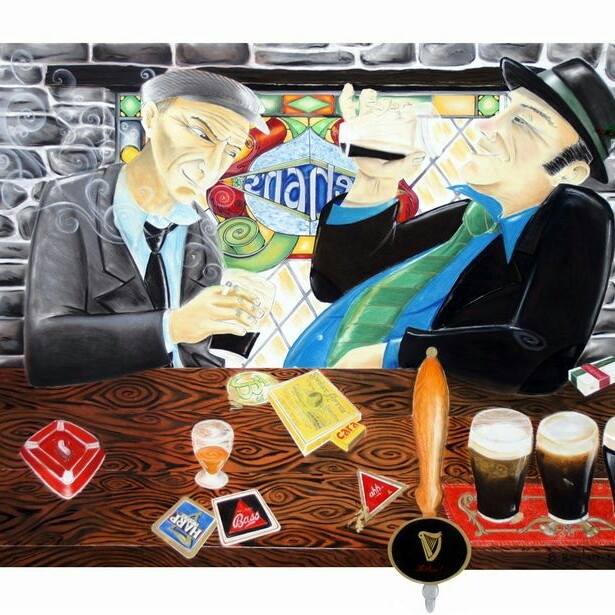 The Art of the Pour 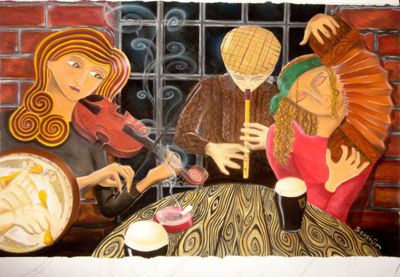 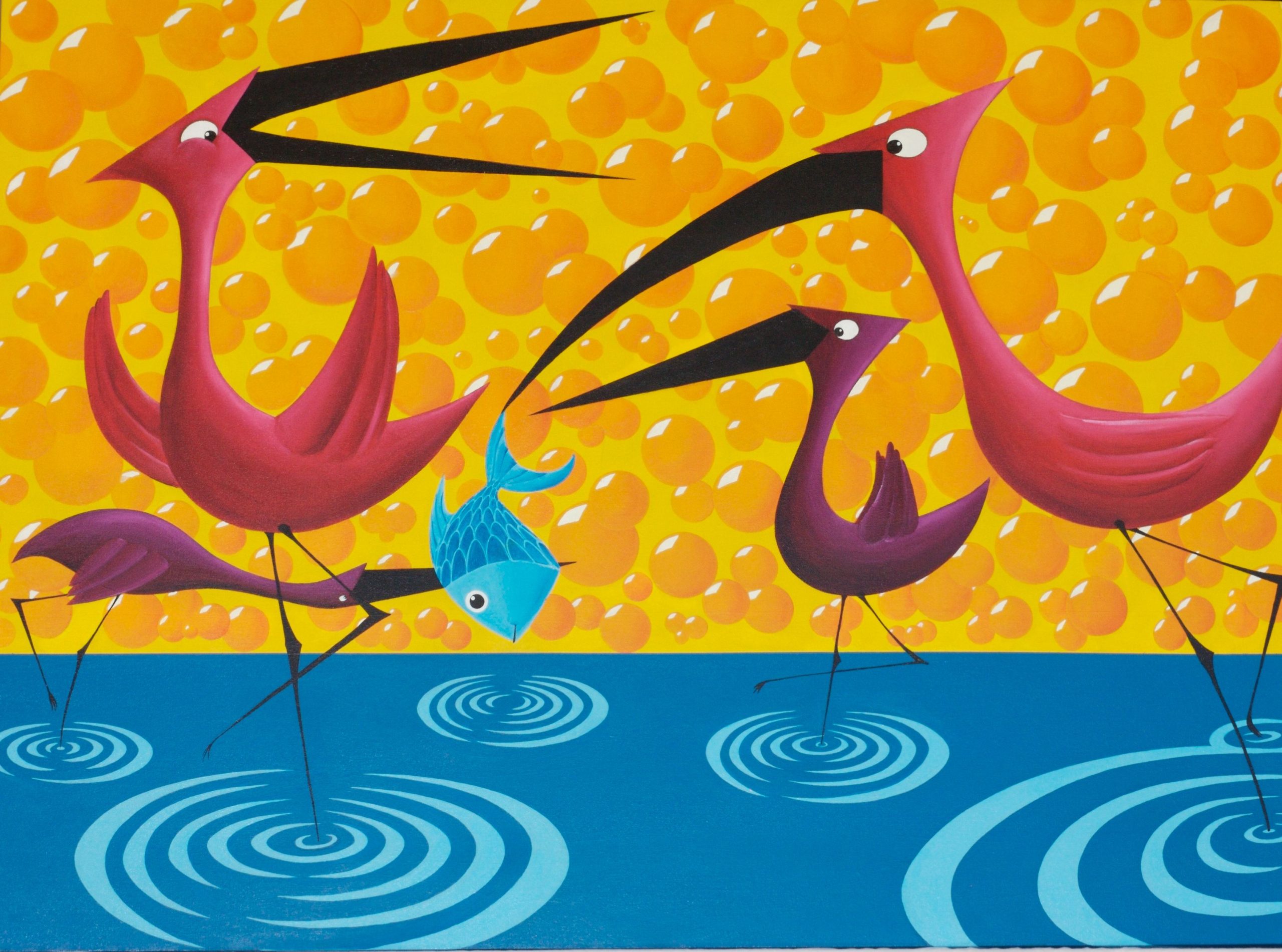 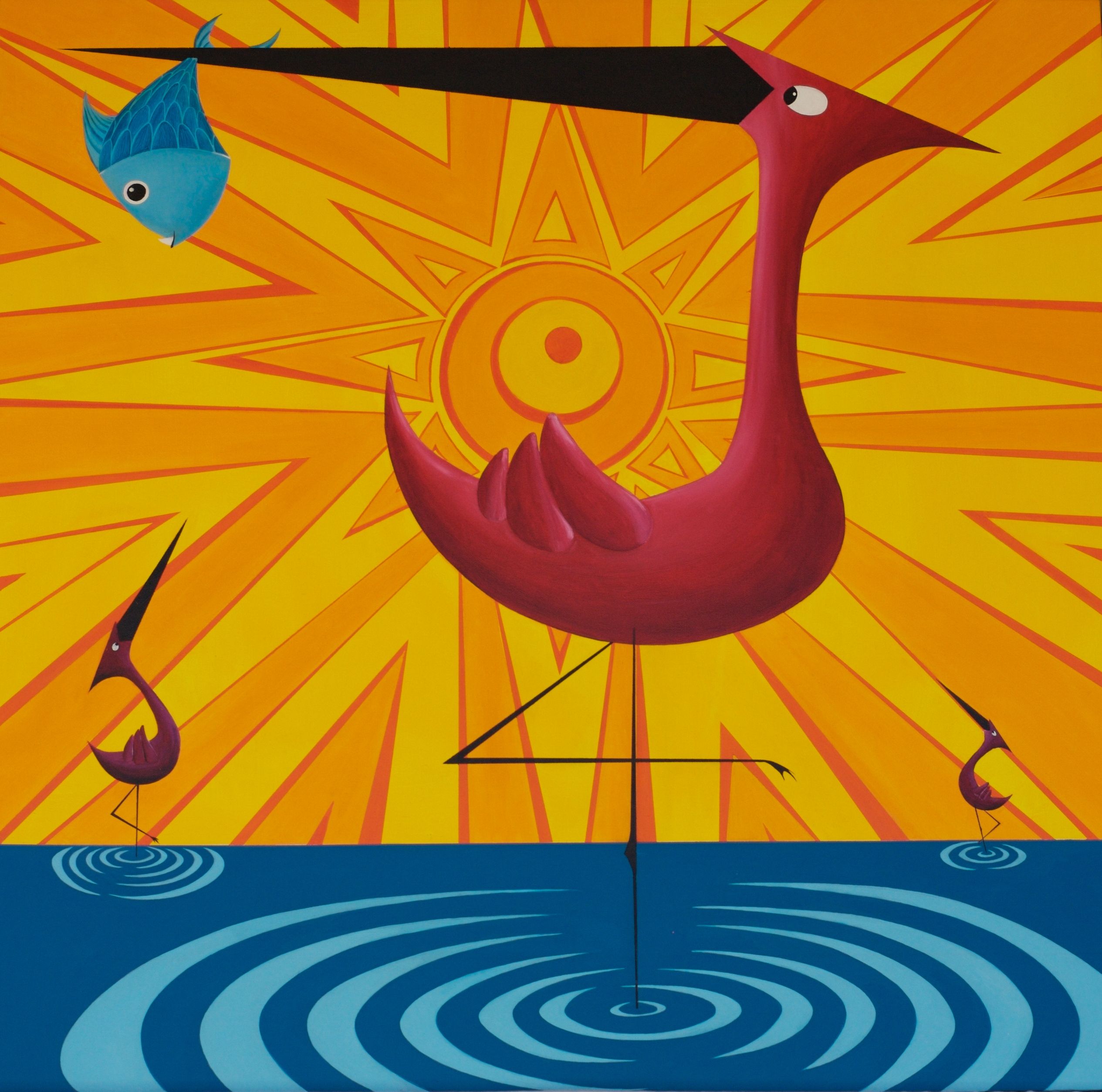 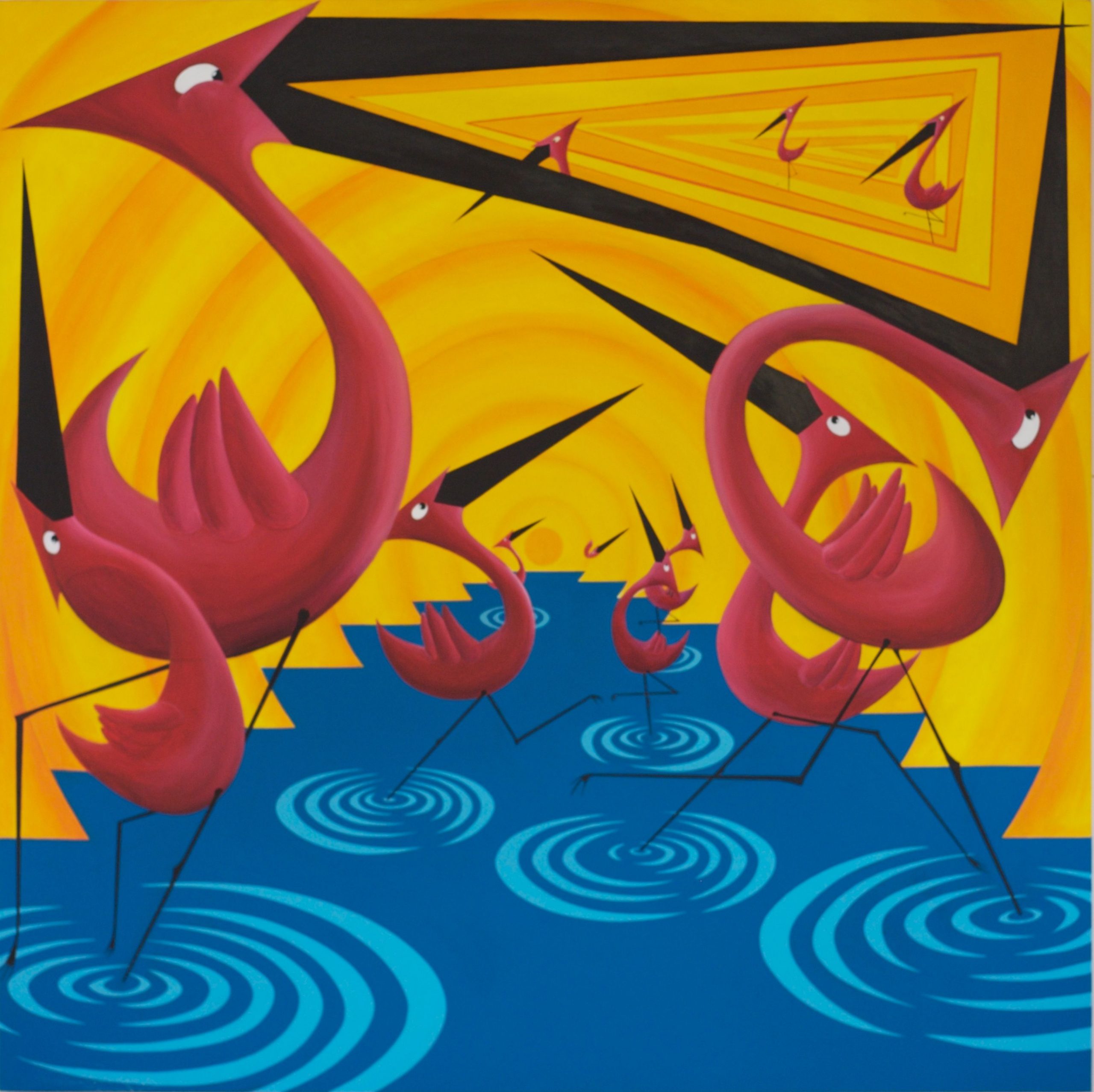 Brian’s “Pter-o-mingoes” (pterodactyl/flamingoes) came from a fellow-animator’s dream. “Here, paint this shape,” he said, passing Brian a line drawing on a yellow post-it. Brian did, and the result was a charming collection of lively birds.

Ravensdaughter is the art name for Erin Rado, editor of Celtic Nations Magazine. When in her creative space, Ravensdaughter – an homage to the warrior goddess, Morrigan, expresses Erin’s true soul.