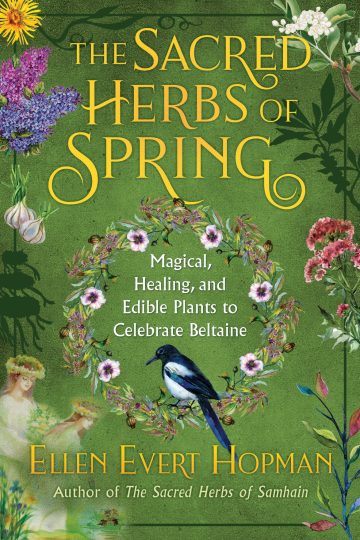 I was given the opportunity to review a prepublication manuscript of The Sacred Herbs of Beltaine and jumped at the opportunity with my love for her previous book The Sacred Herbs of Samhain.  The time of Samhain is when the sap of trees stops flowing and the trees become dormant for the winter.  Beltaine, six months later, is when the sap again flows and the trees wake up with the increase in daylight and warmth, a time when seeds germinate and plants begin to sprout.  At Samhain the veil is thinned between the two worlds, the waking world of our five senses and the world of the spirits, a time to celebrate visitation from our ancestors of the underworld.  Six months later the Beltaine spirits that come to us are playful, the fairies and elves of longer days and warmth, a time for celebration of love, fertility, and dancing around the maypole, a time when cows are led between two sacred fires, a ritual to protect them against disease before they are taken to their summer pasture.  Trees live in three worlds, the Underworld, the Land and the Sky, especially the sacred Oak and Ash that reach toward the sky with roots deep in the underworld.  Under these sacred trees people swore oaths and were married, trees that were simultaneously the church, the court house and meeting place of the elders, Druids and tribal leaders. Stones that also live in the three worlds are venerated in the Beltaine rituals.  The Sky World Gods and Goddesses are honored with the sacred altar fires, fires that reach into the sky.

The four ancient, sacred treasures brought by the tribe of Danu, i.e. the Sword of Nuada, the Cauldron of the Daghda, the Spear of Lugh and the Stone of Destiny, as well as the five directions: north, the direction of battle and fire; east, the direction of abundance; south, the direction of the creative arts; west, the direction of history keeping and storytelling; and the center, the place of mastery were celebrated.  The many kinds of fairies known by many different names throughout the world are central to the Beltaine rituals.  To keep on their good side special food was/is left at their many recognized dwelling places, e.g. under hills, on mountain tops, within the roots of trees, in deep caves, and under lakes.  Hopman’s description of these many fairies is especially enchanting, fairies as magicians and healers, fairies with which to bond, fairies that are pranksters and jesters, fairies that help with chores, protect the house and wine cellar, and fairies that help in the garden.  Special charms were/are made from the sacred herbs to be worn for calling upon them or for protection from the malevolent ones.

The next nine chapters describe the herbs along with their medicinal preparations and recipes for their consumption to aid in the different Beltaine journeys: Herbs for the Beltaine fires, for calling the fairies and elves, for magic and mysteries, for protection, for purification, for connecting to other realms, for courage and clarity, and for love, fertility and abundance.

The wood from nine sacred trees is used in the sacred ritual fires: Willow, Hazel, Alder, Birch, Ash, Yew, Elm, Oak and either Apple or Pine.  I have planted several of these trees in my Celtic Wheel of Light Garden and have described Hopman’s use of the sacred oak in my earlier review of the Sacred Herbs of Samhain. I have planted three Hazel sacred to the goddess because of the milk of the green hazelnut.  A good year for Hazelnuts is a good year for babies and cows.  A rod of Hazel prevents horses from being ridden by fairies and branched stems are used for water dowsing.  Powered nuts in mead relieve coughs and sinus problems and the inner bark tea relieves boils and warts.

Of the herbs for calling upon the fairies and elves I have a special affinity for the wood sorrel.  As a child when visiting my grandmother there was a patch of sorrel growing in her back yard that I enjoyed eating because of its pleasant sour taste.  My cousins and I called it sour grass.  The four leafed Sorrel may be the original lucky shamrock, and the three leaves represent the three Druidic worlds of Land, Sea and Sky and the triple high gods and goddesses.  Large clusters of Sorrel are recognized as favorite haunts of fairies and elves, so a gift needs to be left for them.  The leaves and flowers are good in salads, pestos and decorations for desserts. Its tea is used to lower temperatures, as a heart and blood tonic and used to treat diarrhea, stomach cancer, and liver and digestive issues.

The herbs for magic and mysteries include the turkey tail mushroom that I discovered growing on a dead ash tree in our yard. This mushroom is used in treating lung, gastric, colon and breast cancers.  It is also antibiotic, antifungal, antioxidant and antiviral.

The herbs for protection include plantain which I have planted in my garden of the nine sacred herbs of Woden.  When hung in the home or car or brewed in bath water it provides protective energy.  Medicinally crushed leaves stop the bleeding of wounds and the pain of the nettle sting.  Its juice can help lung, gastrointestinal, bladder stomach and eye problems.  Chewed leaves and salves relieve gum infections, insect bites, and hemorrhoids, and its tea is used for bronchitis, and bladder and stomach problems.

Of the herbs for purification Burdock was the first herb I ever used.  It is very effective for relieving the nettle sting when rubbed on the skin.  This herb of the fairies is used as a wash to purify rooms and ritual areas. The “Burry Man” covered with Burdock burrs is a scapegoat figure who goes from door to door, and with a shout the inhabitants give him money.  A poultice of leaves is used for convulsions, epilepsy, hysteria and other nervous conditions.  Its root tea is used for jaundice and bladder problems, and for cleansing the body systems.

The protein and fiber of the Pinto Bean, an herb for connecting with other realms, can lower risk of heart disease in people with mild resistance to insulin.  Originally from California I learned early to make tortillas and would fill them with frijoles or pinto beans. Many of the herbs that were previously discussed in the book are also used for love, fertility and abundance.

Of special interest to me are the last chapters that describe the ritual traditions of Beltaine in other countries, England with the witches, fairies and the Maypole, Ireland with the decorated Maybush and gifts left under a fairy tree, Scotland with its processions and songs, Germany and Sweden with their veneration of Saint Walpurga, and the Finish festival of Vappu.  Thomas Morton was famous for resisting the early Puritan Christians by hanging onto his Pagan sensibilities.  The concluding chapter provides a wealth of herbal recipes used in the feasts for Beltaine, many of which I am eager to try.

The Sacred Herbs of Beltaine takes us on a very enchanted journey into the world of fairies and elves, spirits that lead us along an avenue into the otherworld, the world of the spirits with the many herbs used for their protective, divining, purification and healing powers.

Buy The Sacred Herbs of Spring: Magical, Healing and Edible Plants to Celebrate Beltaine by Ellen Evert Hopman on Amazon.