The Twins of Knockainey by Jackie Paternostro 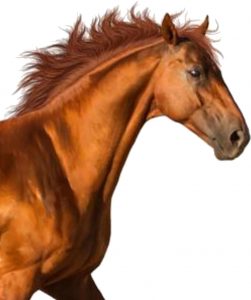 The sun hung high overhead. She could hear the children playing in the distance, laughing. Lowering her head, she nibbled the earthy blades of grass on the ground before her, as though content to hear the ruckus. Say what you will about Áine, she never meant to have these children. Notably, her penchant for mortal men was no secret, but no one would describe her as wanton. She was discerning by nature.
Her union with their father had not been voluntary. He was, to say the least, not to her fancy. The quintessence of power and age, King Ailill was hardly a consideration. He had come seeking her aide, but he had left her more than just his chivalry in the wood that day. Áine had seen to that. His ear, her trophy, cost King Ailill Aulom the throne, and his pride. In his arrogance, of course, the King regaled the kingdom with a different tale involving an otherworldly voice, and the poor King being held helpless and subject to the will of an evil sprite, finally severing his own ear whilst under a ghastly enchantment. Of course, only the faeries of Munster were privy to the true story.
It was with great mercy that Áine bore the fruits of that union, the twins. With the knowledge that she could not love them as her own, the Faery Queen resolved to leave them in the care of one who could. It had been twelve years since she had brought the twins to Ailis, tiny, fragile things they were then with flaming tresses that shone every bit as bright as their mother’s. They were never to know of the indiscretion which brought about their existence, only to be loved and raised to be good and kind.
Ailis did a fine job indeed. The children wanted for nothing, and the house was filled to the brim with joy and love. The two grew up to be happy and strong, and quite inseparable, both as beautiful as their mother and as willful as their father.
Fiadh was sweet and thoughtful.
Fyon was quick and clever, with an inquisitive and fiery spirit.

But giving them up had proved to be more difficult than anticipated, so here Áine found herself once again, watching. Fyon spotted her in the distance, just at the entrance of the glade, watching them as she often did. He felt a certain comfort in her presence, though she was but a strange wild horse that seemed fond to linger near the stones throw away from where the children spent most of their afternoons. She seemed to stay so long as neither of them vocalized her presence, nor attempted to approach her, and the three enjoyed each other’s company in this manner peacefully.
Until, on this day, one thoughtless step sent the seemingly deafening snap of a twig echoing through the clearing. Fyon’s head turned, and his bright eyes met her gaze for just a moment before she reared up and nearly flew through the clearing and out of view.
“In a daze again, are we?” Ailis called out as she approached the two. “Best head home. It’s nearly dark.”
Reluctantly Fyon trudged home, his mind swirling with questions that he felt best not to ask his mother. Strange, he thought; the horse always seemed to withdraw the moment his mother was near. There must be a cause to that, he held no doubt.
The next day brought with it the promise of another chance to find answers. The twins awoke, as usual, to the intoxicating aroma of breakfast wafting through the small forest cottage, and to the ethereal sound of Ailis singing as she clanged and bustled around the kitchen.
The two raced down the stairs to set the table. Over eggs, bacon rashers, white pudding and toast, the question that so burned in young Fyon’s mind seemed to spill out; ever so reluctant at first, like the first drop of honey from the jar, until it rushed out and smothered poor Ailis, who sputtered, choking on her breakfast.
“What was that dear?” she responded after catching her breath.
“I only asked, have you ever seen a red horse on the hillside?” the boy replied.
“A red horse?” she asked thoughtfully. “Oh my, yes dear. Not for quite some time mind you, but when I was young, I would often see her.”
“She comes to see us nearly every day!” Fiadh shouted excitedly.
Fyon glared at her disapprovingly.
“Oh, does she now?” mused Ailis.
“Yes, but she never lets us get close,” defended Fyon.
“That is not alarming my dears. Not a single soul can catch that horse. In fact, when I was a girl, they sang a song about her. Let me see if I can remember…”
Ailis’ melodious voice soon filled the kitchen as she sang the song…

Thund’rin through the leighs of Lim’rick like a gust of flaming wind,
A mare so wild and free, O’ the grasp of any man.
From the Celtic sea to Legananny, and all through Dublin Town,
The flamin’ mare glides on her way, nary a hoof upon the ground,

O’ run, O’run ,
But you shan’t catch her,
Be ye man, nor beast, nor fae.
You’ll ne’er catch the flamin’ mare,
Of the hill of Knockainey

Through the mists of Dunany, and all the Emerald Isle,
Sit a spell and ye may find,
She’s been watchin’ all the while.
Far swifter than the flying falcon,
Her mane outshines the sun.
Queen Áine would herself agree, of match there is not one.

O’ run, O’run ,
But you shan’t catch her.
Be ye man, nor beast, nor fae.
Láir Derg, Láir Derg, the flaming mare,
Of the hill of Knockainey

“So, no one can catch her?” Fiadh asked, looking at Fyon to make sure he was listening, almost as though reading the thoughts swirling through her twin’s mind.
“No”, sighed Ailis, “Not unless she wishes them to.”
The children finished up their breakfast and went about their morning chores before returning to their daily sanctuary in the woods.

“You’ll never catch her,” Fiadh reasoned as she reluctantly assisted Fyon in constructing a small wall at the back end of the thicket.
He had no hopes of catching her, he was not that dull. He had set his sights instead on trapping her. “I know sister, I only hope to slow her down.”
Fyon explained the plan to Fiadh, who now found it more sensible. She, too, was in search of answers.
“Perhaps she knows father!” suggested Fiadh.
Ailis had never offered any details in regard to their father, merely that he was a human and that the relationship was quite brief and “Hardly worth the story,” as Ailis would put it.
Still, the feeling that there was indeed more to discuss was unshakable. Today, they would find their answers. They would not let her get away. 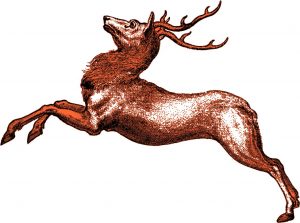 It was late in the day when the mare finally made her appearance, not long after the two had completed their special project. The sun hung low, casting its magical rays upon the whole forest. It shone so that her pelt seemed to glow like an ember. Her mane blazed with the red, fiery intensity of the midsummer sun melting into the Celtic Sea.
Without a moment of hesitation, or though it seemed, Fyon leapt forward and ran as fast as he could toward the mare. She quickly turned to run, and she was far more agile than anticipated.
His heart pounded in his ears as he raced on, and he felt a burning sensation surge through his body. He took a bounding leap forward, all at once transforming into a sleek young buck, with a pelt that rivaled his own luminous amber-red locks, his almost impressive antlers with a glow so fierce they almost appeared ablaze. 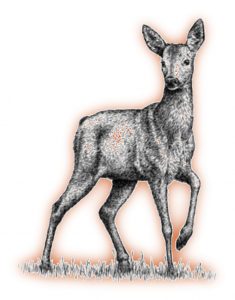 Stunned, he drove on. He had never done anything like this before. Being half-fae, the twins were raised with the knowledge that one day they may possess magical powers, but this was astounding!
On he drove, faster and faster, more swiftly than ever before. Running was almost effortless in this form. Fyon continued, steering her straight into the thicket, and toward their little “trap”. Fiadh followed in the distance, astounded by what she had just witnessed, and only slightly envious of her brother.
Unable to keep up, Fiadh fell behind. Not willing to give up she pushed on as fast as her two legs could go, pushing herself even harder, faster, until she felt as though her body was on fire. Still she pressed on, forcing herself near the breaking point. And she went on, swifter and more effortless now, as fast as her four slender legs could canter. She had done it! Fyon was far ahead, but she had done it! Fiadh had no time to admire her sleek amber-red pelt as she brought up the rear of the chase. Just ahead she spotted Fyon and the mare. What happened next, neither of them had anticipated.
In one fell swoop the mare flew overhead, gracefully touching down just behind Fyon and bounding on. To the end of the clearing she continued, until stunned, she stopped, meeting face to face with Fiadh, the doe.
At her heels Fyon quickly followed. The speed they had demonstrated may indeed one day rival their mother’s, outmatched it seemed, only by their cunning. Their abilities were indeed impressive. Áine, Lair Derg, had been caught, but perhaps that had been what she desired all along.