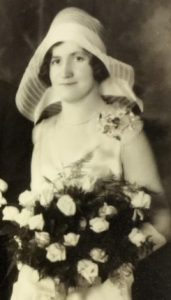 About fifteen years after Grandpa Tom’s death, I had just finished four years of college and three years of law school, and I was ready to take a break. I had a month free before my first job began and an idea popped into my head. Grandma Peggy had just passed her eighty-third birthday and was still in excellent health. She had not been home to Ireland since my grandfather’s death, and one of her beloved sisters was still alive, though in declining health. Why not go to Ireland and visit the relatives?

Why not indeed? Peggy eagerly agreed, and we made arrangements and headed to Ireland.

My grandmother was a wonderful traveler. She was the consummate good sport, never complaining and never cross. But she could be tough, even pushy if necessary. She was not willing to put up with bad manners or poor service. She spoke her mind but she never lost control.

Watching her assert her wishes reminded me of a subway trip I took with Grandma when I was a child and visiting her in New York. It was rush hour and she had me firmly by the hand. She was meticulously dressed in a wool coat and pillbox hat, and she was also armed with a hat pin. It was a wonderful tool for clearing a path through a crowded subway car. “Stay with me,” she ordered and I watched wide-eyed as people jumped out of her way. In a flash we were across the car and seated in the last available seat, me on her lap. Some poor man was shocked to find that he almost planted himself on us when he started to sit and before realizing the space was taken.

Grandma smiled sweetly. “Sorry, occupied,” she said, and the man, looking bewildered, moved on. “Never hesitate when making a decision,” she advised.
Travel from El Paso to Europe can be an exhausting challenge. El Paso is in far west Texas and requires a minimum of two plane trips before even beginning to cross the Atlantic. My grandmother did not bat an eye or utter a word of complaint. She clutched her pocketbook, which held a paperback novel and some knitting and was set for the duration. Although I knew she was old, I kept forgetting it. She didn’t act old.

Arriving in Dublin, we rented a car so that we would be free to travel around at will and visit with everyone who was available. By this time, my grandmother was used to some of the creature comforts of the American lifestyle. She was not impressed that we had to “wind down the windows” to get a breath of air. Still she was happily willing to play the role of navigator and back seat driver. As we maneuvered our way around Dublin and across the Irish countryside, she was frequently heard to mutter about the lack of signs or clear directions. Of course, if we found ourselves too lost, we merely stopped and asked for instructions and someone was always more than happy to help.

Our first stop in Dublin was for lunch with Peggy’s sister, my Great Aunt Sister Kieran, who had lived most of her life as a cloistered nun at the Convent at Cahra outside of Dublin. She was retired, as only nuns can be, living a serene life of prayer and introspection and living in a beautiful old convent, cared for by other equally elderly nuns. We were greeted with great celebration, and a scrumptious lunch was prepared for us. The sandwiches, sweets, and tea were served on a magnificent, paper-thin Belleek china tea service. I cringed each time the nun who was acting as our server banged the pot down on the tray, certain it would smash into a million pieces.
They fussed and catered to us and were genuinely thrilled at the visit. Everyone smiled and exclaimed and hugged and kissed us with expressions of joy. We were treated like royalty. Sister Kieran was not able to walk well or maneuver the many stairs in the convent. But no worries-whenever she needed to be moved from one room to the next, a bevy of nuns appeared from nowhere and whisked her up the steps as she perched gingerly on a wooden chair.

The Irish love to visit and American relatives coming home is one of the best excuses for a party. As word of our visit spread, invitations poured in. The good thing was we never had to plan a meal; the bad thing was we were expected to eat a feast at least five or maybe six times a day-breakfast, mid­morning tea, lunch, mid-afternoon tea, dinner and often, after-dinner tea. The Irish are magicians when it comes to laying a table. Even when arriving with no notice we were presented with baskets of freshly baked bread and muffins, cakes and pies baked from wonderful fresh fruits. Each feast was supplemented with a family favorite and frequently involved a ham or turkey ready for carving.

A challenge came when we were offered – no, presented – a ceremonial glass of the hard stuff. Being Americans, we were expected to be able to hold our whiskey. But I was small of stature and a nondrinker, with the exception of the occasional mild Pina Colada. I was in no shape to sip, much less finish, a glass full of straight, warm Irish whiskey. I did not like the stuff, and I had to drive us around the countryside.

My grandmother, seeing my dismay, whispered loudly, “Just dump it in a plant!”

I couldn’t do that; it would have meant the death of the plant and a waste of good whiskey. I finally just had to say, “No, thank you! I really, really cannot drink this and drive us home.” I am sure they were disappointed about the teetotaler American relative who could not hold her whiskey.

The month in Ireland flew by. We left after a wonderful experience with amazing memories. Best of all, I spent memorable hours just enjoying my grandmother.