What Did Jamie Fraser Drink Before The Sassenach?

In 2013, Tony Roberts (second from left below) and three former co-workers founded the Three Stills Company and set about opening the first Scottish Borders distillery in more than 180 years.

Among their spirits are Puffing Billy Steam Vodka, William Kerr’s Borders Gin , Lower East Side Blended Malt Scotch Whisky and Clan Fraser Reserve Blended Scotch Whisky – which is my focus because the vodka, gin and LES are not yet available in the states.

Production of Clan Fraser Reserve started in 2015, about a year after “Outlander” began streaming on the American cable network Starz and five years before actor Sam Heughan dipped his toe into the distillery waters with The Sassenach. The series, based on Diana Gabaldon’s novels, stars Heughan as the Scottish lead character Jamie Fraser.

“I’d never even heard of ‘Outlander’,” confessed Roberts. “Not until we started receiving emails from people talking about the show and asking, ‘Where can I buy a bottle of Clan Fraser Whisky?’”

That was my question! The sole importer of Clan Fraser Reserve in the U.S. is in Colorado. The same online search that led Clark Simm at Locoworks LLC (fourth from left below) to find The Borders Distillery, led me to order my first bottle from him. While binging on “Outlander” during the pandemic, I discovered ClanFraserScotch.com on my iPad.

As a relative ‘newbie’ to whisky (weaning off a single malt with a bourbon cask finish a mere five years ago), I wanted to make sure my neophyte palette wasn’t alone in its excitement. From a social distance, my Scotch-drinking buddies started sharing my enthusiasm over this smooth blend.

“That’s a great mouthful and finish,” said Craig Marotz, a former analytical services manager who has lived and worked abroad. “Full of flavor (and) a little peppery on the back on my tongue.”

“Very soft and flowery,” added Ron LaMee, himself a world traveler and my original whisky mentor. “It’s not a push-in-your-face Scotch.”

My neighbor Tom Weaver was reminded of a phrase he heard while playing rugby in the UK, “It’s like getting a slow kiss from Marilyn Monroe!” 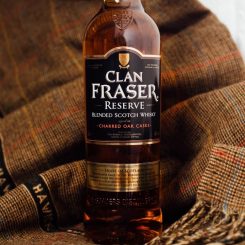 Lee Cooley started as a freelance film critic in 1978. After more than 20 years in TV, radio and advertising, he is now director of marketing & communications for a non-profit trade association. Cooley, a Scots-Irishman, is past president of Irish Network Arizona and a member of the Caledonian Society of Arizona. With roots in community theater, he has played a variety of character roles including his favorite, Elwood  P. Dowd in HARVEY at the Don Bluth Front Row Theatre.